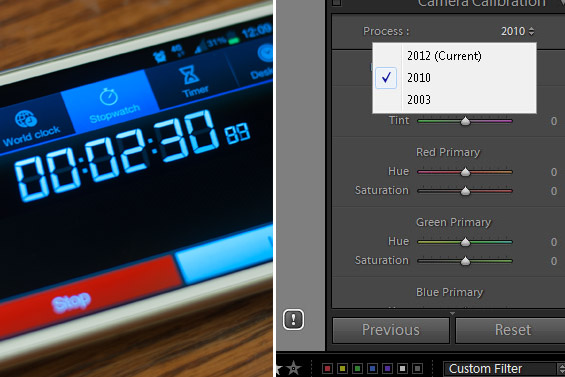 As most of our readers know, here at SLR Lounge we have a serious addiction to speed.  No, we don’t have a methamphetamine problem!  I’m talking about Lightroom processing speed, and overall workflow speed.  We are always pursuing of the next big speed advantage in post-production.  Because quite literally, time is money.   During the peak wedding photography season, our studio has up to 5-6 weddings in  a single weekend, which equates to about 15,000-20,000 images.  An editor would have to cull and color correct ~8 photos per minute for an entire 40 hour work week.  That ends up being just a few seconds per “keeper” image.

This year our addiction to speed has had some serious side effects, as Pye recently divulged.  In short, the “upgrade” to Lightroom 4 has been very bittersweet for us.  On the one hand, the new process version 2012 and the assortment of new tools at our disposal has been incredible.   On the other hand, Lightroom 4 is slightly slower than Lightroom 3, for the kind of speed we like to achieve.  Most Lightroom users probably don’t even notice the difference, if they’re already spending 1-5+ minutes to edit a single image.  The difference is only noticeable for those who are trying to fully correct an image in 5 seconds flat.

Anyways, I’ve been doing some testing.  Can you guess how I managed to significantly increase the speed of Lightroom 4?  Yep that’s right- roll back the process version to 2010.  After all the excitement about how beautiful LR4 renders tonal ranges, and how powerful LR4’s new features are, …just give up and go back to the exact same way our images looked in Lightroom 3.  Sound stupid and pointless? Tell that to Adobe who decided not to update Lightroom 3.6 with support for the Canon 5D mk3, the Nikon D800, and pretty much every other DSLR that has come out in 2012.  Oh yeah, THAT is why we all bought LR4…

Personally though, it’s not that big of a bummer to me.  I created beautiful images using the 2010 process version, and I can still do so today.  So with this in mind, I grabbed my stopwatch (phone app) and fired up Lightroom on an i7 Asus RoG laptop with an SSD and 8 GB of RAM.  A blazing fast machine in the days of LR3, but now aging prematurely due to LR4…  Enough talk, here’s the test results: 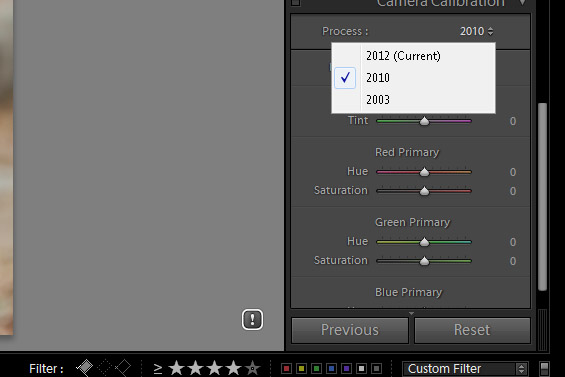 The difference is not really noteworthy, in fact I had to do the test three separate times on separate types of RAW images to verify that there is only about a 10% difference.  Plus, most of the time you can just walk away from your computer if you need to render 1:1 previews for a few thousand images, so usually this time won’t be “wasted”.  However every so often we do need to render 1:1 previews on the fly, so now we at least have definitive info.

This test was very difficult to accurately measure, so I averaged different trials.  What I did was, I went from shot to shot, waited the split second or so for the develop module basic adjustments to become available, and then applied five adjustments while waiting to see each adjustment take effect each time.  (As opposed to just cramming five adjustments down it’s throat all at once)

In every trial, the cause of the slow-down for PV 2012 was very clear:  I spent way more time waiting for adjustments to “un-grey” and become available when going from shot to shot in the develop module, AND waiting for adjustments to take effect on the image.  Even on an SSD with an i7 core, Lightroom bogs down every 2-3 adjustments with PV 2012.  I literally have to wait a full second or two for LR4 to catch up, when trying to apply 5 edits as fast as possible.  And those seconds add up.  With PV 2010 on the other hand, the computer never needed to rest.  Shot-to-shot times are noticeably faster, and all adjustments seem to visualize almost instantly.  Just like I remember in Lightroom 3!

I wondered if the above results were just a fluke or if I wasn’t timing myself accurately enough, so I pushed the test to the absolute threshold of possible editing speed.  I timed myself while applying 10 adjustments to 100 images, using a keyboard hotkey program.  (No mouse-over required to adjust multiple parameters)  By this time, there is no denying it:  PV 2012 is definitely the slow-down culprit, NOT LR4 itself!  It is almost twice as slow as PV 2010 after just 5 adjustments per image, exactly twice as slow with 10 adjustments per image, …and probably worse the more you edit.

You’re probably wondering- should the average Lightroom user worry about this difference?  Probably not.  I’m talking fractions of a  second here; basically I’m whining about the difference between “split second” and “instantaneous”…  If you’re already spending more than 60 seconds per photo in Lightroom, switching to PV 2010 won’t save you any time.  In fact it will probably take MORE time to edit those tricky images, considering how powerful PV 2012 is at tonal management.  Post-production Pye has thoroughly proven this with the LR4 preset system-  it takes far fewer clicks to correct an image in LR4 compared to LR3.

However, say for example that a high-volume wedding photographer needs to color correct 1,000 images per week, and they just want the absolute fastest workflow.  The difference between 5 or 10 seconds per image is already a potential savings of ~80 minutes per 1K photos.  Maybe you shoot about 25 weddings per year?  That’s over 24 hours per year, just sitting at your computer waiting for an image to load or an edit to apply.  Like I said, the seconds add up…  Real-world conditions might double or triple that time.

Verdict:  For now, PV 2012 is a slug.  But at least LR4 still has the potential to be fast.  Essentialy, Adobe has given us two options with Lightroom 4:  New and improved image quality, OR the speed we were used to with LR3.  It is unfortunate that for now the two cannot come together. (For mere-mortal computers)

BTW, before anybody mentions it:  Why not just go back to LR3?  I already hinted why.  In fact to be honest I didn’t even bother doing this test in LR3, because Adobe decided to forego support of the Canon 5D mk3 and Nikon D800.  And 50%+ of what I edit today are RAW images from those cameras…

We are now on the 4.2  release of Lightroom 4, so there is still a little hope for improvement in the next few free updates before Adobe just gives up and makes us pay for an official 5.0 upgrade.  I personally would find this to be a slap in the face, and I really hope that we see a 4.X update that gives us a significant efficiency boost in PV 2012.

Either that, or we all gotta build 4GHZ dual-CPU 24-core machines with PCI SSDs etc. etc. …Argh!