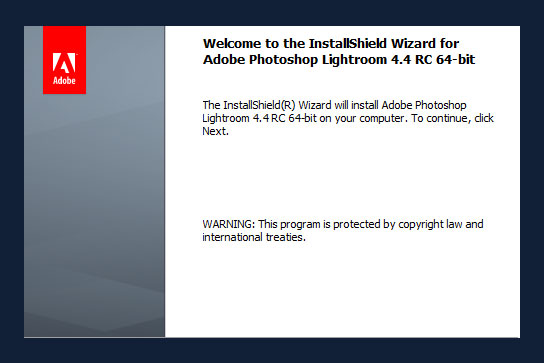 Lightroom 4.4 and Camera Raw 7.4 Release Candidates Are Out!

One of the good things about Adobe is that it has been diligent in releasing timely updates to Lightroom and Camera RAW in order to read the RAW files of the newest batch of cameras released, as well as provide new lens profiles and other fixes.

For those who may not know, Adobe typically releases a “Release Candidate” (RC) so early adopters can test it out and give feedback. It is essentially the finished version of the software update and for most users, the difference between the Release Candidate and the final version will be unnoticeable. The only caveat with the RC version is that there is an expiration date that coincide the release of the final version. In this case, the Lightroom 4.4 and Camera Raw 7.4 Release Candidates will expire on April 30th, 2013.

The biggest fix here is the improved (hopefully) RAW interpretation of Fujifilm cameras and their the X-Trans sensors. So if you own one of the Fuji cameras, then this download is a definite must.

And of course, if you bought yourself a new Hasselblad Lunar (really!) or the other handful of new cameras supported, or just want to take advantage of the new fixes made in Lightroom and ACR, then you should download the new versions, as well.

You can go to the following links from AdobeLabs.com to download the new Release Candidates:

$20 Off Lightroom 4 Purchase until March 2nd

As a side note, if you don’t have Lightroom 4, there is a $20 off coupon when purchased through Adobe. Just add Lightroom 4 to the cart and enter this promotional code: LIGHTROOM20. Offer expires March 2nd.

The following issues have been fixed in Camera Raw 7.4 release candidate:

Why is it no longer required to place the plug-in file in the specified directory on my hard drive?
The Camera Raw update process has grown to include lens profile and camera profile files which are easiest to install via a single installer process instead of updating several different directories manually.

Gaming + Photography... Does it get any better than this?

The Power of Social Media: 3 Steps For Organising a Photoshoot in a Foreign Country | Tuesdays With Lauri