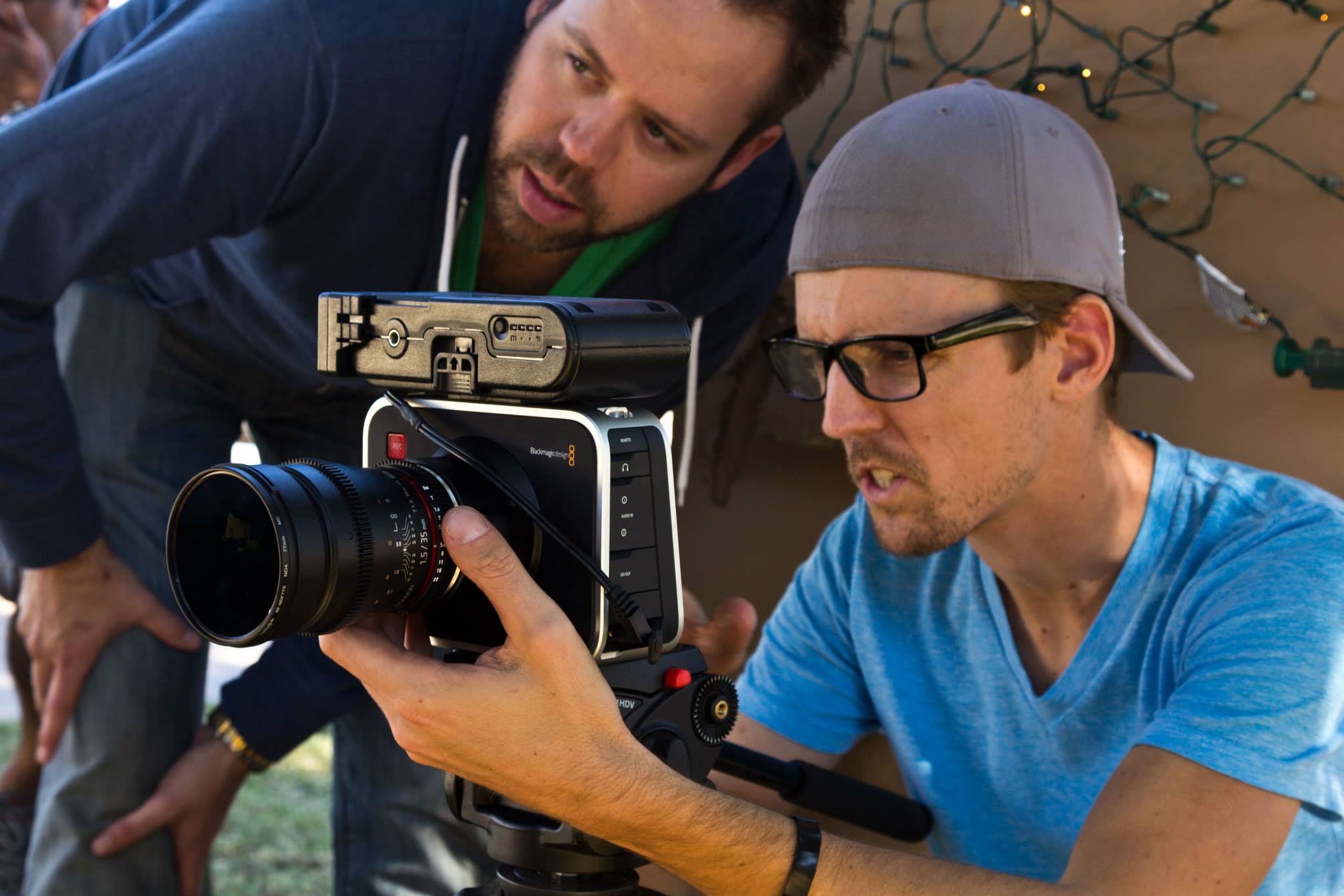 Tips & Tricks Learned On The Journey from Stills to Video

You can’t stop time, but capturing a special moment in an image comes pretty close. I always knew I wanted to be a part of that, even if just as a service to myself and my family’s memories. I always had a passion for storytelling and naturally gravitated toward a creative career working with still and moving images. But it was my work as a professional photographer that would best prepare me for working in the world of video and film. Today, I consider myself well versed in both and would recommend anyone in the still photography business to explore bringing their skills and expertise to moving images.

Now that I’ve got some larger credits to my name, like winning the Doritos “Crash the Super Bowl” Competition with my commercial, “Time Machine,” and a feature length movie that’s currently in post-production, I’m able to look back at the path I’ve taken to get here and recognize the pivotal steps that lead me to where I am today. Without a doubt, one of those steps was taking the time to learn both photography and videography. The way I see it, the two go hand in hand. Not only can it increase your income, but also learning one discipline can help improve the other. So if you have mastery of taking stills and working with the equipment available today, you’re already one step closer (if not a few steps) to working with video. 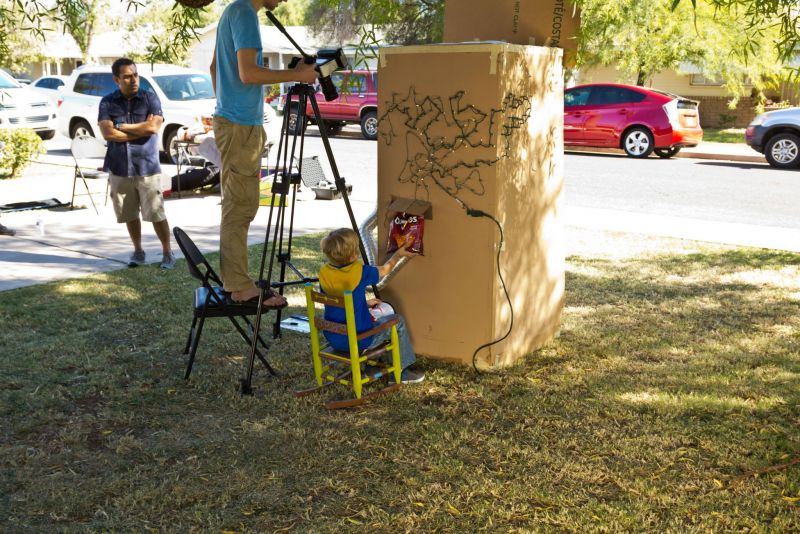 Professionally, I started out in wedding photography, and because I also had a passion for and understanding of video, I was able to seize a few opportunities and eventually offered both services with success. Being versatile allowed me to grow professionally. Knowledge is power and while it may seem cliché, the more you have, the more valuable you are within your industry.

Even though I primarily see myself as a filmmaker now, getting my start in photography really forced me to learn all of the different details and settings that went into capturing an image, and I had to learn which variables did what to the final image. For example, you should understand how to balance your ISO, shutter, and aperture. If you have an ISO of 200, you’re not going to set a fast shutter speed, because you know that will produce a darker image. You also need to learn about the settings so you can use them to produce your unique look.

If there’s one thing I can recommend to someone trying to get into this business, whether as a photographer, videographer or both, it’s to experiment, first and foremost. There’s no self-destruct button on these tools (my first grade computer teacher taught me that). Just try things, find out what your gear is capable of, be a little bit of a scientist, take notes and go.  When you think about it, cameras are just like any other device. You only get better with time and practice. Think about the iPhone. What was once a foreign object is now probably something you can’t live without. The same goes for photography and videography. I used to bring my camera everywhere with me, shooting whatever I could and learning on the go. 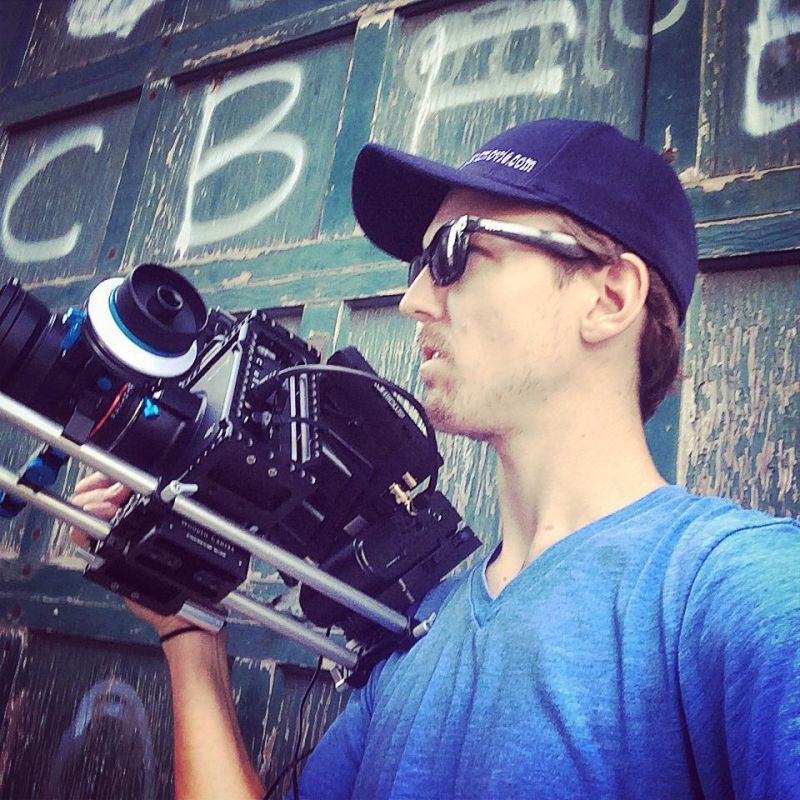 When I bought my first video camera, I did the same thing. I would go to a restaurant with a friend and start filming (and yes, my subject of choice did know the camera was rolling). It was the perfect way to learn how to shoot motion without burning anyone’s time. If you’re making the transition into film, try doing the same. Film the glint of light on silverware, the sweat dripping off a glass of water, and you’ll get familiar with moving images fast.

[RELATED: From Stills to Motion Series]

The one thing I realized when getting into this industry is that you don’t have to be an expert with all of the camera dials and buttons from the get go. I was so nervous when I shot my first wedding. I thought the bride was going to freak out and ask for all of her money back. When I handed her the wedding album, she started crying because she thought they were so beautiful. As a photographer or videographer, it’s our job to capture truthful moments. So be in the moment, and realize that mastering the tools will come with practice.

I’m still using the first digital film camera I ever bought from Blackmagic Cinema Camera. Little did I know that this was a turning point in my life, as it eventually lead to my breakthrough into the film industry. I think of the Blackmagic Cinema Camera as the iPhone of cameras, because just about anyone can use it right off the bat. It’s so easy to understand. 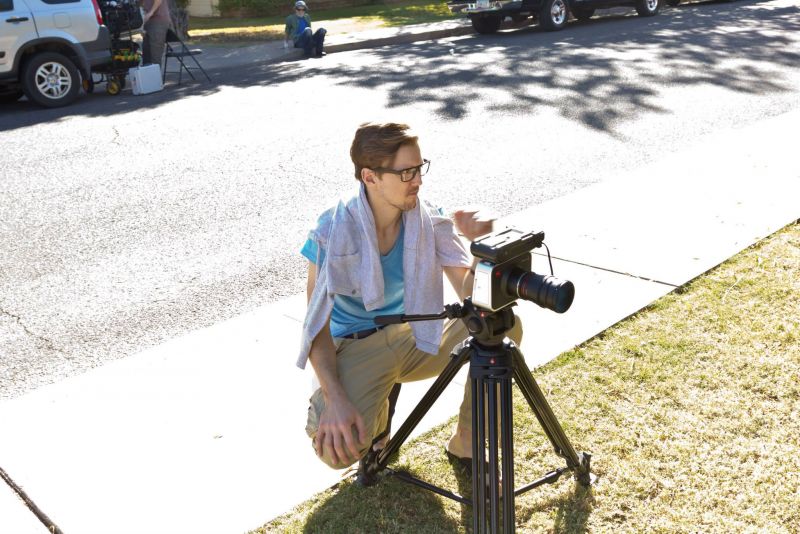 You just flick through the settings and go. It was especially helpful when I was first transitioning into video. Because the image quality of the camera is so great, I was able to learn from my mistakes while still producing beautiful footage. It gave me the confidence boost I needed to bring my work to the level of other professional photographers and videographers in the industry who had been working much longer than me.

Photography and videography are also very similar when it comes to setup. You need to know how to light things properly, and if you understand lighting concepts in photography, it will translate to digital video. It’s important to keep in mind, however, that with digital video, there is movement involved, so a typical photography setup won’t always work with video.

This is when natural light can really come in handy, and location scouting is an absolute necessity. You have to know where the sun is going to be at the time you plan on being at that location, where shadows will come into play, and be aware of the weather forecast for that day so you can plan accordingly.

One thing that is well known in both film and photo is the magic hour. The hour after sunrise and the hour before sunset where everything is magical and golden and perfectly lit. It’s something to keep in mind, especially when you can’t afford professional lighting. 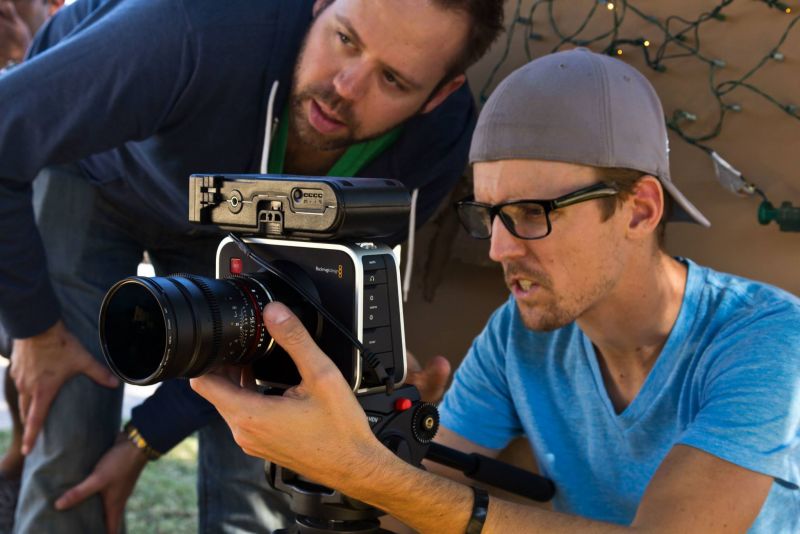 A lot of equipment is used when I shoot, but if we are talking my go-to’s, I love my Rokinon Cine Primes. When I’m shooting video for personal use, I prefer to use my Blackmagic Production Camera. (However, I have been patiently waiting for their new mini URSA 4.6k).

Be Your Own Teacher

Apply what you know from photography to video. ISO, shutter speed, aperture, focus, lighting, etc.…these are all concepts that apply to both still and motion images. To learn the process of shooting digital video, all you need to do is run around and shoot footage, but don’t be ignorant to the process. That was one of the biggest mistakes I made when I started shooting. It wasn’t until I went back to photography that I learned a lot of what I needed to know about video, like how to manipulate the settings, why a steady shot is so important, and the importance of investing in a good lens. Generally, when you come from photography, you know a lot of this already.

Make mistakes but make them work for you. Good things come out of them. You’ll learn and the next time you’re on set, you’ll know exactly how you can fix your footage so it comes out the way you want it to. No one can tell you it’s a mistake but yourself, and that’s the beauty of it. The key is to try and improve with every project.

One of the coolest things about creating images is that you can always adjust an image in post. If you understand how to use Photoshop, learning how to use video editing and color grading software, like Blackmagic DaVinci Resolve, will be that much easier for you. It’s like riding a bike, just a different bike, with gears. You’re working with 24 pictures now versus one. That’s all film is, a bunch of pictures strung together, so the same concepts apply, like working with colors, pushing and pulling highlights to give a flat image more dimension. It feels familiar, like an evolution of the photography post process. Again, it’s a process that, when you stick with it, will soon become second nature. 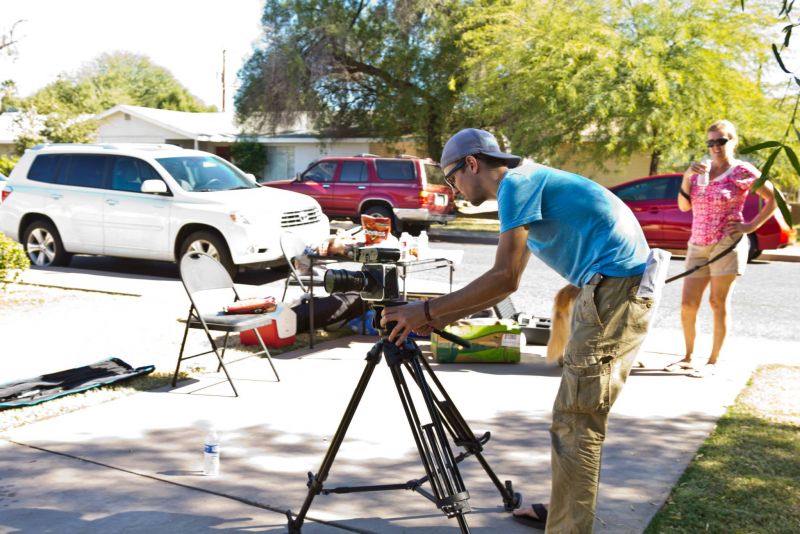 A Piece of the Pie

It’s really hard for some people to make the jump from photo to film because once they’ve perfected a craft, it’s hard for them to accept the notion that there can still be more to conquer. As a photographer, it’s common to think of a filmmaker like, “Oh, that’s the video guy, not me.” I will stand and defend this claim until the day I die: there is a big enough proverbial pie for us all to get a piece. We all have different perspectives on life and different things to say.

There are a lot of people out there who are very talented photographers. There are also a lot of talented filmmakers and cinematographers. There can never be too many because they each offer a different point of view. Because everyone has a different perception through the lens, everyone can survive in this industry. Don’t be afraid if you’re looking to make the transition from photo to video. The unique point of view that you’ve developed through photography will translate into your film work and separate you from every other artist out there.

Making the swap, or better put, the addition, is a means of future-proofing your career and livelihood. You’re going to get more work, and you’re going to be happier with the quality of your images. Don’t get discouraged. Learning a new skill is a challenge, but the benefits far outweigh the learning curve. If you stick it out, you’re going to be successful, guaranteed.

When it comes down to it, you’ll either be great at two crafts, or you’ll strengthen your chosen one. You can’t fail with that. 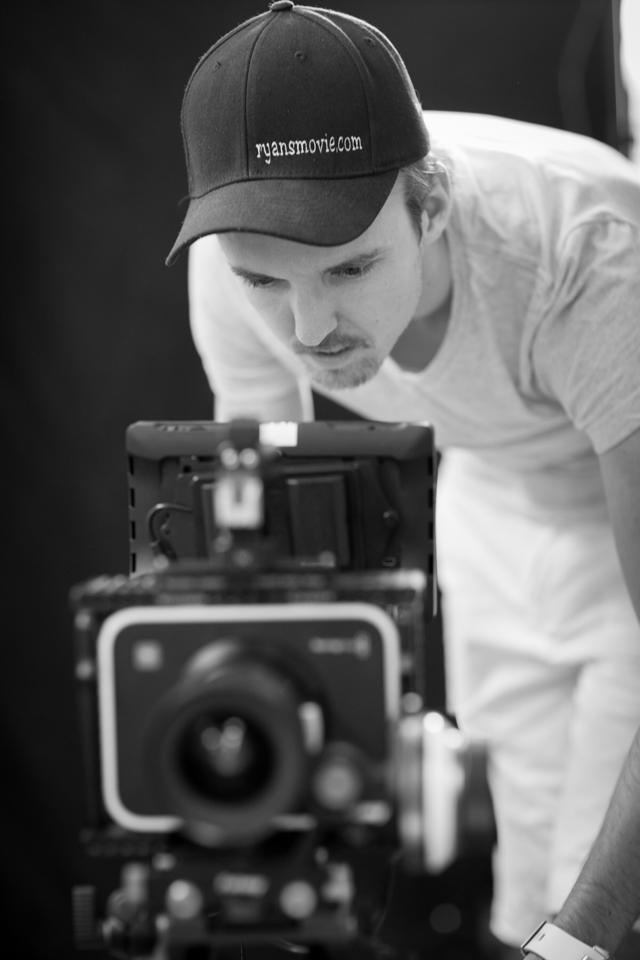 Ryan Thomas Andersen is a single dad who works as a freelance commercial director to pay the bills. Ryan has always aspired to become a filmmaker. When his now 8-year-old son Gavin came along, the dream was put on hold — if only for a moment.  Now Ryan is in post-production for his first feature length  Visceral Experience, “IM’perfect.”

Sony A7II Review | Proof Size Isn’t Everything, It’s How You Use It

Photography History: The Evolution of Cameras Shown in Portraits