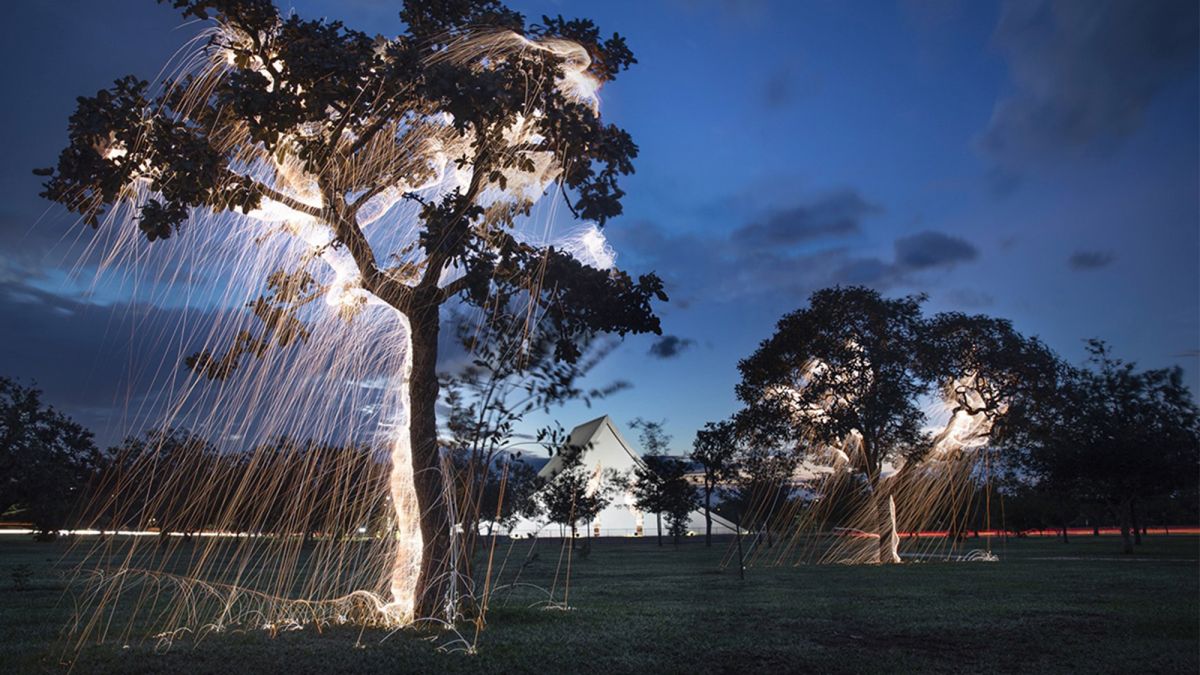 As any photographer will tell you, to create an image of any type, the most important element is the light and how you shape it. Brazillian photographer Vitor Schietti has taken that idea and gone even further with his work. Starting in 2015 he started a series called Impermanent Sculptures where he uses the Light Painting technique to envelope trees and other natural formations with streaks of light on fire, creating a set of glowing ethereal landscape images that look just like magic.

Creating these images is no simple task. Vitor has to plan ahead and perfectly time his exposures. Once he’s set up his camera and exposure then he and his team have to get to work lighting up the landmarks using fireworks (don’t try this at home), to create the streaks of light we see in his images. Sometimes he’ll be able to capture everything in one shot, but often he has to capture the subjects in small chunks and then composite the image together in Photoshop later.

“I use a neutral density filter to find the perfect balance between the brightness of the sparkles and the natural light by twilight, so it’s a fine and limited balance, only a few minutes each day.”

We got the chance to briefly speak with Vitor and ask him a few questions about this wonderful series of images, check out his responses below;

We’d love to know how you first got into photography/videography?

As a child and teenager, I liked drawing and painting, especially with a nankin pen and watercolor. I started photographing on film when I was 16 and soon got really into the pace of this medium, much faster than drawing or painting. When I got my first DSLR in 2006, my relationship with photography grew stronger and faster. At this time I started experimenting with long exposure, often in the streets and metro of Montreal, where I was living for a few months. I don’t think I premeditated, but in long exposure and later on, with light painting, I was going back to the watery brushes of a watercolor painting, and I really liked the ideas that kind of image evokes: the fade of memory, the dream realm, the shape and colors of thoughts, our emotional body…

[Related Reading: Light Paint with ANY Camera in 4 Minutes!]

What Gear/software do you use to create these images? ND Filters/Camera/lens/tripod etc?

Are there any BTS shots of you creating these?

Absolutely! Check out the video below to see the behind the scenes

What keeps you motivated to keep shooting and creating?

What most inspires me is to discover new places, natural landscapes, culturally rich cities… learning about humankind and its relationship to Nature is what most drives me towards seeking for the next project, the next photo, the next connection, and also the next climb as I’m an avid rock climber, another great way to be in contact with Gaia. I like collecting ideas turned into images, they can be either from observing natural things occurring or from creating images that are the result of directing models, performances, digital tools, and a mix of techniques.

What s the best advice (business or technical) you’ve received?

In business, a piece of advice I still have to go back to often is to offer what people actually want to hire/consume. That is to say, whatever you are doing can be of great value to you, but is it also valuable to others? I think that can also apply to the way I do art: I seek imprinting value in it that goes beyond my personal taste, but which is very much coming from my personal world views.

Do you have any tips/advice for someone looking to get into this genre?

Experiment, try to combine techniques, try different settings to each idea, you’ll only know what works and what doesn’t by doing it over and over. Don’t expect to have it right on the second attempt, and when you finally do it, know that you have to look into the next level of whatever it is you chose to do.

To point out one single image is really hard, but there’s one image of the series Impermanent Sculptures that I particularly like for all the challenges I had to bring it to life, and the fact that it came out as one of the best in the series adds up to it: Memories of an Ancient Time is that image. I was with a group of friends in a beach by the town of Trancoso, Brazil. I had taken sparkle and also sky fireworks on a quest for an interesting scenario to create an Impermanent Sculpture until I found this rock formation by the sea and decided that was it. When scouting for locations it’s always a combination of intuition and luck, coz at one point when the light is fading, I can’t get to choose much longer.

To create this image I had the help of a friend to trigger the fireworks that I mounted on the sand pointing at a very low angle, the idea was to get the sparkles coming from the sky but it had to be close to the ground, otherwise, it wouldn’t even be in the frame. Predicting the trajectory of the fireworks like that was a bet, and also I had to put the camera on the timer at the right time, get myself far from it, and hope that the capture would be a success. It turned out close to what I had imagined, and the final composition with the sparkles that I drew with the rod on the ground created these figures that remind me of the Three Kings, thus, Memories from an Ancient Time.

View more of Vitor’s work below and on his pages here;

Finding Strength and Perspective Through Hardships with Jen Rozenbaum