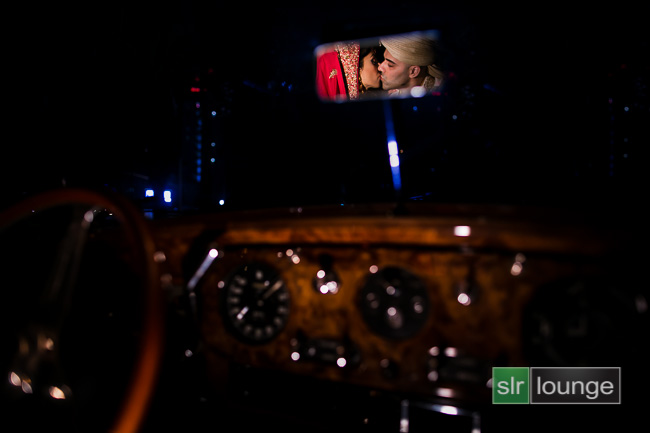 How We Shot it – The Rolls Royce Evening Mood Shot

This past weekend while shooting for our studio Lin and Jirsa Photography, my wedding clients had hired a Rolls Royce and chauffeur for their grand departure. They had expressed their wishes to get some nice shots of the car prior to leaving.

Since they wanted these shots at night, I knew lighting was going to be a challenge since I don’t like my backgrounds falling to complete black. So, my thought was to use the front windshield as a backdrop since it would reveal a little bit of lights and color from the street. I wanted to reveal the dashboard detail as well, since it was such as strong feature of the car’s overall look. Then I used the mirror to creatively frame them into the shot.

Because of the limitations of the overall working space. My correct exposure for the subject lighting was at 1/200th shutter, F/2.0 and 800 ISO. However, in hind-sight I should have simply gone with 1/100th shutter and brought the ISO down a stop. Consequences of rushing sometimes ;) 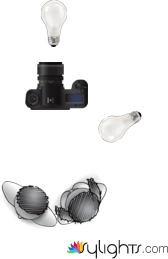 This diagram might be a bit tough to decipher, so let me help. We used two regular tungsten constant lights (Pick up some cheap LED Video Lights on Amazon

The keylight is just one of these tungsten video lights aimed directly through the front passenger window at the subjects. The second tungsten light I have placed just under my camera to light up the dashboard of the car.

Then, with my 24mm, I am simply framing my subjects in with the mirror, while finding a good angle for the dashboard in the shot.

Post processing was done in Lightroom 4 using the Lightroom 4 Preset System, then we did a little bit of cloning/healing of distracting elements in Photoshop. We will feature tutorials on the production side later.

How We Shot it - Environmental Portrait with Singer-Songwriter Sabrina