SLR Lounge > Originals > How I Shot It – “Anger” | Tuesdays With Lauri 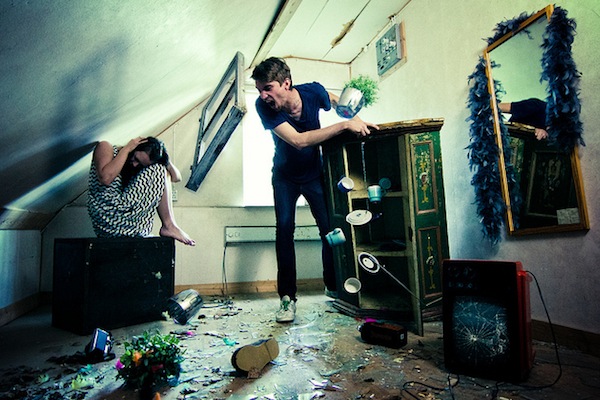 How I Shot It – “Anger” | Tuesdays With Lauri

For this week’s “Tuesdays With Lauri”-article I decided to go way back into my archives and pulled out this image called “Anger”. Today we will take a quick look at the story behind the photograph, and then after that I’ll provide you with a step-by-step breakdown of the editing process. 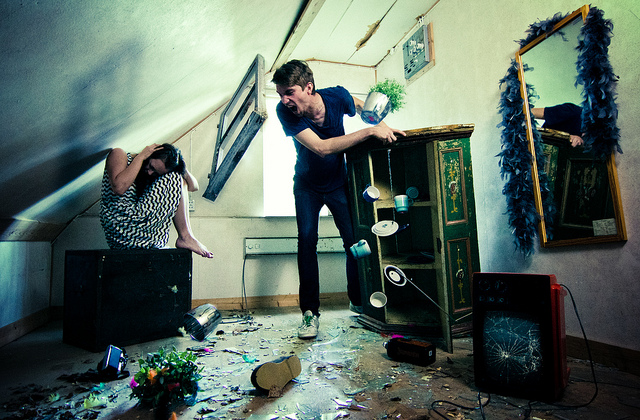 Last summer I took part in a photography camp/workshop and every day during that 7 day period we were challenged to create a photo based on the assignments we got. We had about 18 hours to come up with a concept, shoot the photo and edit it. On this particular day we were challenged to create a photo based on one of the “7 deadly sins” (anger, greed, sloth, pride, lust, envy, and gluttony). As you might have already guessed from the title of my photo, my sin was anger. But to make the project even more challenging, we were given a color that we had to incorporate into the photograph. My color was green, which was pretty tough to put together with anger, as green is often thought of as the color of balance. It also means learning, growth and harmony. So, all in all green and anger really don’t work together that well… Because of this fact, I decided to use the green color as an accent-color and that way didn’t let it “dominate” over the other colors in the photo. As you can see in the photo below, I brought in the green color with the plants, the cupboard and we even had the male-model use green shoelaces. 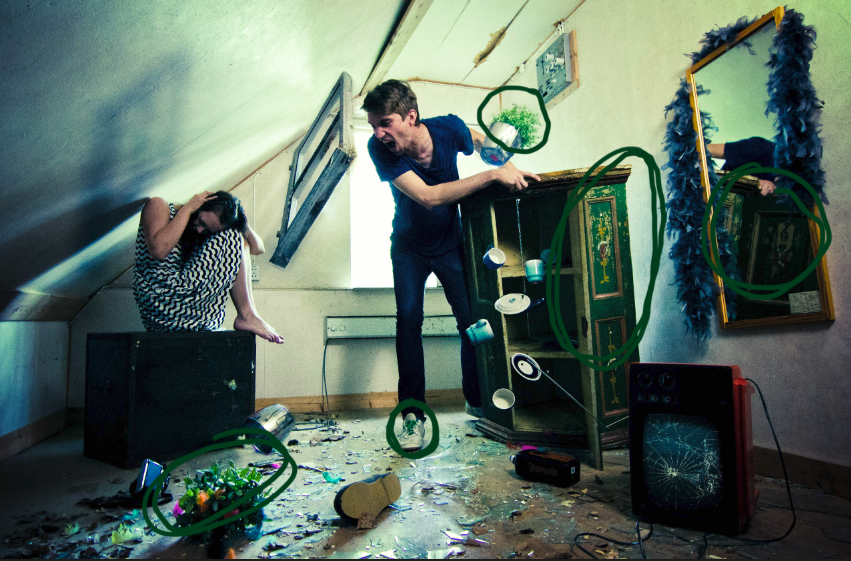 The concept behind this photo was to present the feeling of anger in it’s most extreme form, and also to incorporate it’s external effects on other people around us, by bringing in the female-model into the photo as well.

Breaking down the editing process

The photoshoot lasted about 1,5 hours and after cleaning up the room, I started editing the photo. The time was about nine o’clock in the evening when I started editing, and I edited the photo all through the night (about 8 hours of editing). The editing process included a lot of careful masking, positioning all the elements in their places, making sure the composition worked, adding realistic shadows, and color-grading, of course. Once I finished the editing in Photoshop, the PSD-file was almost 2GB in size.

So, lets start out by looking at the base-image: 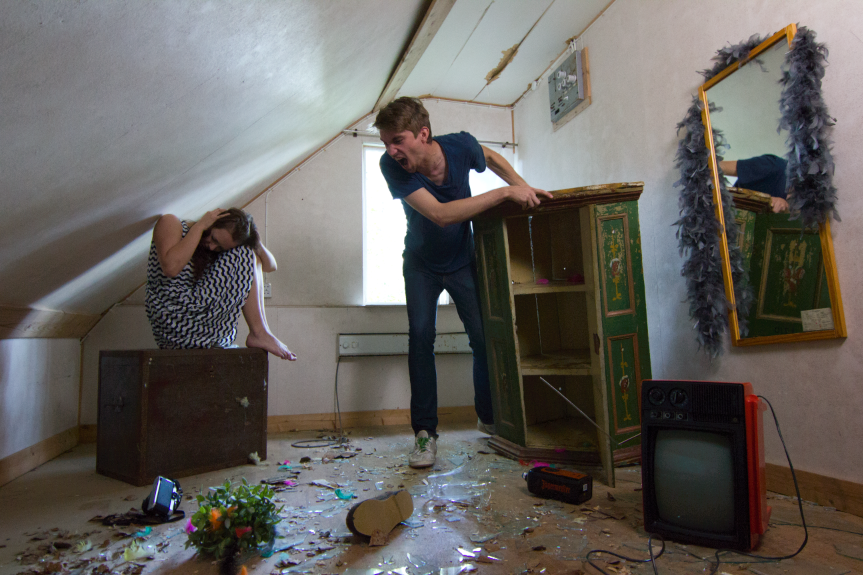 The whole scene was lit with one softbox which was positioned on cam-right, just outside the frame. Our models were back-lit with the light coming out of the broken windows, so we used this softbox to fill in the shadows.

We experimented with several different expressions and finally found the one that we liked. Once we had figured that out, and were happy with the base-image, we continued by photographing the objects that would be flying through the air in the final image. We started out with the huge window-frame and the green plants. Here is a photo of our model holding the window-frame: 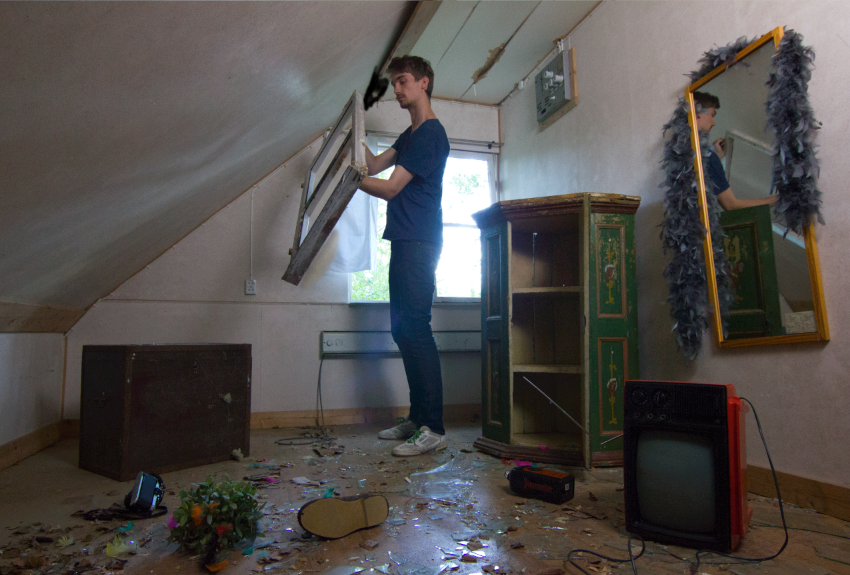 Once those were photographed we shot the coffee cups and other objects flying out of the cupboard. Here is a quick shot of how we went about doing that: 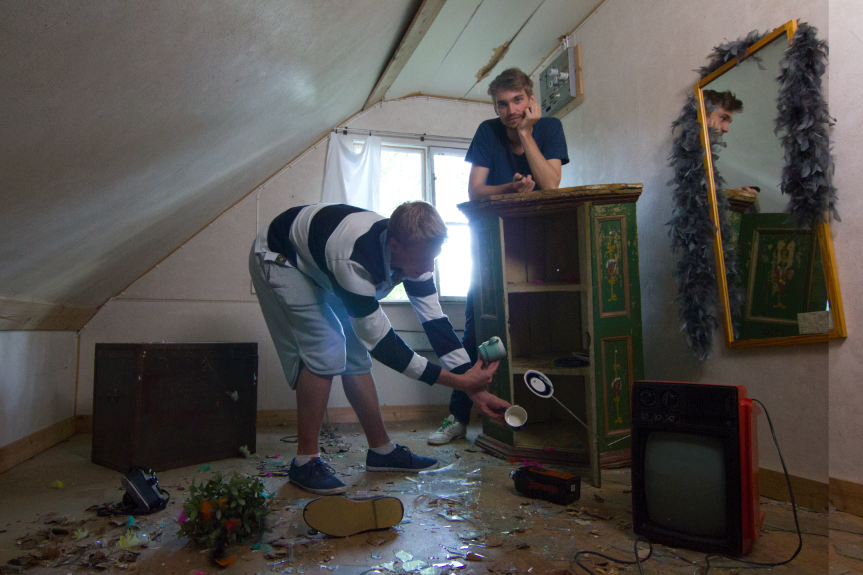 I used these above photos and carefully masked the objects out, so that I could really refine their position in the final photo.  You might have also noticed that I applied a “broken window/screen” texture on the screen of the TV that is lying on the floor. 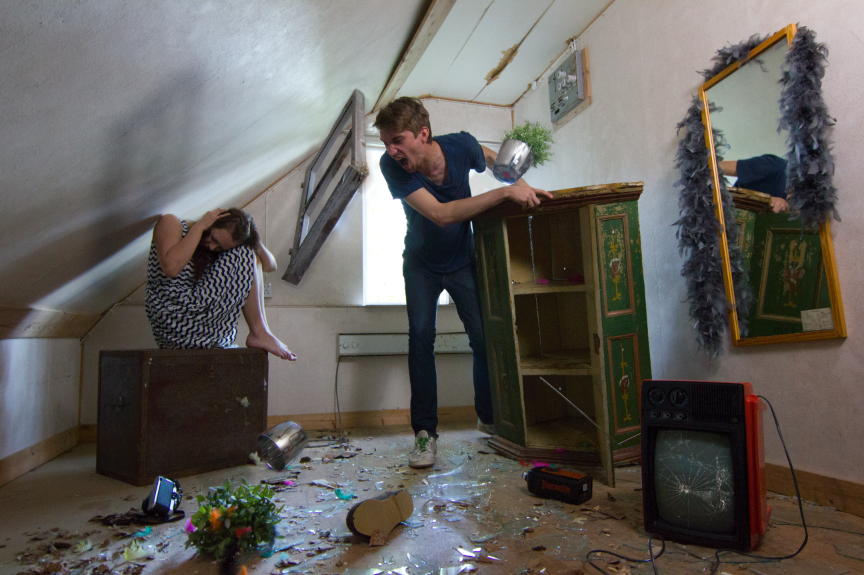 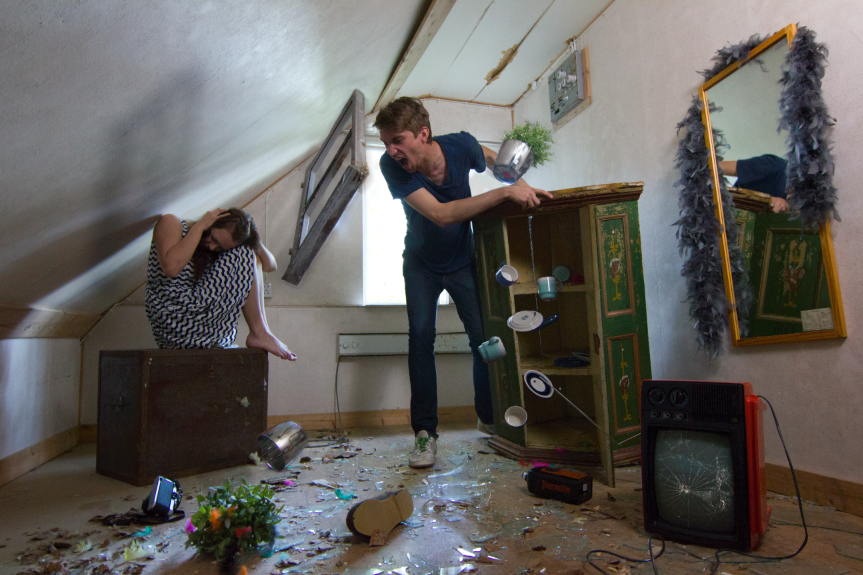 Once I was happy with the composition I spent around 30-40 minutes refining the colors. I used the curves-adjustment panel for most of the color-grading (read more about color-grading in photoshop here: https://slrlounge.com/colour-grading-with-curves).

1 hour of setting up + 1,5 hours of shooting + 45 minutes of cleaning up, and 8 hours of editing resulted in this image:

As always, if you have any questions about this article, please leave comment down below, or message me on Facebook.

Kickstarters We Love: Chukotka - A story from the End of the Earth