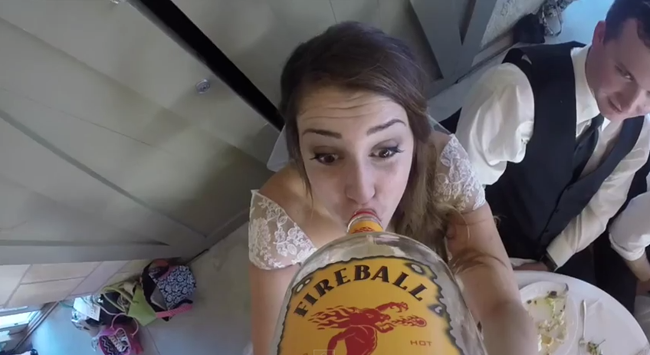 And the award for best use of a GoPro goes to…

We’ve seen some remarkable GoPro videos since the inception of the take everywhere camera. With the GoPro we’ve gotten up close and personal looks high up the mountaintops, deep in the depths of the ocean, even out into space – giving us unprecedented point of views from the eye line of daredevils, animals and even Hello Kitty.

One brilliant wedding guest took GoPro awesome-ness to a new level when he attached a GoPro to the side of a handle of Fireball and passed it around on a wedding day. The video, as you can imagine, is a hilarious 2 minute compilation of people taking shots out of the bottle of whiskey.

If you’ve never had a shot of Fireball, it’s a popular cinnamon-flavored alcohol that tastes like the old ‘Atomic Fireball’ candy you had as a kid…it just makes you hurt the next morning.

The OCD in me hopes that the alcohol content (66 U.S. Proof – in case you were curious)  killed all the germs that were passed around that day, but after watching this video, it was totally worth it.

Chris Hadfield On Shooting & The Importance Of Your Heartbeat