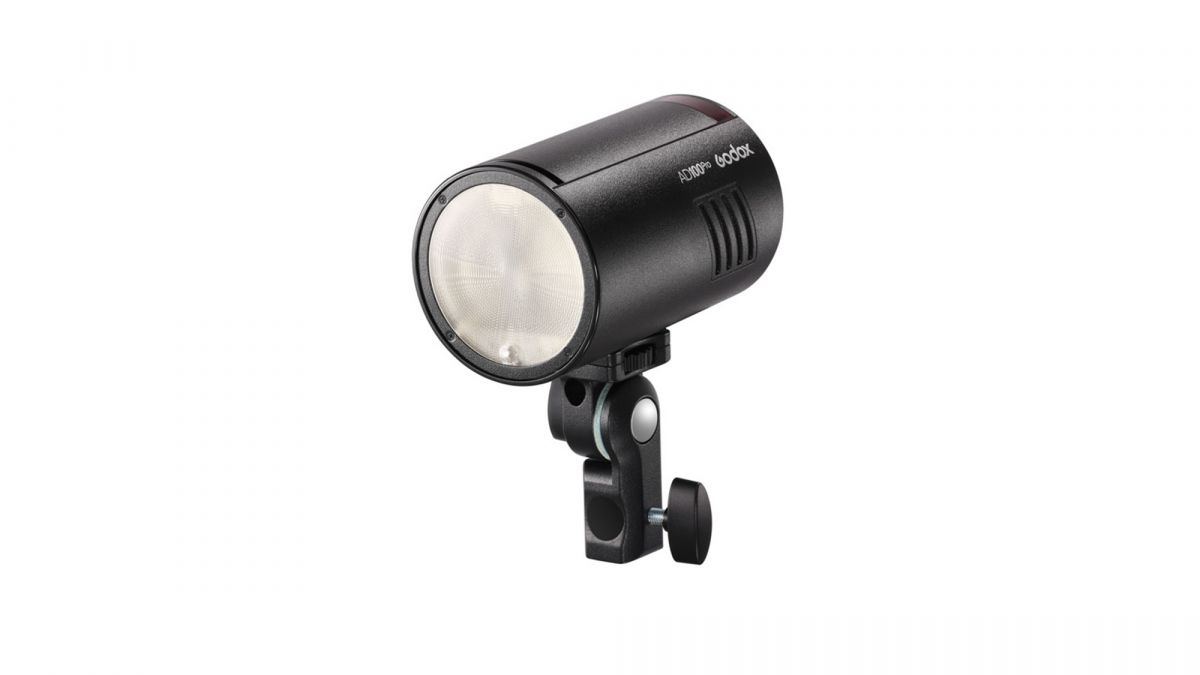 The first thing that you will notice is that it looks like a soda can. It’s small, compact with a cylindrical body, and a round flash head. The flash body looks like a scaled-down version of the AD300 Pro, but it comes with a round Fresnel flash head similar to the Godox V1. Unlike this Speedlight, the AD100 Pro has been designed as an off-camera flash. This new strobe has been considered to fix directly to a light-stand using a bracket (AD-E2 included).

Highly portable, you can throw it in your pocket or bag, making your photography journey a breeze. Why not go for a 6 pack and make it a party!

Whom is this strobe for?

Probably not for studio photographers, but content creators that are constantly working in different locations. The newly announced Godox AD100Pro seems to blur the lines between strobes and speedlights. With its small form factor and lightweight design, Godox has seemed to focus on ensuring that this strobe was as portable as possible for photographers constantly on the move.

Part of the Ecosystem

It has been almost one year since Godox released its last strobe, the Godox AD300 Pro. It seems that Godox has put much of its focus on LED lights in the last months. So far, they have released five different types of lighting devices, the most popular ones like the Godox VL series and Godox SL II series.

A can-shaped design and weighs about 18.5 oz. (524g), including its battery. Many would assume this light would be about half as powerful as the AD 200 but that’s not the case.

A 2.4GHz Godox X-system radio receiver is built-in, and the unit uses a removable 2600mAh lithium battery that claims to support 360 full-power pops from a single charge (it is the same battery used by the Godox V1). Recycle time is 1.5 seconds. Power control is from full to 1/256 output in manual mode in (1/3 or 1/10 stop increments), but you can also use the lamp in TTL mode and with high-speed sync. Full power is 100Ws. There is a 1.8-watt LED modeling lamp.

On the side of the flash are 1/4″-20 tripod sockets for mounting to light stand adapters. The front of the Fresnel is the same as that used by the V1 and AD200 round-head adapters, so it works with the AK-R1 accessory kit and with the Godox S2 adapter for Bowens softboxes. There is a 28–85mm manual zoom to adjust the beam. The device weighs 524 grams including the battery.

It works with major camera brands by connecting the X1, X2 or XPRO trigger to your camera. Godox flashes, including the AD100Pro, are compatible with cameras from Canon, Fujifilm, Nikon, Olympus, Panasonic, Pentax, and Sony. Utilizing Godox X wireless technology, the AD100Pro can be used across 32 wireless channels in up to 5 groups. The wireless range is just under 330′ (100m).

In terms of sync speed, via high-speed sync (HSS), you can shoot with shutter speeds as fast as 1/8,000s. Additional flash modes include first-curtain sync and second curtain sync. Recycle time ranges from 0.01-1.5 second, depending upon flash power.

Godox has an extensive ecosystem built around the AK-R1 Accessory Kit.  Like the V1 and AD200 Round Head, the AD100 Pro can use these clever, stackable magnetic accessories as well.  Wish this little flash was a bare-bulb-style strobe?  Attach the dome diffuser. Need a small pop of color? Gels click in place elegantly with no gaffer tape required.  Add an AK-R1 kit to your strobe using the dropdown menu above!

The small, circular body of the AD100 Pro allows it to place nicely into most photography bags alongside lenses and other camera accessories. This allows for easy portability and the ability to carry a very powerful flash! The size is simply 120x76x76mm.

The AD100 Pro is built for the professional in mind with a strong and sturdy build, such as the included reinforced stand mount. The stand mount features an umbrella socket and 2 metallic threads that slot into the undercarriage of the AD100 Pro.

All of your existing Strobepro or Bowens-mount modifiers will work with the AD100 Pro using the optional S2 Bracket.  Toss the bracket in the bag with your modifier, and keep the strobe in its tiny form in your camera bag.

The Godox AD100 Pro supports TTL (automatic flash power) and high-speed sync when an appropriate controller is connected to your camera.  It’s game-ready for your next fast-paced photo adventure.

[Related Reading: What Can You Do With the AD200 Pro from Godox?] 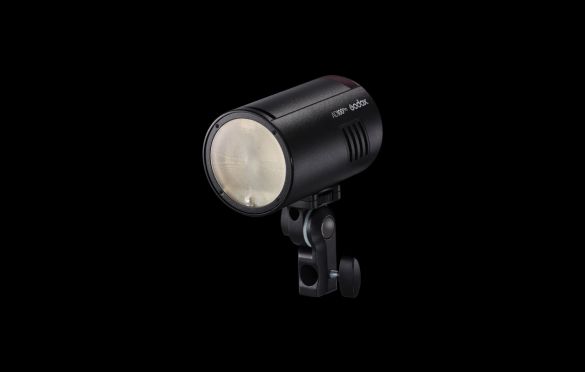 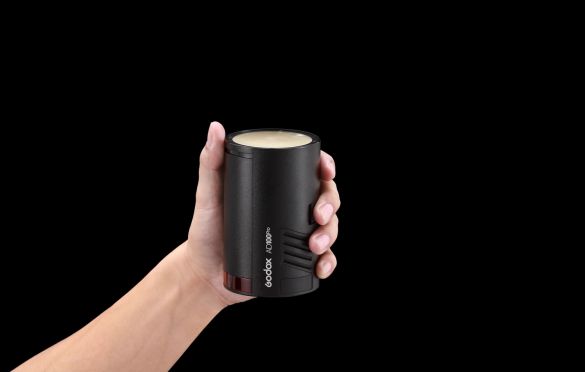 What´s in the Box?

This new strobe is very small, comparing in size to a can of soda. Godox has a track record of manufacturing great flash heads at a relatively inexpensive price (compared to the competition) and their AD lineup (AD200, AD400, AD600, and Pros) have saturated the photography market across the world and the newest addition will benefit a lot of photographers, especially newbies who are just getting into flash photography and looking to experiment.

Of course, it is fair to mention that it leaves crossed feelings as the power that it generates, might not justify the price or the reasoning of not using a Speedlight instead, such as the V1. However, the portability and versatility of this new addition might also be the point of interest for visual content creators who were looking forward to having this entry point to Godox´s AD lineup.

[Related Reading: Godox Officially Reveals the AD1200 Pro – Its Most Powerful Strobe Yet]

What can you do with this strobe?

Professional photographers show through their workflow the creative possibilities for this little device.

Luke Edmonson had a project in mind and explains that “the idea was to test out the AD100 Pro by shooting kids on location using simple storytelling concepts. Two of the shots we created used only the AK-R1 attachments for our modifiers. For the other two, we used Bowens mount modifiers. That way we covered the versatility of what this light can do. We found that we enjoyed its small size, lightweight, and flat bottom which made it easy to sit on top of a piece of furniture or handhold if needed.” 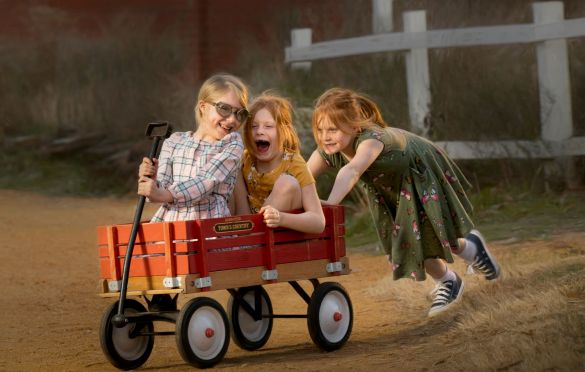 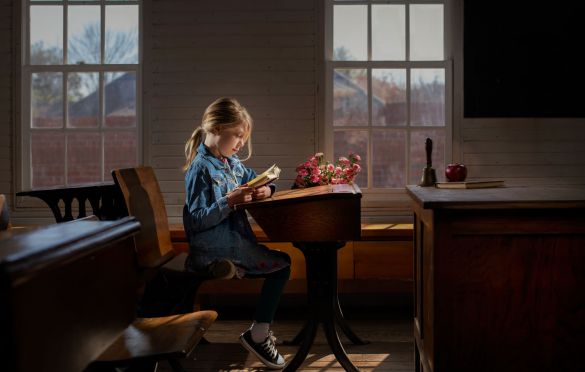 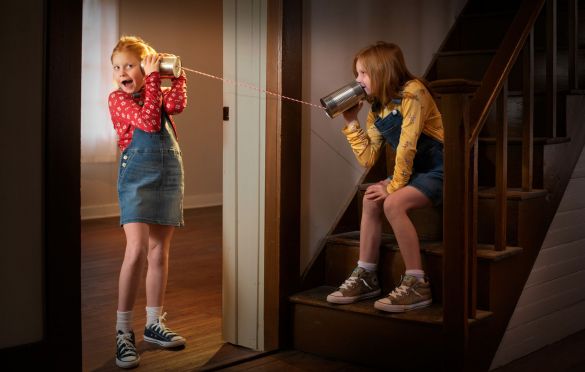 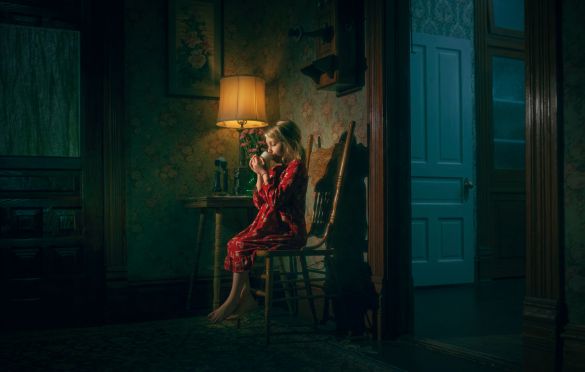 Here is a “behind the scenes”

Henry Söderlund highlights “I appreciate the size of this flash. It’s minuscule yet it packs quite a punch when it comes to flash photography. It’s so easy to hide even straight into the shot itself as a pocket of light which makes it capable of on-location indoor photography. To truly get the potential of this flash I recommend getting the Godox AK-R1 modifier kit because it adds flexibility for various situations” 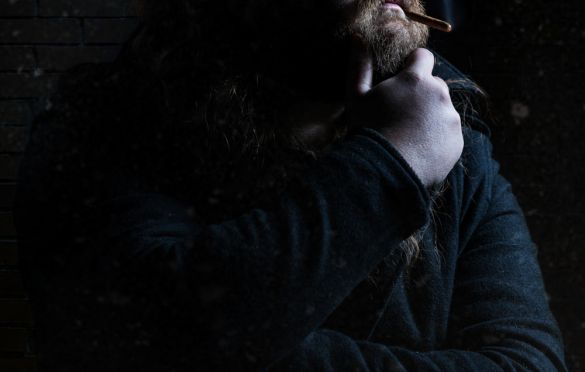 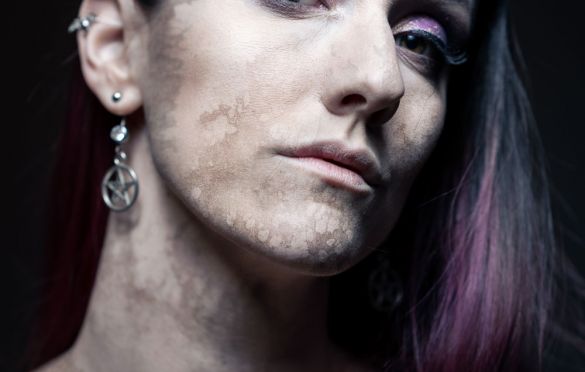 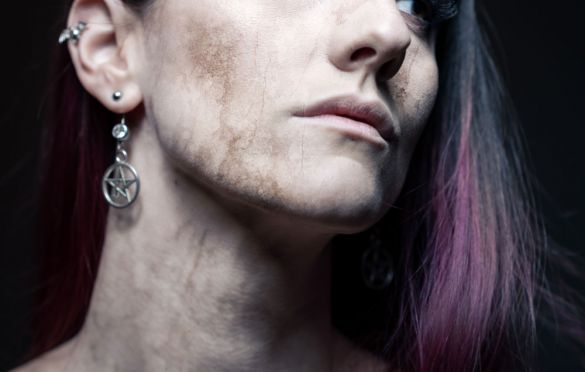 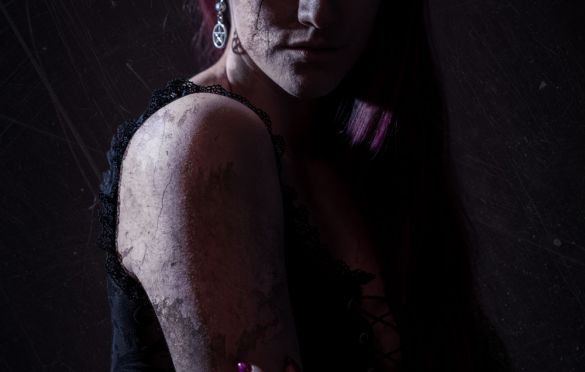 Francisco Hernández explains “I’m currently using the 100 Pro for my portrait work. It has surprised me in how much power it offers during the day as a main light, but I will primarily be using it for rim light. Since this light doesn’t have a Godox or Bowens mount it’s best used bare or with the Godox Ak-R1 accessory kit.” 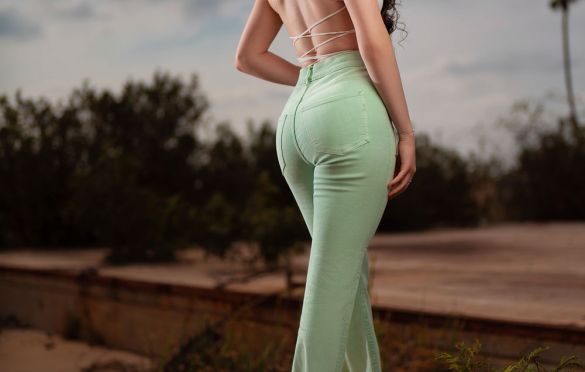 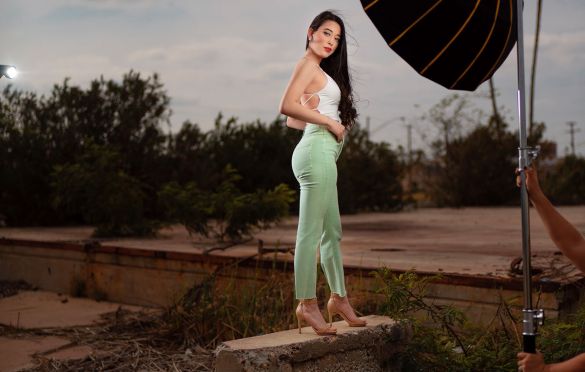 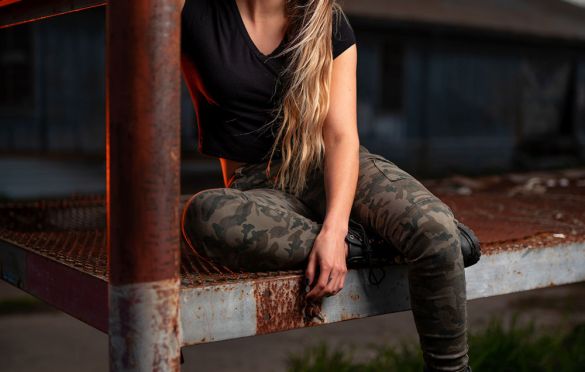 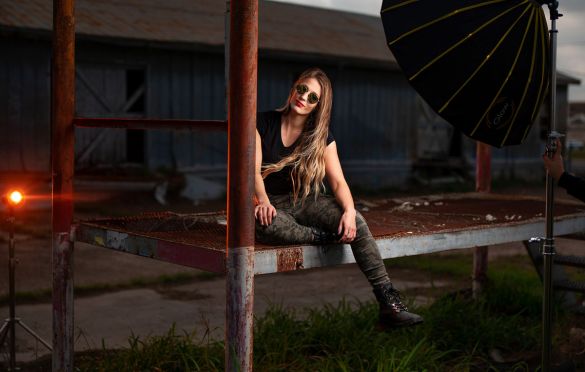 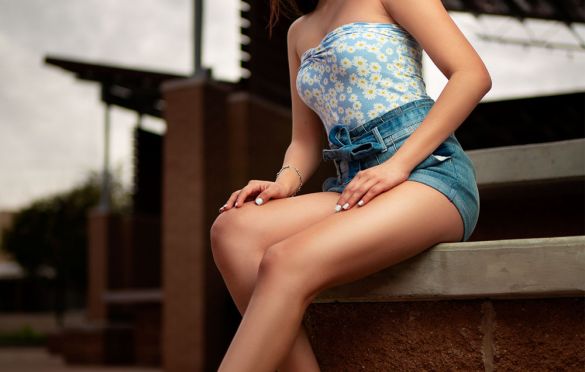 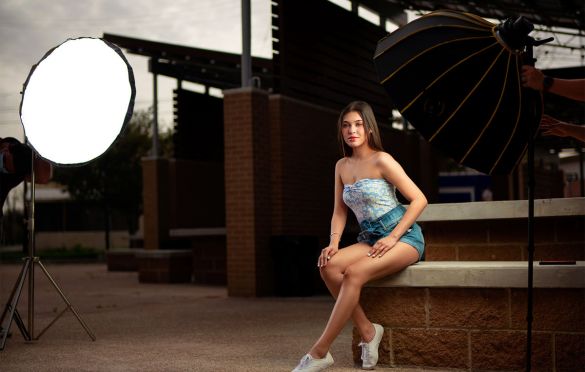 Sign Up For Sony's #BeAlpha Free Photography Event with Live Photoshoots, Q&A's, Classes, And A Chance To Win a Sony A1!