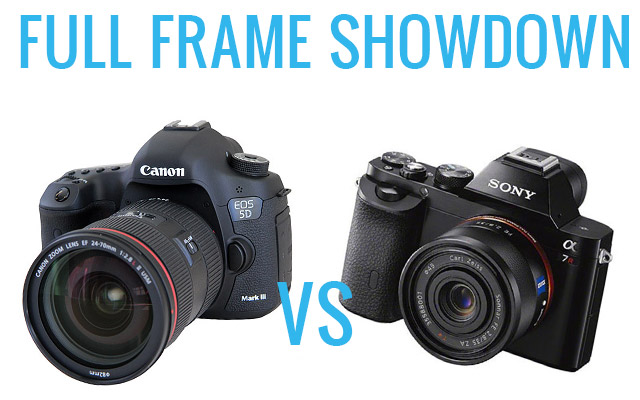 Ever since the Sony A7 was announced, people have wondered how it compares to the current crop of professional level DSLR cameras. The A7r has drawn comparisons to the Nikon D800 mostly, thanks to their similarly high megapixel count and lack of an AA filter. But how does the A7 compare, to say – the Canon 5D Mark III?

That is exactly the question that is answered in DigitalRev’s latest video, in which they compare the Canon 5D Mark III and Sony A7 hands on, side bye side. Let’s take a look and see how this first battle of full frame DSLR vs full frame mirrorless cameras plays out…

If you didn’t catch the drift, here’s the summary: While mirrorless cameras have come a long way, and the new full frame Sony A7 is indeed very good, when put up side by side with today’s professional DSLRs – in extreme situations (low lights, etc) – they are simply not up to par.

One bit from the video that really stood out to me was the performance of the A7 EVF in the low light of the garage. Simply put, it was absolutely dreadful. It is true that EVFs have come a long way, and are indeed a good rival to an OVF in daylight, but once you take them into situation other than ideal, they simply do not stack up.

I also tend to agree with the bit Kai said about buying the A7 now, you are stuck with it when mirrorless gets better later. Why not buy a Canon 5D Mark III now, since it clearly performs better in most situations?

What are your thoughts? Was the video a fair comparison of these two cameras? Share your comments below to join the discussion.