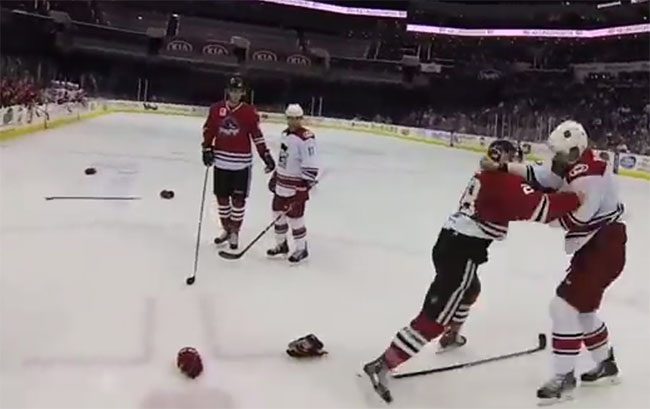 Are ‘Player Cams’ the Future of Sports Broadcasting?

Most of us follow at least one or two professional sports throughout each year. We watch on them on TV and play the video games to play as our favorite players on our favorite team. One view that we as spectators rarely, if ever, get to see is a true first person look at the game – from the player’s perspective.

Thanks to the magic of GoPro rigs we are now able to experience our favorite sport up close and personal. I recently came across two videos: one of MLS Soccer Star, Brad Davis and the other of a Referee in an AHL (American Hockey League) Game. In each video the individual was wearing a GoPro during game action – giving us a very unique view at what the players see and say during live action.

Check them out below:

Check out  minute 2:55 in the Hockey video for the referee’s view of a fight between 2 players.

Obviously, there are flaws. The soccer video, for example, is a bit jumpy due to the GoPro being mounted to his chest while he is running. But the view that you get is quite unique and the only other place you would find this is in a video game.

Having each player wearing a camera, which can then be selected for use on TV by the broadcasting network,  would be an interesting way to switch things up from the traditional TV sports coverage. Now, I think that would be really cool, if not impractical in some sports (I’m looking at you, NFL). If the stabilization issues could be worked out, I think it would make for some really awesome replays. Could you imagine watching the star running back from your favorite team while he breaks several tackles on his way to a touchdown, all from his vantage point? It has potential to say the least.

So, the question of the day is: As technology advances and cameras get smaller with higher quality, and improvements in stabilization are made, do you see this sort of view being added to the arsenal of major TV broadcasts of the sports that we love?