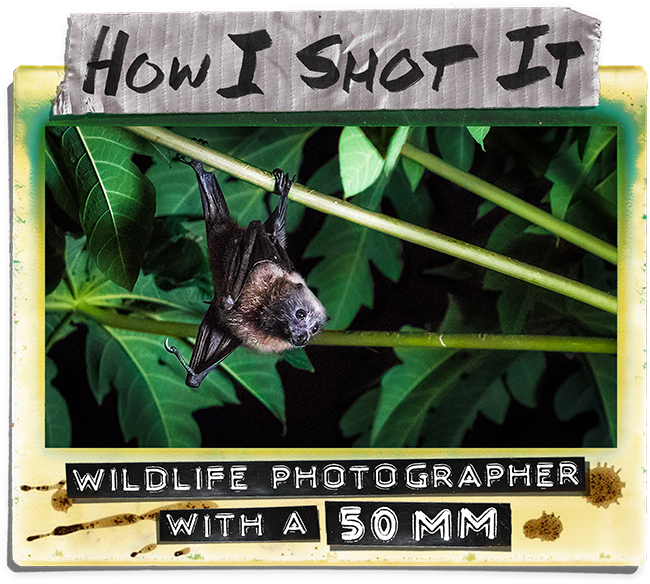 Perhaps you are poor. Perchance you are a cheapskate. Possibly you have no camera store close by. I am all 3. Photography, being a largely equipment based affair (an extortionately expensive one, too), often leaves the photographer with some form of obstacle between the camera in hand and the picture in mind.

Working on a story about Fruit Bats (A.K.A Flying-foxes), I boarded a plane back to my home country, the Islands of Fiji. With beliefs of shape-shifting deities, a centuries-old taste for this winged-delicacy and home of the rarest Flying-fox in the world, influence of the multifarious ‘beka’ [Local term for ‘bat’] is deeply rooted in Fijian culture. I was a wildlife photographer with nothing more than a nifty fifty and a $20 strobe (Yongnuo YN 460) in need of a way to capture a timid, nocturnal animal in the darkness of its treetop habitat.

[REWIND: WILDLIFE PHOTOGRAPHY: WHAT GEAR DO YOU REALLY NEED?]

You should have no trouble guessing from the name that Fruit Bats are unable to deny themselves the juicy taste of pawpaw. These particular bats roost in the bush and jungles, but flock to urban areas every night (often in the tens of thousands) to feed on the boundless amount of fruit trees that can be found growing from virtually every square meter of the land. Luckily for me, one of their favorite haunts happens to be a succulent fruit-bearing pawpaw tree that grows just a meter from the edge of my roof. Instead of going to them, I’m going to let them come to me with the help of a children’s camping tent.

Contrary to popular belief, Fruit Bats are not blind and have better eyesight than humans during the day and dogs at night – this is certain. However, even with an f/1.8 lens, some photons will need to be sprinkled on the scene to achieve illumination. As the tree-top I am photographing exists many meters above my head, I’m then going to give my flash the ability to fire off-camera using scavenged materials, some epoxy glue and little ingenuity.

(Please Note: This is not an electronics class, so a basic understanding of circuitry and proper usage of soldering irons, multimeters etc. including the ability to stick tape and read English is assumed.)

Aspiring to put as much distance between the camera and flash as possible, I reincarnated a 5 meter-long power cable from an old microwave I found discarded on the roadside. A power cable is ideal for this application because it generally consists of at least 2 internal wires – the minimum amount needed for camera/flash communication. Thus, the power cord from any other appliance will also serve this purpose well.

When an external flash is mounted atop a DSLR, there is no secret as to the close physical intimacy shared between the subsequent male and female ‘hot’ shoes. At the most rudimentary level, this is nothing more than a mount with 2 connections, positive and negative. When the shutter is clicked, a signal travels from the camera, through this link and then to the flash. A blinding white light ensues…

The 1st connection is through the isolated circular terminals in the center of both camera & flash mounts [Above: Red circles]. The 2nd connection travels via the metal housing of the camera mount AND the metal shoe of the flash [Above: Blue arrows]. The smaller circular terminals [Not marked] are used for TTL and other advanced flash features. Such trivialities…

The next step is entirely trial and error in terms of shape and materials used as every camera system is different.

I collect a random assortment of plastic/wood scraps lying around the workshop floor and jam them into my camera’s hot shoe mount one by one until I find one that fits more snug than the final square of a 1000-piece jigsaw puzzle.

An L-shaped part of a broken frame from an old disposable camera becomes the skeleton of the mount. I secure the microwave cable to this plastic chassis with electrical tape and strip its 2 comprising wires, positioning them in roughly the correct spots necessary for physical contact with their corresponding terminals on the camera.

The 2nd wire [Below: Left arrow & circle], simply needs to touch the metal housing of the camera’s hot shoe mount, so it can be positioned virtually anywhere – no problem. The 1st wire [Below: Right arrow], must protrude, ever so slightly, from the bottom/center of our DIY mount [Below: Right circle] in order to make contact with the aforementioned ‘circular terminal’ on the camera.

To accomplish this, the 1st wire is soldered to the head of a screw that sits within a loose fitting hole made in the bottom of the plastic. Much like the mechanics of a real hot shoe mount, I slip a spring on the shaft of the wire to provide a small degree of tensile force to ensure the crafty connection holds tight. 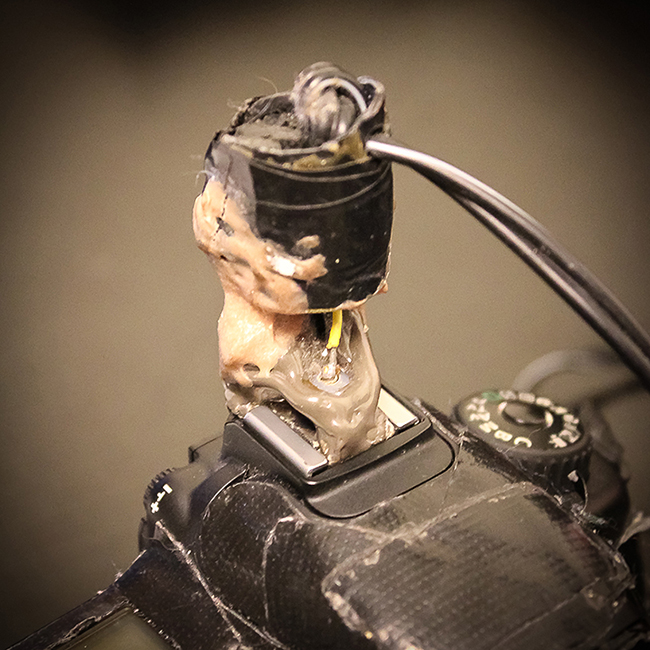 Vaguely resembling a poor rodent caught by a cat, eaten and regurgitated upon a pillow, behold my DIY off-camera flash cord mount. I know, it’s not beautiful, but nor is this a beauty pageant, so read on…

Prepare your scalpels and forceps; it’s time to dissect the flash:

Like coronary artery bypass surgery, we must circumvent the flash shoe, tap into the connection where the signal flows and replace it with our own: 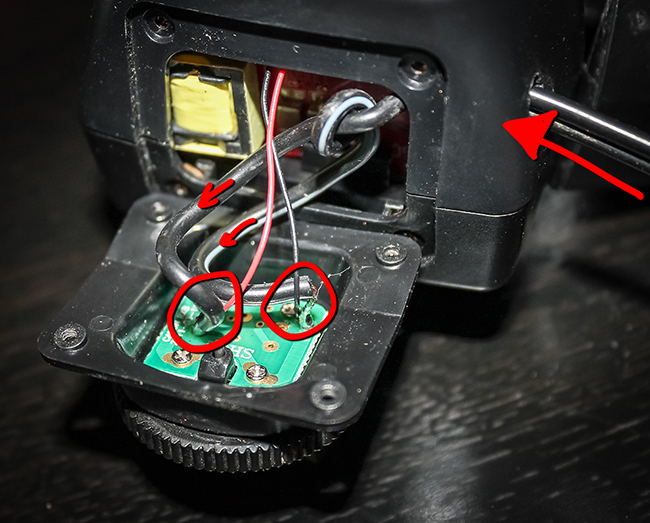 Removing four screws from the bottom of the flash, the panel holding the hot shoe mount falls off and we see just 2 thin wires [Above: One red & one black – Circled in red] connecting the shoe to its electronic guts. These petty strands of copper are the arteries responsible for carrying the electric signal to the flash-tube after it is first received from the camera. Using a knife, I bore a small hole through the plastic casing of the Yongnuo and feed the opposite end of the microwave cable into the flash [Above: Large red arrow]. The 2 stripped wires [Above: Small red arrows] are then soldered to their corresponding terminals on the circuit board [Above: Again, circled in red].

IMPORTANT! The wire leading from the center terminal of the camera hot shoe mount MUST connect with the wire leading from the the center terminal of the flash shoe. I’m sure Canon (and even Yongnuo to some extent) have worked out the polarity of their connections, but if time has come to take your DIY to an experimental level, strike the soldering iron while it’s hot.

With this hack, the flash fires exactly the same as if it was mounted directly to the camera, except I now have a 5 meter radius with which to position the light in any direction I want. Later on, I installed an RCA plug along the wire in order to detach this homemade extension at will and use the flash without a 5 meter power cord dangling on the ground behind me.

Given the inherent lack of zoom in a 50mm lens, intimate proximity was required in order to photograph the winged visitors. Flying-foxes are exceedingly apprehensive of their surroundings and will quickly fly off at the slightest hint of another animal’s presence.

Adopting the ‘hide’ technique used by many wildlife photographers, I concealed myself within the obscurity of a children’s camping tent and watch countless bats land on the branches of pawpaw trees, sample the nectarous fruits and take off into the darkness of the night once again.

Often misconstrued as spooky cave-dwelling creatures, Flying-foxes are actually 100% vegetarian mammals who roost in the tops of tropical trees. They rank among the main pollinators of Fiji’s fruits and flowers and are one of the world’s most ecologically important animals. Unfortunately, Flying-foxes are also considered a delicacy here. The organisational bodies responsible for their protection have a severe lack of statistics concerning population numbers, threats and even diets of these bats. The survival of Fiji’s most important animal now hangs upon the appetite of another. This project resulted in some of the best pictures taken of Fiji’s bats to date and spurred a genuine concern amongst the local population regarding their conversational status.

The finesse of a Michelangelo sculpture never relied upon the design of his hammer – It was his ability to pound the chisel. In a country with likely the least camera equipment available in the world, we have proved that the hunk of glass, metal and plastic in our paws is not just a ‘camera’, but rather a ‘tool’ subject to our manipulation. Blind to the reflection of yourself in the mirror as a ‘photographer’, you will become a force of creativity…
Tags #diy #wildlife #creativity #how I shot it #hack #bat #flying-fox #fiji #flash
Previous