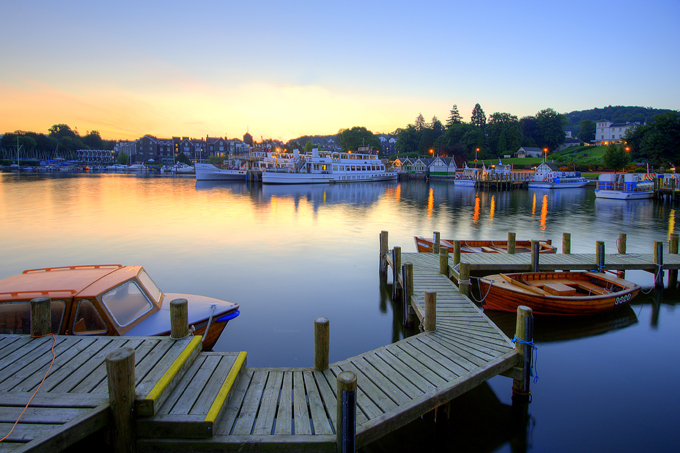 Diary of a Landscape photographer | Part 5

August has never been my favourite month, and this one proved just as frustrating as previous ones. Though it did have it’s compensations as I will now convey as best as I am able. The walk to “Rodneys Column  in Wales is a long and arduous uphill climb, after finally reaching the summit with all of my equipment; I spent 4 hours capturing average looking images amongst the grey cloud, spent another 30 minutes in pursuit of some very uncooperative sheep, and then got soaked to the skin on my descent. Suffice to say I won’t be showing any of the images, but I mention these things because it is all to easy to suppose that everything goes right every time, and if it may be just a crumb of comfort to anyone that thinks “Why me! , when they happen to have one of those days, believe me, we all do!

In total frustration at not taking a decent shot in a while, and with some haste and rash decision making, I announced to the long suffering wife “I’m off to the Lake District, don’t expect me back until tomorrow  She shook her head and the eyebrows went up in the usual “Your not right in the head  kind of expression, but she did offer “Would you like me to make you some sandwiches? , to which I willingly accepted. (Well no one likes eating their own sandwiches do they?)

Sandwiches flask, camera, spare battery, warm clothes ¦ ¦all sorted and packed into the van, I kissed the wife on the cheek, straightened my sunglasses and announced in my best Arnold Schwarzeneggar voice “I’ll be back  to which I received the same raised eyebrow expression. I didn’t have a definitive plan; I just wanted to explore territory I hadn’t visited before and maybe get a shot from Buttermere that had long eluded me. The journey was interesting but not very productive photographically and so I landed at Buttermere in the evening and hoped that the lake would be calm. The sun was dropping low and was illuminating a solitary tree in a very nice way, but the wind was still stirring the lake surface, I took the following shot anyway. 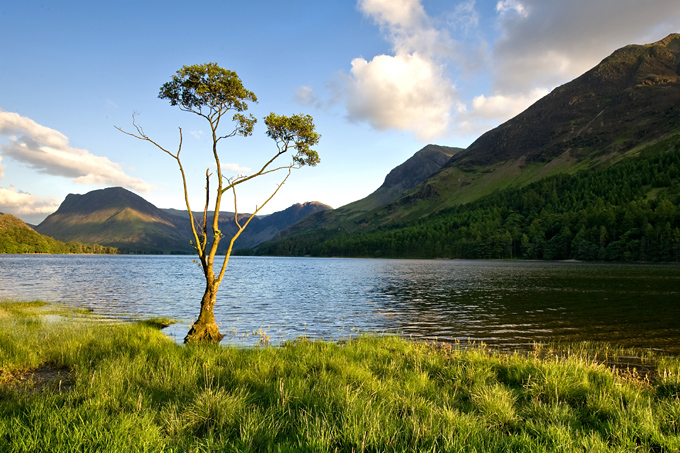 I walked round the lake, and took a few more shots, but that wind wasn’t subsiding and I headed back to the van in near darkness with the photo I wanted to take still eluding me. I headed out of Buttermere on the tiny winding unlit roads, foxes, badgers and other creatures of the night caught momentarily in the headlights went about their business, as I drove slowly into the mountains. I stopped the car on a suitable rocky wide area of road, and decided to try a few star trail images. The first thing I discovered was that even though I’d brought a torch (flashlight) it was only just bright enough to illuminate my immediate area, and so any chance of a decent composition was remote to say the least. I should have got to this spot while it was still light; composed the shot in the viewfinder took a shot with the mountain detail and then waited until dark to do the star trail. I could have then blended the images in photoshop to get a well defined and composed view with a dramatic star trail. I looked up at the sky and the star detail was incredible, there were millions of stars, and while I watched, comets and shooting stars flashed across the night sky like something from a sci-fi movie. I have posted the following image on here, not because I consider it to be a great shot, but more because it tells a story of an opportunity missed. The settings I used after a few experiments were ISO: 1000 753 seconds @ f5.6 WB Tungsten, Tripod.

“NIGHT MOVES  (Somewhere up a mountain in Cumbria) 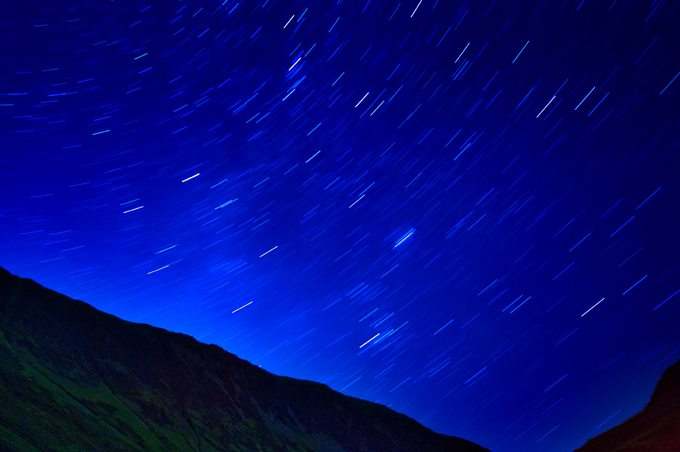 I decided to try getting a couple of hours sleep, but I was cold, the mountain air had been cool outside the van and now I struggled to get comfortable in the drivers seat, so after much tossing and turning, I decided to get in the back, I hadn’t packed a sleeping bag or a foam ground mat, and now silently cursed my rash decision to rush off without any thought or preparation. So now every ridge and bump in the back of the van I was feeling, added to this I am 6ft 2in tall and the back of the van is 5ft 10in at it’s longest length, after growling and shifting about for another 20 minutes I finally gave up the idea of sleep, and got back in the driving seat. I headed off to Lake Windermere and a new dawn. Yawning and tired I arrived to find Lake Windermere and the surrounding village silent in the dawn light.

After a few more shots I made the 3 hour journey home, to my nice comfy bed and sleep ahhhh heaven!