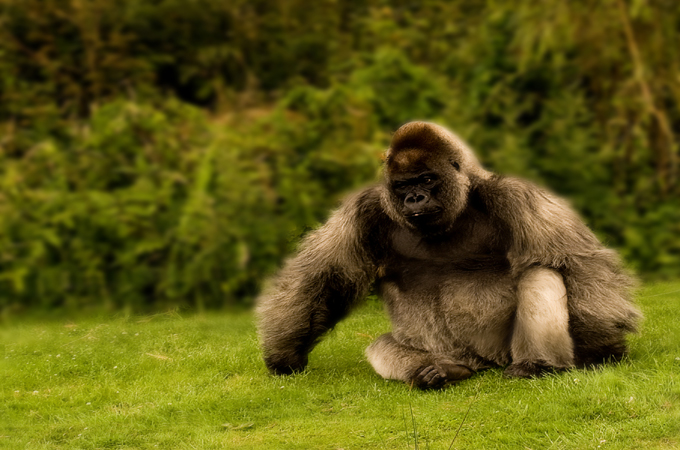 Diary of a Landscape photographer | Part 3

Longleat is a fascinating experience, the combination of the old mansion house and the safari Park is well worth a visit. My wife being a great animal lover, always wanted to go there, and as a birthday treat I organised the visit. As luck would have it, the farmhouse that I randomly chose from a photo on the internet just happened to be about as close to the park as you could get. Clean and tidy with good food and two friendly cats, well what more could we want!

The safari trip was excellent, it was a great atmosphere and looking at rhino’s giraffes and even hippo’s in a very natural looking environment was very pleasing to the eye.

I don’t like the idea of animals in captivity but when I consider the kinds of dangers that exist in their natural habitats, (mostly from mankind invading their space) then I suppose this is going to be the only way some species will survive in the future.

Now for the Gorilla story.

Nico, the Western Lowland Silverback Gorilla is aged 50 years in Human terms, in Gorilla terms this equates to 100 years old. (The oldest on record in captivity lived to be 57 human years old) Nico lives in his own house on a small island on the Longleat estate and enjoys watching TV (The keepers informed us that he has just been upgraded to SKY HD and yes, indeed when we seen his house, we could see the satellite dish outside) Apparently they have to curtail his viewing time, as they don’t want him turning into a couch potato.

The tour guide explained “The only chance you get to see Nico is to take a trip on the boat, this way you might just get a glimpse of him  Now my wife, having watched BBC TV series about Longleat, knew all about this, and the fact that sadly Nico’s life long partner had sadly died some years previously. So she was really looking forward to getting a look at Nico close up. I said to her “You haven’t got much chance off seeing him, he’s probably in bed sleeping off a Banana liqueur session, or watching The Muppet Show or Planet Of The Apes on TV  but she wasn’t deterred and we duly queued up for the boat trip.

On board the boat at last, we passed the Hippo’s (that looked for all the world like small grey islands with eyes), and slowly approached Nico’s island, the pilot cut the engines and we drifted silently towards the island “Shhhh be quiet  said the tour guide, “he’s just behind that bush , you can just see him  everyone peered at the bush, and suddenly it exploded as Nico come charging out, now I have to say, for a creature that is supposed to be 100 years old in real terms, it sure could move fast! The speed and power of this magnificent animal was just magical to witness. After hastily snapping a few blurry shots with my camera, I managed to get one as he sat down and just stared at me with such soulful eyes ¦ ¦ ¦well suffice to say it was a moving moment.

I said to the wife afterwards “Did you see the speed of him? Maybe I should change my diet and start eating more greens and banana’s  to which she muttered something about moving me to an island with Sky TV. Humph!

Not really a Landscape shot I know, but it’s still nature after all.

Just a few word regarding this image, I cheated ¦.well, manipulated this photograph to some degree. The blurred background was created from the “Filters  menu in photoshop. I created a layer then blurred the whole image using the said tool in the filters menu. I then used the eraser to reveal the sharp image beneath of Nico. The other bit of manipulation was the removal of an unsightly line that was in fact the barrier used to keep Nico on his island, I simply used the clone tool to make this disappear.

Liverpool is one of the few cities that can boast two cathedrals, The Liverpool Anglican cathedral professes to be the largest Christian Cathedral in the world

(Though this title is often contested by The Cathedral of St John The Divine in New York) The foundation stone was laid for the building of the Liverpool Anglican Cathedral in 1904 and the first part of the work (The Lady Chapel) was completed in 1910.

This, “The Lady Chapel  is the oldest part of the building and is indeed my favorite part of this huge building, it’s a brilliant place to visit, the people are so friendly and all you have to do is ask, and they will allow you to wander around freely taking photographs as much as you like. (Outside Service times of course) This HDR is a sample of the great architecture that exists inside. Unfortunately light conditions were such that outside shots looked awful, but that’s one for another visit another day. 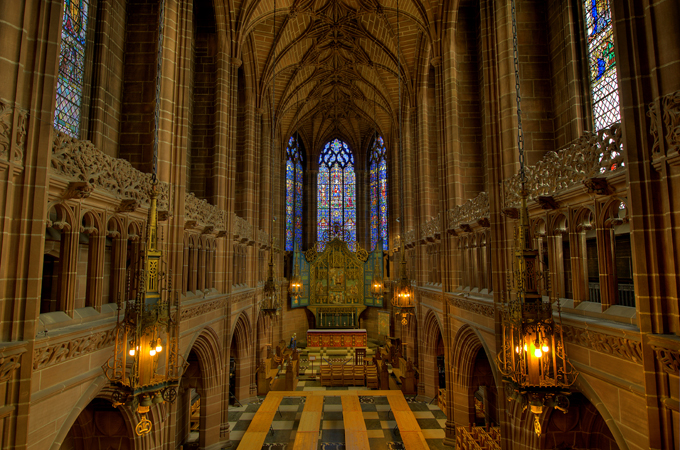