Diary of a Landscape Photographer | Part 2

We had been experiencing some really nice weather, and I thought I might try a few sunset shots at Talacre beach not too far away. Although sunsets have been photographed every which way you can think of, I still look at every one and marvel at their splendour and feast of colour that nature provides. I set off in good time (so I thought) but it wasn’t long before I ran into my first set of road works and temporary traffic lights, by the time I was stopped for a fourth time by more of the same, I was getting a touch miffed! Growling and hissing at no one in particular I dodged speed camera’s as I raced like someone possessed towards Talacre and a rapidly sinking sun.

Getting out of the car grabbing my gear and racing over the sand dunes, I was just in time to get a few shots before the light was gone. As is often the case, the last photo I took that evening as I walked back to the car, was the one I liked best , the pronounced ripples in the sand gave some nice foreground textures (the little whites bits are shells) and the light show was beautiful. Although I mentioned above that every sunset is potentially beautiful, I always find that a second or third point of interest to compliment it is a good recipe for success, in this case, the rippled sand and the lighthouse. 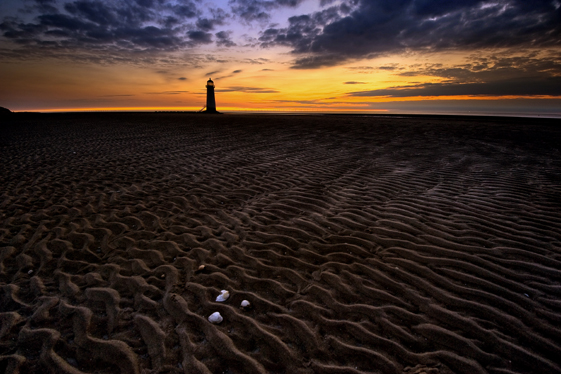 This venue is perhaps not the most obvious of locations for a landscape photographer, but with little or no wind, some nice reflections and touches of last light colour, maybe I would get something worth looking at. I tried shooting the old dock building that had been converted into very plush block of flats, but the longest lens in my kit bag (a Nikkor 50mm F1.4 prime lens) just wasn’t long enough to get the composition I wanted, so observing the gathering colour in the sky I turned my attention to the other side of the dock, this is where the business end now operates from, and the dockside cranes seemed to be a good focal point. The moon making a guest appearance was a bonus too. This following image may just inspire you to think of a location in your area worthy of a second look.

We had decided to visit Landwynne Island, one of my favourite locations, in order to try some Star Trail experiments, the weather forecast had predicted clear sky’s, the weather was warm, and so we (Myself, Gary & Paul) all set off on Saturday evening to arrive in Anglesey at about 8.20pm, (via a dodgy kebab take away meal en route and accompanied by chronic indigestion) allowing us enough time to get a few shots before dark and still give us enough time to establish good vantage points for our start trail shots.
(Just a word of caution, it is worth noting that when considering nocturnal or late evening ventures out with your expensive camera equipment, it is probably advisable to travel in a group or at least with a companion. I don’t want to alarm anyone unduly, as I travel extensively alone and have never had cause for concern, but even I wouldn’t have lingered at the Birkenhead docks location alone.)
We noticed with dismay a large cloud bank gathering on the horizon as we emerged from the walk along the path through the pine trees onto the beach. Convinced that the cloud would disperse we carried on towards the lighthouse at the far end of the Island. I took a few shots of the ponies that roam free on the island, but none that were spectacular; I then spotted some small yellow wild flowers that I thought would make a good foreground to the lighthouse and composed a shot of that. 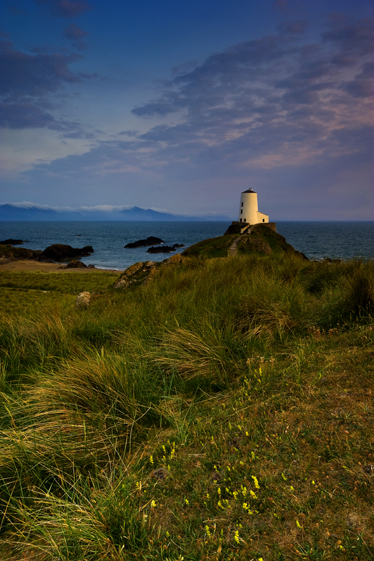 After wandering round for a few more hours it became ever more apparent that the weather forecast had got it wrong yet again! The skies were now full of cloud and barely a star could be seen, muttering curses and proclaiming British weather forecasters as the worst liars in the world, we set off back to the car. After travelling back to the first beach we discovered just why Landwynne Island was indeed called an Island, having walked onto it on numerous occasions, it never occurred to me that it would ever be surrounded by water, but at 11.30pm that particular evening we found ourselves cut off from the mainland by about a 30 meter expanse of sea, it just wasn’t our night!

We settled down to chat about past photographic experiences and after another 90 minutes the tide had receded enough for us to attempt to walk through the last of the water, of course my left foot was the one that found the deep hole in the sand and consequently soaked my foot. The strange squidgy noise my left trainer made now echoed as we made way along the path through the pines. Several toads seemed to appear in our torchlight, and they hopped and jumped on the path in front of us, strangely increasing in number as we walked along. Both Gary and Paul suggested it was my squeaky trainer that was attracting them, Hmmm yeah right very funny!

I got home at about 2.00am and decided to download the images I had managed to get, onto my PC. As usual I made a new file in readiness, then placed the flash card in the card reader, and opened the file to browse the images, having looked through them; I removed the flash card, placed it back in the camera, and formatted the card read for my next trip. Then I opened the file I had created to have another look at the images. I blinked in incredulity at the blank file and it hit me all at once like a hammer! I had forgotten to transfer the images from the card to the new file! After some cursing and swearing along with a few self derogatory comments aimed at myself I resigned myself to the fact that the images were lost forever. I spoke to Gary the next day and told him about my gargantuan error. After some rather flippant and unnecessary remarks about my age and mental health state he decided to be helpful and asked “have you tried using that Sandisk Extreme Rescue PRO software that we got free when we bought the memory cards ?

I had forgotten all about it, but replied “No I haven’t but it’s got to be worth a try  Returning home that evening I went through the software download routine and put all the appropriate codes into the right places, then clicked on the memory card and waited while the programme scanned it for lost images. At this point I wasn’t really expecting very much in the way of results. After what seemed like an age, but was in reality about 20 minutes, to my utter astonishment, this programme had found every single image that had been saved on the flash card. What an incredible result!! Ok I have only had the flash card for about 2 months but there were hundreds of images found. If you haven’t found anything worth knowing in the rest of my ramblings, but didn’t know about this bit of software, then you haven’t wasted your time. This little bit of software can be an absolute life saver. I am told it even works on old or partially damaged memory cards where the images have been lost or deleted. A great big Thank You! to Sandisk and not forgetting Gary who actually remembered about the software, well one of us has to have a decent memory! (wouldn’t it be great if we had a slot in the back of our skulls where we could upgrade our own memory, by just putting another card in)

Thank you all for reading the above. If you have any questions thoughts, suggestions or feedback, please feel free to comment or contact me through my web site.