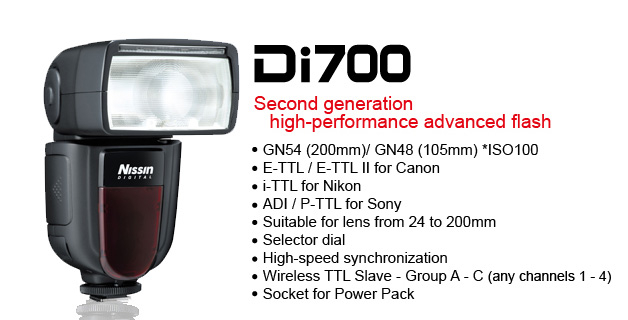 Canon’s RT system, Yongnuo’s latest YN Series Speedlights, and many other speedlight systems are finally making the jump into wireless TTL control. Nissin is one of my favorite third-party flash manufacturers, and the latest info indicates they will also join the radio TTL market.

According to a new page on their website for an updated version of their Di700 speedlight, called the Di700 Air, the new flash will support Canon, Nikon and Sony TTL systems. This is in addition to its new built in 3 group, 4 channel wireless radio triggering system. Otherwise, the unit seems to be very much the same as the previous Di700, not that I am complaining – these are some pretty big feature additions.

In addition to the Di700, Nissin will be launching a commander unit for your camera called the Air Commander. This will work just like any other radio triggering hotshoe adapter, sitting on top of your camera and triggering your speedlights via 2.4GHZ radio waves – manually or via wireless TTL.

For more information, you can check out the Nissin Di700 Air page over on Nissin’s website.

Wacom Releases The Most Powerful (& Beautiful) Stationary & Mobile Models Yet