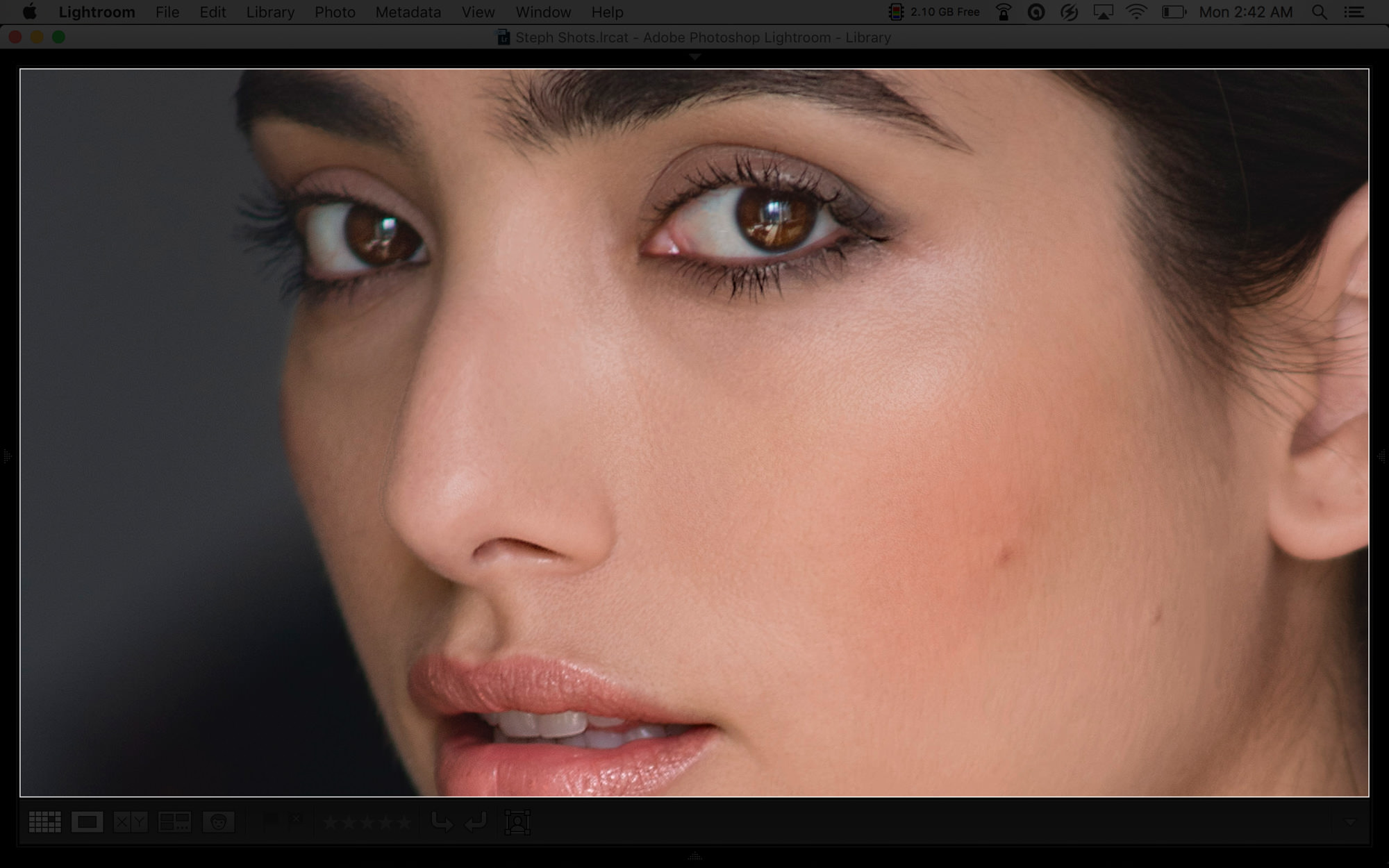 It’s interesting how, in life, some of the best moments, the most eagerly anticipated moments, are followed so quickly by a little bit of a downer, or a little bit of dread. In photography, that moment for many is the moment you return from a shoot, and you’re about to see the fruits of your artisanal labor – bringing up the images on-screen that you just shot.

It’s exciting because, during the shoot and prior to, you’re full of ideas – during, you execute them, and then now you’re about to see them realized. But as the flood of norepinephrine and dopamine intoxicates you, you realize that the most time consuming and often gut-wrenching part of the endeavor is about to take place – the cull. 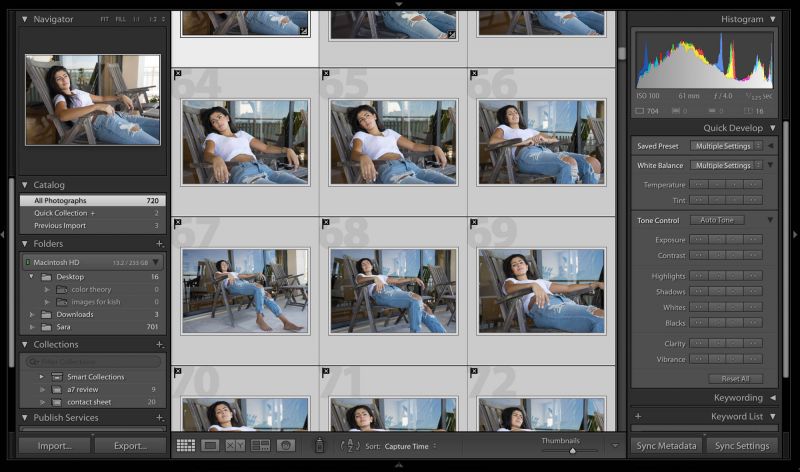 Regardless of your level of experience, it is absolutely critical that you learn how to think about culling and how to actually use your program of choice to make culling more effective. It is a daunting task, and emotionally involved because it means you’ll part ways with some of your shots, but it is oh-so necessary. If you ever struggle with why you should, even if you have unlimited storage, think in terms of time, and think in terms of your client. In fact, in almost every part of your shoot, it pays to take a step back and run it through your own neurology as if you were the client.

A Few Words On How To Think About Culling

If you do that, you’ll understand that you, the client, have hired a photographer to shoot and edit, and part of editing means you want to be shown the best. You are paying for a service which doesn’t mean you want to be shown all the work on the back-end. No, you are paying for the decision-making ability (to some degree) of the photographer/studio. A client wants just enough as not to be overwhelmed, and enough that they feel they actually have options to choose between. 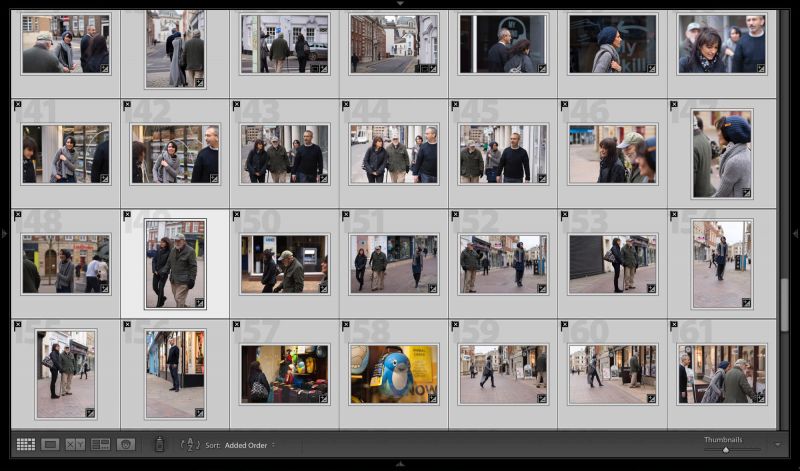 One of the ways to help you strike that balance is to think before the shoot, and during culling, about reaching a 60/40 ratio of what you know the client likes, and what you like. Of course, you can change that ratio as you see fit, but it helps, because as stated above, you’re being hired for your vision and ability, so they want to see your creativity and tastes too. If you shoot and cull just for clients, you’ll lose your drive, but if you do it just for yourself,  prepare to lose clients.

I’ve previously spoken about the benefits of a first & fast flyby – meaning go into the set of images, say in Lightroom, and scan them all at blazing speeds. I mean barely a second an image. What you’re doing at this stage is looking for glaring issues that would render that image useless, and believe me, they’ll stand out at that speed. What we’re talking about are things like truly blurry or out of focus images, poor framing, wrong light, eyes in mid-blink, and poor backgrounds. But it also gives you a quick recap of the entire shoot, reminding you of all what’s there. 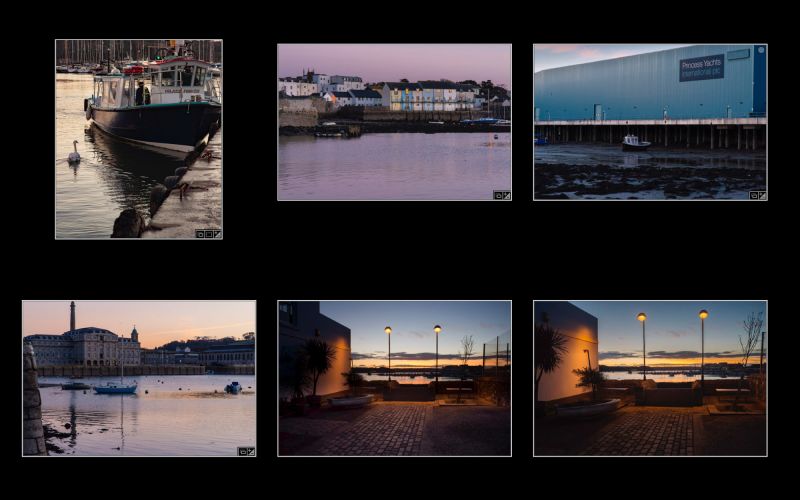 The added benefit to this, too, is that the next time you go through, you can do it a little less quickly, and it’ll seem much slower, much like how driving at 40 seems like you’re hardly moving after getting off the highway.

Once you’ve done that, you can move on to the more detailed review, and Lightroom really comes into its own at this stage. Here are a few pieces of advice on how to use Lightroom to assist you in decluttering and culling.

There are two basic ways to approach this, but, generally speaking, it involves going through each image and giving it a rating, after which you’ll use the LR filter to only show a certain selection. Some, or probably most, will start from the top and flag the picks as they go by hitting ‘P’, and this is fine and can be done in Loupe or Grid views. However, it may benefit you to do it a little differently, and that is by setting all the images as rejected, and then going through and hitting ‘P’ for the picks.

When you do it this way, it makes for some easier sorting at the end, and it changes how the images are actually seen in Grid view. If you do this, and you go through and make your picks in the Grid view, the images will be clear, and the rest will be faded. It just helps to draw your attention to where it matters. Of course, the filtering comes into play here as well. Generally speaking, from any given shoot, there are going to be fewer keepers than there will be ones to toss, so keep that in mind. 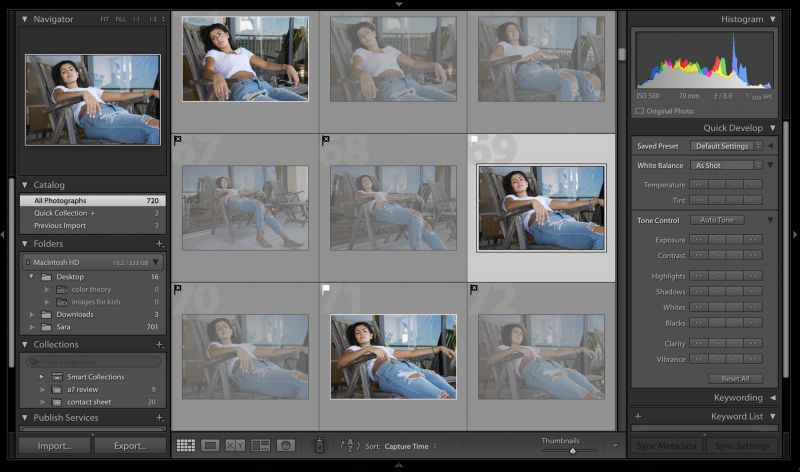 I do find it helpful to take advantage of Lightroom’s ability to remove screen clutter and distraction by hitting ‘L,’ which gives you different levels of background fading. You can fade the background or make it essentially vanish by turning into black, giving you a clean view of your images. You can see what I mean below, and while in here you can use the ‘+’ or ‘–‘ signs to change the size of the thumbnails.

At this point, it has surely crossed your mind that you’d likely want to see some of these images zoomed in at 100% to check for sharpness and so forth, and the idea of double clicking for maybe a thousand photos sounds horrid. What’s nice about Lightroom is that there’s no need to double click. You can simply use the ‘Z’ button. 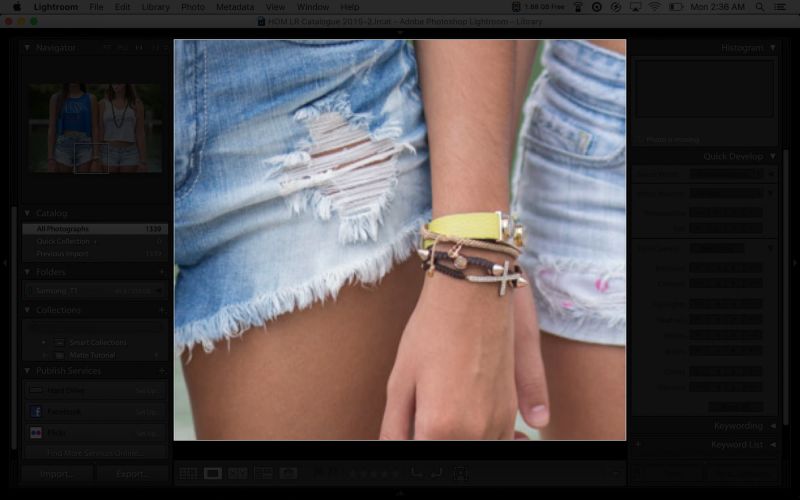 Regardless of your view, you can hit the Z button, and it will zoom in the image you’ve currently selected to 100%, and you can scroll around on it quickly. To go back, you’d just hit the Z again. However, you may have noticed that Instagram has this feature where if you are in grid view of someone’s Instagram page, you can press and hold on an image, and it will pop up to fill the screen, and when you let go, you’re back at grid view. The same functionality is in LR with the Z button – just hold it and scroll around at 100%, and then let go when you’re done to move on. 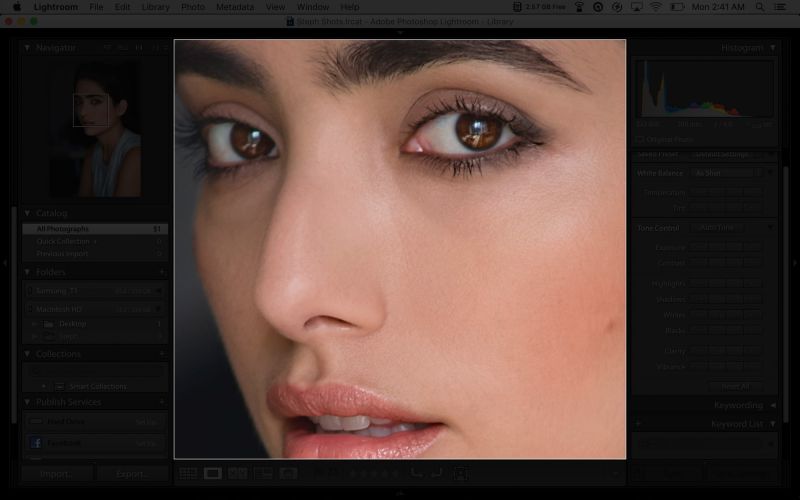 Speaking of moving on, it helps to employ the Auto Advance feature in LR which simply means as you make a flagging or rating decision on an image, LR will automatically move on to the next photo, saving you a step. Turning the feature on can be as simple as ensuring Caps Lock is on, OR going to Photo>Auto Advance. 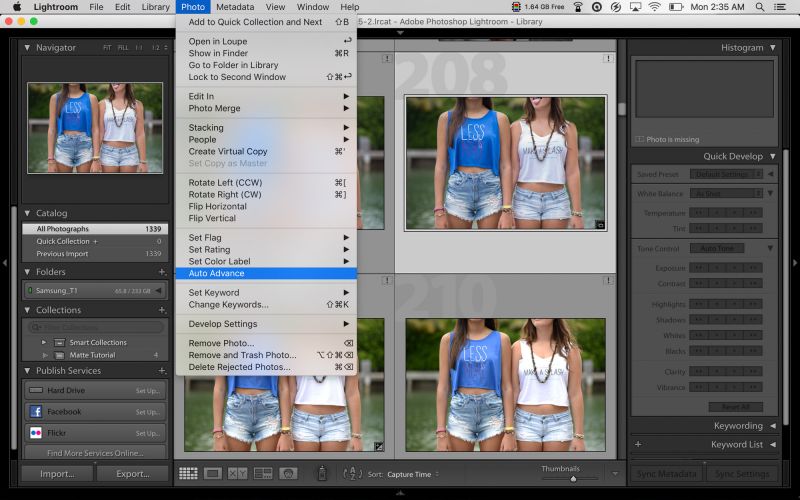 I hope this has provided some insight into the value of culling, and Lightroom as a tool to do it. It’s the kind of topic that doesn’t get enough coverage, since it’s not as sexy as vintage film presets, or frequency separation, but absolutely critical. It’s the tip of the iceberg of what you’ll learn in the Lightroom Workflow Collection – it’s the only thing I recommend, and worth a look.