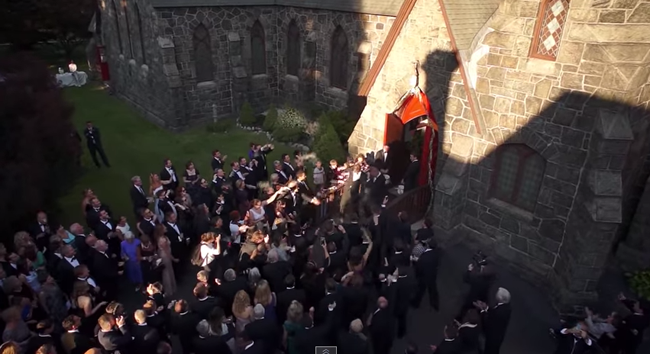 For some people, apparently, the rules don’t apply. Not if you oversee the commitee of the organization who makes such rules.

Last month, Rep. Sean Patrick Maloney married his long time partner Randy Florke in Cold Spring, N.Y. The celebrity-filled wedding was replete with multiple extravagances, such as a fireworks show and a drone-shot wedding video. And now the congressman is under fire, on one front due to the over-the-top ostentatiousness of the event and the other, because the Federal Aviation Administration, a department that Maloney oversees on the House Transportation and Infrastructure Aviation Subcommittee, has prohibited the use of commercial drones.

The Hudson Valley Democrat hired Propellerheads Aerial Photography, to shoot the video and paid the owner, Parker Gyokeres, making it “for commercial use.” Gyokeres, an active duty U.S. Air Force Photojournalist, tells The Blaze, “This is a technological revolution. We are the only industry I know that is begging for government regulation. In lieu of formal laws governing the use of my small remote control hexacopter, commercial or not, I am operating my business safely and in full compliance with the voluntary guidance found here.”

[REWIND: VIDEO: THE MANY WAYS A ‘PHOTOGRAPHER’ CAN RUIN A WEDDING]

A source for the New York Daily News ascertains that Maloney and Gyokeres discussed the “murky legality of drone use and lack of clear federal policy.”  Maloney also mentioned that he sits on the subcommittee overseeing the FAA, but according to the source, “didn’t want to discuss policy on his wedding day.”

Under their hobbyist guidelines, which you can read here, the FAA allows the use of aerial drones if you’re “having fun” and “flying safely,” but prohibits it if someone is paid to do so. The laws are fuzzy at best and until the FAA can figure out how to regulate both commercial and private drone use, the rest of us will have to do as they say and not as they do, I guess.

What do you think? Should drones be regulated and how should the laws distinguish between a hobbyist vs a small business drone pilot?

3 Ways I Make My EOS M Work Better For Me