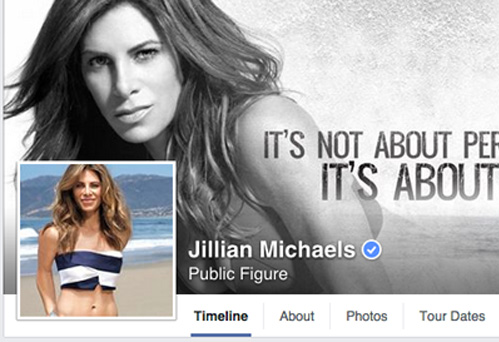 What To Do When A Celebrity Uses Your Image Without Permission

Copyright Infringement Is All Too Common

Copyright infringement. It happens every day and with the age of the Pinterest, Instagram, and all other social media, sharing an image that is not properly sourced or used without permission is far too common. What happens, though, if a high profile public figure uses your image and shares it with her 2.5 million fans on the internet?

[REWIND: COPYRIGHT REGISTRATION: HOW TO COPYRIGHT YOUR PHOTOGRAPHS]

This is the situation that Stephey Baker found herself in. Her beautiful image of a butterfly lifting a stone was sent to celebrity trainer Jillian Michaels by a fan. Jillian apparently reposted it onto her page. The image originally had Stephey’s watermark and copyright information on it, but was long gone, possibly in the posting and re-posting of the image as it passed through the vast sea of Internet clicks.

Until, out of nowhere it seemed, she began getting hostile messages and emails, bashing her and her photography. Upon further investigation, Stephey found this posted on Jillian’s Facebook page:

Out of the almost 5,000 comments on this thread, a majority of them followed the tone of Jillian’s initial post. The fans predictably stood up for Jillian, and immediately began name-calling and rude remarks, criticizing Stephy for “demanding” an apology. Comments such as:

How Should A Photographer Respond When Their Work Is Being Used Without Attribution?

As photographers, we understand attribution. We understand, somewhat, the laws of copyright and image rights and usage. Whether an image is used innocently, or stolen maliciously, the original image creators have the burden of trying to make a living in the midst of our work being freely shared, and the general public not understanding what the “big deal” is. A quick glance through the comment thread is proof of people’s lack of knowledge of image sharing/copyright laws.

A handful of people, mainly photographers, did chime in defense of Stephey on the thread. Many were quickly dismissed, but in one case, Jillian responded, showing that she too, has little understanding of proper attribution for a photographer. 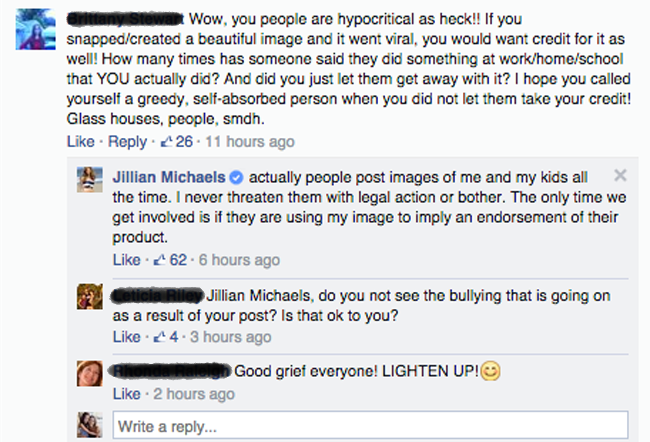 Stephey later commented in the thread. She did not jump in on the melee, but simply said her piece. 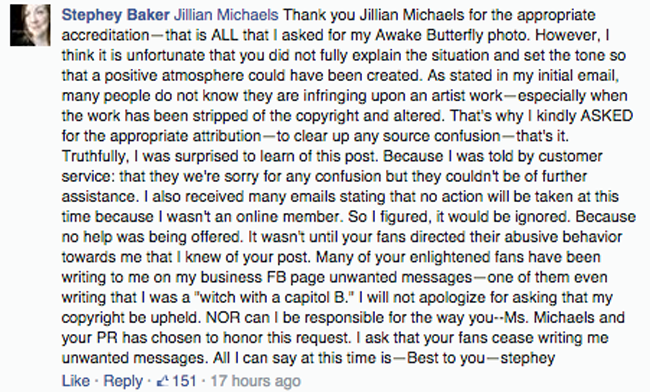 **At the time of writing, an email requesting a comment from Jillian Michaels’ team, had not been answered.

If you can’t say something nice, don’t say anything at all…as the old adage goes. Yet, it doesn’t seem to apply to our online behavior. It is easier and easier to hide behind a keyboard these days. Every day we see comments from “trolls,” loudly voicing their opinions, disrespectfully, with malice and hostility, and not a thought to the fact that there is a “real” person on the other side. Most of these people would not actually say their negative and hateful remarks to someone’s face, but with the ease and anonymity of the Internet, some people feel like they have free reign.

On a daily basis, I see remarks on forums bashing photographers and their work, and moderators coming in to warn members about criticism. Pye, our Editor-In-Chief has written a poignant article on HOW HATERS ARE DESTROYING THE PHOTOGRAPHY INDUSTRY, but sadly, this goes way beyond the photographic industry.

Stephey chose to address the onslaught of hostility politely, gracefully and not join in on the negativity or add fuel to the fire. In this specific case, the infringer just so happened to be a celebrity with a very large platform to voice her opinion. But the process of how to handle copyright infringement is the same…

So, What Should You Do If You Find Your Work Used Without Permission?

1. First, make sure you are educated in your rights and how to protect yourself against copyright infringement. Check out these articles to get you started.

2. Make sure the image is indeed yours and save an image of it (screen shot) for proof.

3. Contact the person who used your image and inform them that your image is being used without permission. Be polite and mindful that perhaps it was in error that your image was used. In other words, give them at least ONE chance to play nice and be polite. This can do a lot more to encourage them to comply, compared to your very first contact being a horrible, nasty one.

4. Depending on the circumstances, you may consider filing a copyright infringement lawsuit, especially if the infringer is using your work commercially.

Unfortunately, This situation is something we as photographers run into on a daily basis. As a photographer, it is not a matter of if your work will be used without your permission, but when. Taking steps to protect yourself and your work is about the best you can do, and when it happens, try taking the high road, as Stephey did.

I shrug it off as a fluke moment and momentary lapse of consciousness on the infringer’s part.

This is a good reminder for the rest of us to remember to watermark your images, and add the copyright information in the Exif Data. A watermark can be easily removed, but it may deter some from using your work without proper credit given.

If you were in Stephey’s shoes, what would you have done in this situation? Was Jillian Michael’s out of line with her Facebook post?  How do you protect your images? Leave your thoughts in the comment below.

Your Story Is Just As Important As Great Images | Jeremy Cowart