SLR Lounge > Camera Reviews and News > Canon G7x vs Sony Rx100 M3, Who Is the King of Compacts? 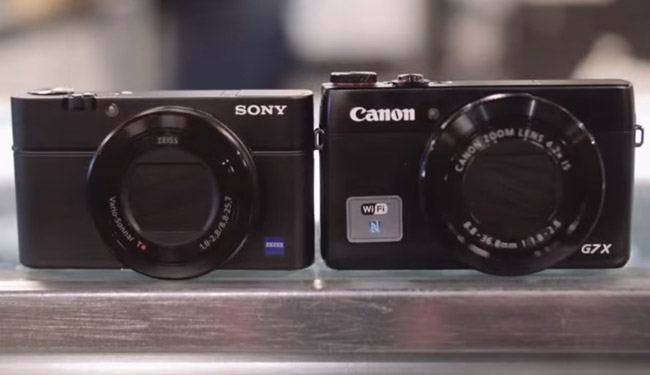 Canon turned some heads with the announcement of their new G7X a few weeks back at Photokina. The new high-end compact camera was clearly designed to be a competitor to Sony’s RX100 series. So, how does the new Canon compact hold up to the latest RX100 model?

Chris Nicholls and Jordan Drake and the rest of the team over at The Camera Store TV just put together a great shootout video directly comparing the two high end compacts head-to-head. If you are interested in Canon’s new offering and how it compares in equal conditions against an RX100 M3, then this is a video for you.

My only critique of the video is the time of day which they chose to test these two cameras out. Normally, these guys go out in the middle of the day and lighting conditions are not an issue, but today (while showing off the incredible abilities of the Sony A7s), they tested out two compact cameras in extremely low light conditions.

I would personally like to see a follow up video comparing these two cameras in normal lighting conditions, and see if the Canon still lags behind the Sony as much as it did in this extreme lighting. But that is just me…

How To Use The Amazing Patch Tool In Photoshop | Aaron Nace