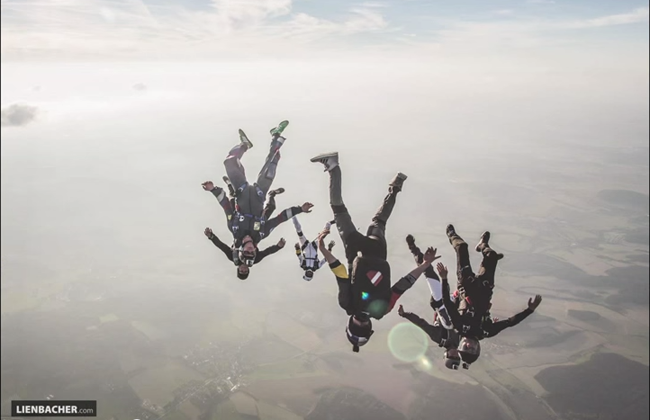 One of the most anticipated cameras of the last few months has been Canon’s update to the 7D. The 7D Mark II began shipping last week, and we were able to snag one from B&H Photo while at PhotoPlus Expo.

**Anthony has one in hand and has been testing it out. Check out this post for his initial thoughts.**

Before the camera was actually released, a few pre-production copies were passed out to Canon Ambassadors to work with and test. Christian Anderl, a photographer from Austria, received one of these pre-production copies and wanted to put the autofocus in the video mode to the test. And what better way than to throw it out of an airplane?

Instead of a long post about all the technical aspects of the 7D Mark II, Anderl wanted to see the 65 autofocus points (cross type), autofocus in video and 10fps in action. Not a fan of putting his camera in “auto,” especially in video, Anderl figured he could get behind autofocus if it worked, and worked well. So, he sought out his friend and fellow photographer, Wolfgang Lienbacher, and the Red Bull Skydive Team in Salzburg to see how well the autofocus worked when strapped to Lienbacher’s head, while falling 200km an hour.

If this Autofocus works while you´re jumping out of a plane with it, chances are high it will work everywhere.

Two things that Anderl pointed out in his blog post to keep in mind while you watch the video: first, the camera he received was a pre-production copy, so the picture quality wasn’t guaranteed to be as good as the copies being shipped out right now; and secondly, the team did not have a chance to activate the focus point in this video. Given these two caveats and the fact that the camera was attached to Lienbacher’s head while he jumped out of an airplane, the following video is quite impressive.

If you’re sold, then hop on over to B&H Photo and grab your own copy for your next skydiving adventure! And check out more of Christian Anderl’s work over on his website.

What do you think? Does the autofocus from the Canon 7D Mark II (falling from an airplane) impress you? Let me know in the comments below!