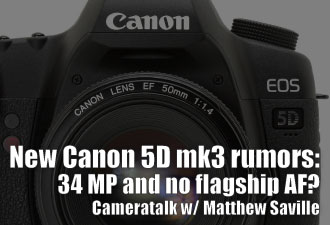 After the wave of crazy Nikon D800 rumors, we finally have a few more rumors about the Canon 5D mk3!

According to sources at www.CanonRumors.com and many rumblings from around the internet, there are twopossible cameras on the horizon.As I mentioned in my previous post about Canon 2012 predictions, I think we will acutally see BOTH types of cameras coming from Canon, so in theory both rumors could be 100% true.

The newest rumors aren’t looking very hopeful for us wedding photojournalists, however. According to some sources, the next camera is a high-res 5D mk3, which means probably an announcement some time early next year, with availability / shipping 1-3 months later.This camera will be 32-34 megapixels, it will have Digic 5 and great low light performance, HOWEVER unfortunately at least one source is saying that the camera will likely have AF performance no better than the 7D;probably somewhere in between the 5D Mk2’s 9-point system (where only the center point is cross-type), and the 7D’s 19 (all awesome) cross-type AF points.SO maybe the 5D mk3 will get 9 cross-type AF points, like the the 50D / 60D?Kind of a slap in the face, if you ask me, but also remember that Canon’s 5-seres usually has some “invisible” assist points around the center point that DO help out a lot….Lastly, it will stay at 3-4 FPS, like the 5D mk2 and 5D “classic” have been.

SO, as you can see, the 45-point flagship AF module would be the best option, but at this point there’s a 50-75% chance that WON’T happen.At least, not in the 5D mk3.Remember, there’s still the mytical 5DX to hope for!

One problem I see is that many Canon users have just resigned themselves to this.All the time I hear people saying “oh, Canon would NEVER put 1-series autofocus in a $3000 5-series body!”…Um, well, I guess Nikon didn’t get that memo when they were designing the D700 and D300, did they?I don’t mean to rub it in, I just want to STRONGLY ENCOURAGE Canon users to start demanding and expecting better from Canon.Especially now that the 1DX is out with a totally new AF system for flagship cameras, why NOT put the “old” 45-point AF into a 5-series?Yes, Canon would be wise to wait ~12 months after the 1DX release, I understand that they need to make a profit on their flagships.But eventually, we MUST see a “5DX” from Canon, something more than just a 5D mk2 with extra megapixels.

So my point is, DON’T PANIC JUST YET, Canon users!Even if this high-res 5D mk3 is next from Canon, it is still HIGHLY LIKELY to be just the first of two new affordable full-frame bodies.Within a year of next March, I’m still hoping that we’ll see an affordable version of the 1DX.

According to another photographer, Canon has recently made the statement:

“While we hear the voices, we want to see what the actual sales numbers will be for the 1D X and so determine how many 10,000s of customers we might be losing if we do not introduce a higher resolution camera and if the projected profitability of a higher resolution 24Ã—36 mm format camera will justify development, marketing, and manufacturing investments , or if there is a sustainable market for the even greater costs of development, marketing, and manufacturing medium format cameras and lenses â€“ an area where we have no internal expertise.”

…While I could pretty much GUARANTEE Canon that their 1DX sensor itself would be a huge hit in a more affordable body, we’ll have to wait and see how many of those bodies they sell at $6800.Hopefully they’ll sell like hotcakes, and Canon will determine that it’s worth the $$$ to to make an affordable version in the $3K range.

So, despite the current rumors looking bleak, (at least for us wedding photojournalists and “casual but serious” photographers) …I’m still confident that eventually we’ll see GREAT new cameras from both Canon and Nikon.At this point though, with crazy resolution and slower speeds coming first,…it just looks like we’ll all have to wait a little longer for our dream cameras. :-(