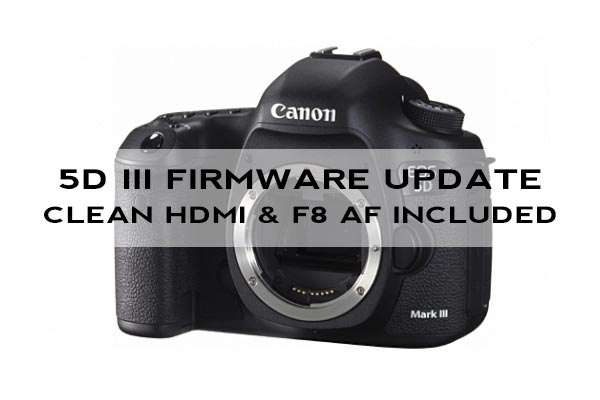 Canon’s 5D Mark III is set to be getting a nice upgrade in the coming weeks. It was announced back in October of 2012 that the new firmware was coming, but there was no news as to when. Canon recently updated their 5D Mark III page and it includes the scheduled date for the firmware upgrade, April 30th 2013 (11 Days from now).

The new firmware includes 2 very nice feature upgrades for the 5D III; Clean HDMI Output and improved Autofocus up to F8. The HDMI update is HUGE news for professionals who shoot video with the 5D III because that means that they will be able to record uncompressed video through the HDMI connection. The AF improvements will be great for Sports and Wildlife photographers who often use long telephoto lenses.

When shooting video, HDMI Output makes possible the recording of high-definition uncompressed video data (YCbCr 4:2:2, 8 bit) from the EOS 5D Mark III to an external recorder via the camera’s HDMI terminal. This, in turn, facilitates the editing of video data with minimal image degradation for greater on-site workflow efficiency during motion picture and video productions. Additionally, video being captured can be displayed on an external monitor, enabling real-time, on-site monitoring of high-definition video during shooting.

Even when the EOS 5D Mark III is equipped with an extender and lens making possible a maximum aperture of f/8, the firmware update supports AF employing the camera’s central cross-type points (currently compatible with maximum apertures up to f/5.6). Accordingly, the update will allow users to take advantage of AF when shooting distant subjects, benefitting sports and nature photographers, particularly when using telephoto lenses.

The new firmware update will be available, at no charge, in April 2013 from the Canon U.S.A. website and can be downloaded by end users or through Canon Factory Service Centers.

Canon U.S.A., Inc., is a leading provider of consumer, business-to-business, and industrial digital imaging solutions. With approximately $45.6 billion in global revenue, its parent company, Canon Inc. (NYSE:CAJ), ranks third overall in U.S. patents registered in 2011† and is one of Fortune Magazine’s World’s Most Admired Companies in 2012. In 2012, for the ninth consecutive year, Canon U.S.A. has received the PCMag.com Readers’ Choice Award for Service and Reliability. Committed to the highest level of customer satisfaction and loyalty, Canon U.S.A. provides 100 percent U.S.-based consumer service and support for all of the products it distributes. Canon U.S.A. is dedicated to its Kyosei philosophy of social and environmental responsibility. To keep apprised of the latest news from Canon U.S.A., sign up for the Company’s RSS news feed by visiting www.usa.canon.com/rss.