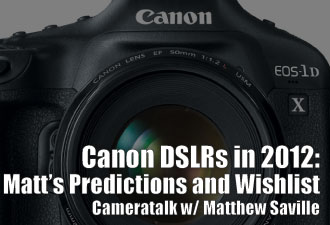 In the world of DSLR photography, next year is going to be one of the most exciting years in all of Canon’s history!

At least, it will be for low-light photojournalists.Finally, we will see the Canon 1DX, a full-frame flagship camera with all the speed and power of, (actually WAY MORE than) Canon’s previous 1.3x crop system flagship bodies.

To be honest, I was one of the nay-sayers who thought this would never happen.I was 100% positive that Canon would stick with the 1.3x crop for their flagship sports cameras, because it helped them maintain their advantage in the telephoto sports market. (We all remember those white-lens Canon ads, right?)…But anyways, they did it.They made a camera, well, like the Nikon D3.Party like it’s 2007, Canon?Sorry, I couldn’t resist poking fun at the fact that the Canon 1DX kinda prooves that Nikon was right all along in making the D3 and D3s, as full-frame, low-resolution speed (and low light) monsters…To be fair, the 1DX is a HUGE step beyond even the Nikon D3s, if you ask me.

But okay, so that’s a $6800 camera that VERY few of us will be able to afford, and it’s already been announced.Where are the predictions and the wishlist, you might wonder?Indeed, I am getting to those.

1.)The (eventual) Canon “5DX”:
For me, the most exciting part of the 1DX announcement is not even the 1DX at all, but what it means about the rest of the Canon system.Historically speaking, an affordable version of the 1DX should follow within a year, using the same sensor as the flagship camera.Both the Canon 5D mk2 and the Nikon D700 followed their flagship counterparts within 12 months, using an identical (actually, slightly improved) sensor.This has me VERY hopeful for a “Canon 5DX”.BTW, I’m just calling it the 5DX because that name helps explain what type of camera I think it will be, NOT because I have ANY official news or reliable leaks.I am simply talking about a 5D mk2 replacement.Maybe it will be called the 5D mk3, maybe it will be called the “3D” or the 6D.Either way, what I am HOPING for is a Canon 1DX sensor in a 5D mk2 body.Of course there will be a few other improvements, and I’ll talk about those next. Bottom line-by the end of 2012, or in early 2013 at the very latest, we’ll see a Canon 5DX announcement with the 1DX sensor, and it will hopefully cost no more than $3K.SWEET!!!(Could it come any sooner than late 2012, you ask?Unfortunately, I doubt it.Since it will have the same exact sensor as the 1DX, Canon will need to maximize 1DX sales for at least 6-9 months before even announcing a more affordable version.Sorry, it’s just a business decision!The only possible way we could see an affordable FF DSLR in early or mid-2012 is if it has a completely different sensor than the 1DX.Rumors are circling about a 32-34 megapixel sensor being developed, no doubt to compete with the Sony/Nikon 36 megapixel sensor that is coming.More on that soon…)

2.)The trickle-down / dramatic improvement for Canon’s “affordable FF” autofocus:Â
Autofocus has been the single biggest issue that 99% of 5D and 5D mk2 users have had.Basically, the 5D had the AF guts of a 20D, and the 5D mk2 had the AF guts of, well, a 20D / 30D.Sure, they put a little extra effort into the center AF point, and it’s actually quite accurate if you have a good lens and good AF technique.But as any professional knows, there’s a HUGE difference between “it can get the job DONE”,and “it makes the job SO EASY”…

Okay so whether or not the 5D mk2 autofocus is adequate enough has always been a HUGE debate, but the bottom line for me is that it COULD be better but Canon made a calculated, tactful decision to NOT just slap in a flagship AF system, like the sub-$3K Nikon D700 and sub-$2K D300 have.To me, that’s an upsell tactic, plain and simple.The only problem being, there was a HUGE gap between the $2700 (MSRP) 5D mk2, and the (originally) $8,000 1Ds mk3.A huge gap that Canon MUST fill within their next generation of 5-series bodies, or in my opinion there will be another huge wave ofCanon->Nikon switchers, …no matter how awesome the $6800 1DX is!

I swear I’m getting to the point-Okay so, the exciting part for me is that Canon has finally updated their 45-point AF system to something completely re-designed, the 1DX’s new 61 point AF system.Maybe, just MAYBE, this new AF system will free up Canon’s “OLD” flagship AF system, (the 45-point system that still works INCREDIBLY well) …and just maybe we will see that old AF system in the 5DX. And for those of you Canon users out there who understand what this means, well, basically you’re all about to get your dream camera.A mid-resolution, crazy high-ISO, powerful autofocus Canon FF DSLR for around $3K.

Knowing Canon, they’ll probably make it $4000 to fill the gap that the 1.3x lineup is leaving, but hey that’s still not bad!

3.)An eventual split in the “affordable full-frame” lineup:
Rumors have been flying that Canon will not release just ONE new affordable full-frame body, but TWO.We may not see both until 2013, but basically the rumor goes like this-Canon will split the 5-series lineup, and come up with a 5DX / 5Ds type thing where one has lower resolution but a lot more speed & accuracy, while the other will just go nuts with megapixels but pretty much keep the same “mediocre” body of the current 5D mk2.

I’m predicting, that after the 1DX hits shelves in march, within 9-10 months we’ll see at least one affordable FF DSLR, and within 12-24 months we’ll see a second affordable FF DSLR.I don’t know which will come first, all I can say is that it will beVERY interesting if Canon releases an 18 MP 5DX first while Nikon releases a 36 MP D800 first.THAT would certainly turn the tables in Canon’s favor for a while.At least, for those who don’t read this article and realize the long-term probabilities…;-)

4.)The Canon 7D may or may not be replaced in 2012, but I don’t think the update will be all that exciting.I mean, where could they go?Better high ISO, of course, but that’s a given.More than 18 megapixels?Oh boy.New autofocus?Not likely, since Canon spanned FIVE generations from the 20D to the 60D (also the 10D?)…without barely updating the AF system.Maybe, Canon could put dual card slots in a 7D mk2, that would be exciting for me.Other than that, it’s already a near-perfect camera.

5.)We’ll probably see a Canon 50mm f/1.4 USM update, at least I hope so!Over the past couple years, Nikon has worked VERY hard to update it’s prime lens lineup, because that was indeed Nikon’s single greatest downfall compared to Canon’s gorgeous bokeh.But now, even my new $200 Nikon 50 f/1.8 AFS-G runs circles around Canon’s aging $400 50 f/1.4. If you ask me, Canon is going to have to update at least their 50mm f/1.4, and maybe if we’re lucky they’ll also update one or two other “affordable” primes.

Now, what do I WISH Canon would do, but I have absolutely no ability to predict?

7.)Dual card slots in the 7D and 5D mk2 replacements:
Yes, please!This would be great for both video and still photographers, especially those who shoot in high-pressure situations.Instant backup is a beautiful thing when your’e photographing a wedding! I don’t care if they have to do CF+SD, heck I’d even suffer a complete switch to SD+SD if I had to, but I doubt that will happen.Again, previously this was HIGHLY un-likely because of Canon’s marketing & sales tactics that would have withheld the CF+SD feature because that is what the 1-series used t to have.However, now that the 1DX has dual CF slots, I’m betting Canon will feel a little more comfortable making an affordable camera with CF+SD slots.

Personally, here’s what I’d do if I had dual card slots:I would continue to use my 4GB CF cards as usual, swapping them out when they get full.However I would also go out and buy a 32 GB or 64 GB SD card, and I’d leave it in the camera for the entire day. Then at the end of the day I could just take out that single SD card, and either use it to download to my computer, (since practically EVERY computer has an SD slot these days) …or I could be even more OCD about data safety, and send the SD card off-site with my 2nd shooter, or take the SD card home while I leave the CF cards in the studio, etc.But, image security is a whole other discussion, for another time!

8.)One-click image review zooming:
Please, Canon, can we FINALLY get this one simple feature?Honestly, Canon’s image review system is ANCIENT. For one, unless I’m VERY mistaken you can NOT just start zooming in on an image during “instant playback”.Even when the image is showing on the back of the camera right after you click a picture, if you want to zoom in you first have to hit the play button.Even if the image is already “playing”!?I just don’t understand what’s up with that.Then, of course like most cameras, you have to click “zoom, zoom, zoom, zoom” …and then “scroll, scroll, scroll, scroll” just to confirm perfect focus.Sure, it only takes an extra 5-10 seconds.But that can really make a difference, when you’re trying to shoot formals at a wedding and the flower girl or ring boy are squirmy and about to explode into a tantrum.And in general it’s just SO dang convenient!Anyways, that’s just one feature I really wish Canon would introduce.Allow the “SET” button to be customized to zoom in to 100% with one click, during image playback / review.PLEASE.

9.)Built-in intervalometer?
Now we’re just getting into wishful thinking territory here.I’m pretty sure this will just NEVER happen, because of Canon’s sales-driven business philosophy.(However Nikon has been doing it since, um, 2003 at least?)…But hey, Canon eventually added wireless IR flash control to the 7D in 2009, so I will always be pushing for this additional feature…:-)

10.)Dedicated ISO control:
This is just a default wishlist item that I’m hoping ANY camera maker will soon adpot, so that other makers will eventually follow.Basically, I want to be able to re-program my camera so that ISO is dedicated to a control dial at all times, if I so desire.The way I see it, in this day and age we have GORGEOUS image quality all the way from ISO 50 to ISO 3200 or even 6400.That’s 5-7 stops of exposure that are still “locked up” behind the slight inconvenience of button+dialÂ Â control.You may think I’m crazy, but it is actually quite often that I can go through an ENTIRE day of shooting without changing my aperture.Theater is one major thing; I often take 1,000 photos in a row at f/2.8.And yet, I need to adjust my ISO up and down based on the light.Sure, I could just start at ISO 6400 and f/5.6, and then open up my aperture when light decreases, but I’d MUCH rather shoot at ISO 1600 and f/2.8 and just bump up my ISO when necessary.

Anyways, I know it’s a long shot but I’ve been pushing for this control capability for both Canon and Nikon for a few years now, and I’m hopeful that they’ll embrace it some day.