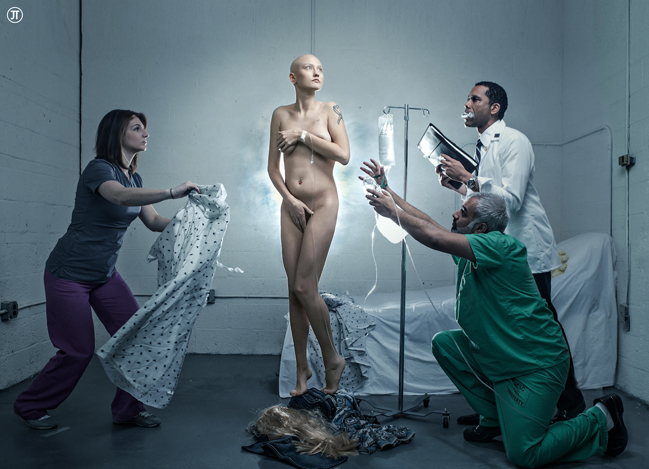 Based out of Washington DC, photographer Jonathan Thorpe has worked with some of  the biggest companies in the world, has been published internationally and has photographed award winning musicians and celebrities. He also is part owner of Skyhaq Agency, an advertising firm, produced several commercials and directed music videos.

In this project, Jonathan partnered up with his friend, Heather Byrd, a young woman going through chemotherapy to battle leukemia. Jonathan took the time to tell us about his experience and how he shot the above image, “Renaissance of Heather.”

The Birth of an Idea

Jonathan: I had initially reached out to Heather regarding a beauty shoot, but when I started thinking more about it, I knew I could tell a better story.

I then reached out to my art director Andi, and she mentioned the painting Birth of Venus. The painting shows Venus being born from the sea, and there are a few different interpretations of it, but one fact is commonly found in each one, that Venus was the epitome of beauty and intelligence. 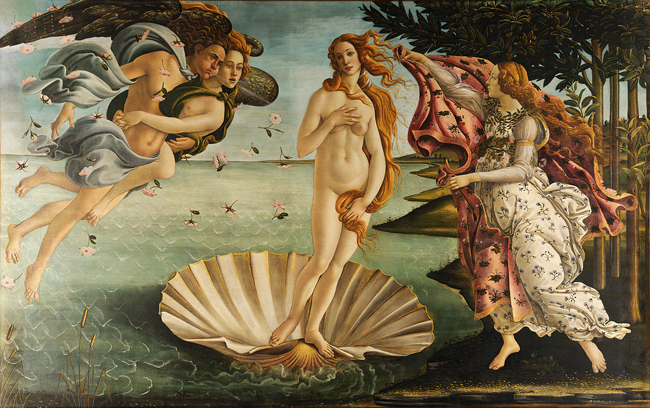 It would be a perfect concept, but would need a modern and thought provoking twist. Instead of the beauty of the forest and water behind her, it would be replaced with the coldness and drab colors of an old hospital room and bed. Instead of a woman draping Venus in beautiful cloth, a nurse would be covering her with a hospital gown. Instead of the two wrapped in love to her side, two doctors would be there, one with oxygen mask, the other with syringes and a chart. And finally, instead of her being presented on a shell where she is born, she would be standing on a pile of her own clothes, and wig.

Setting Up the Scene

Jonathan: The location was small. Very small. Just being inside this tiny room, not much larger than a prison cell, would help set the mood for the photo nicely. I wanted the room to have a cold, empty feeling to it. 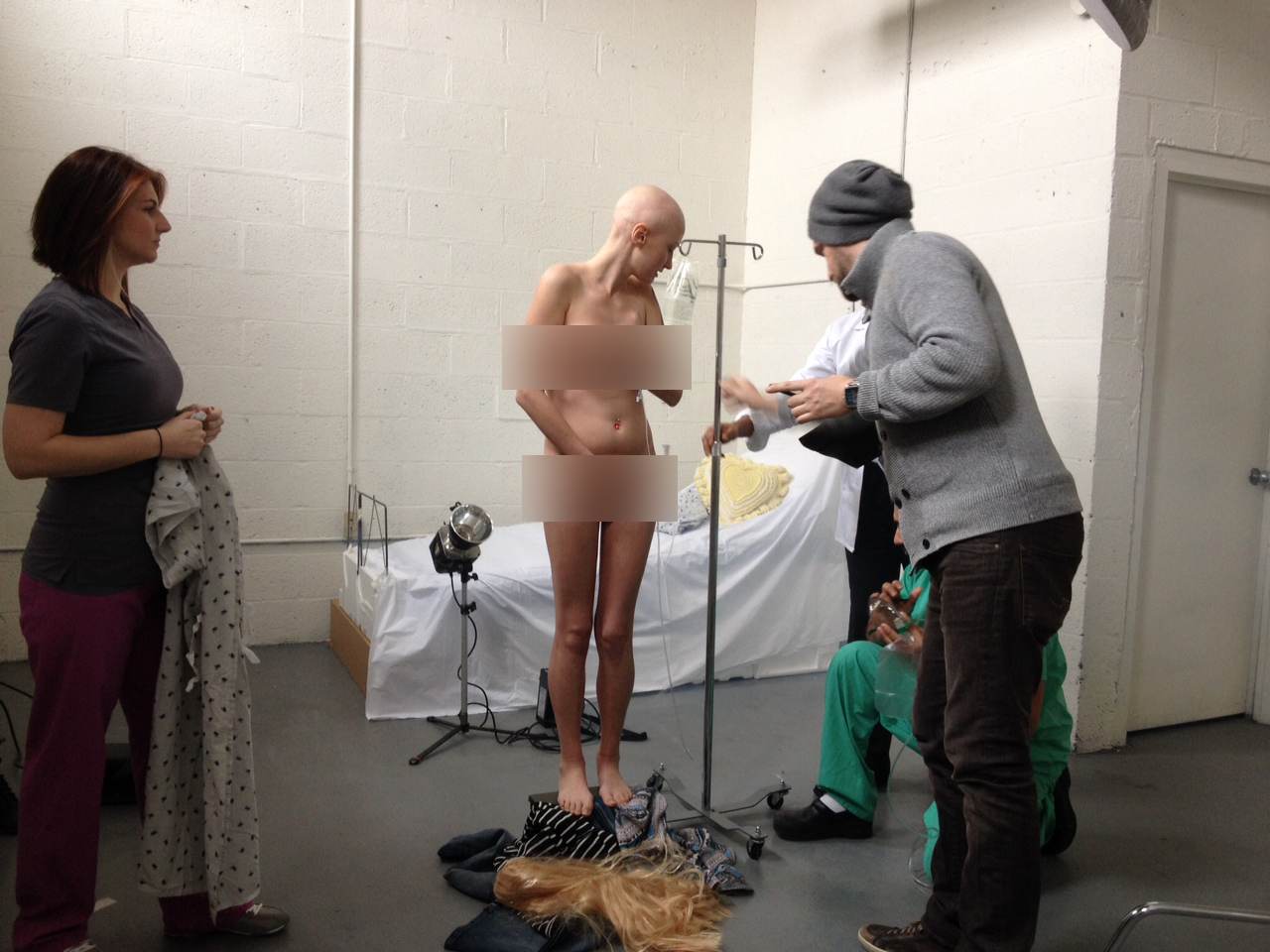 I knew lighting would play a very key role in this, so I intentionally lit it “flat,” other than Heather, of course. The first light I would setup was an 8 foot parabolic, with white on the side. This was set very high on a c-stand and directly over my camera. I angled it down, to help simulate the flat, cold lighting you would find in a old hospital. I used a white lightning x3200 head set to 1/32nd power.

The next light I set up was a large Calumet beauty dish. Before doing the shoot, I modified the middle dish but using a piece of cut plexiglas wrapped in a CTO gel. I wanted this light to be slightly warm on Heather to make her stand out of the coldness of the overall image. This was another white lighting x3200 head set to 1/16th.

Third and final light was an Alien Bee 1600 at 1/8th power behind Heather, to give her a rim light to further emphasize the “glow” around her. We used a small fog machine to help with that effect. The Alien Bee also provided a bit of rim to the doctors, and helped them stand off the background as well. All lights were triggered with Paul C Buff Cyber Syncs. 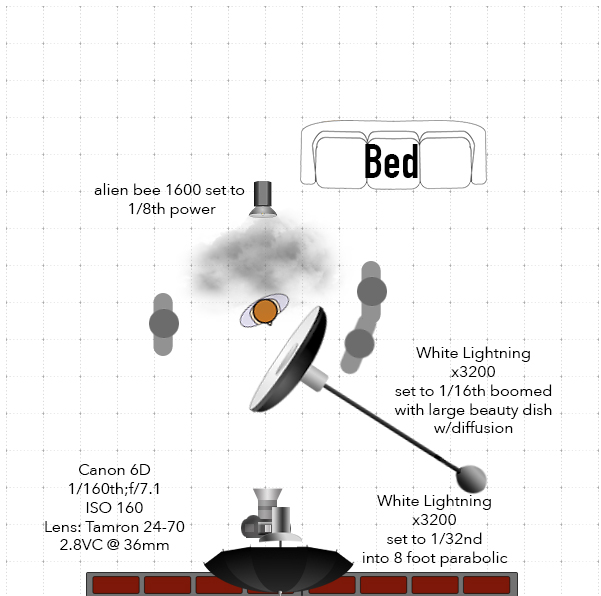 The Gear and the Settings 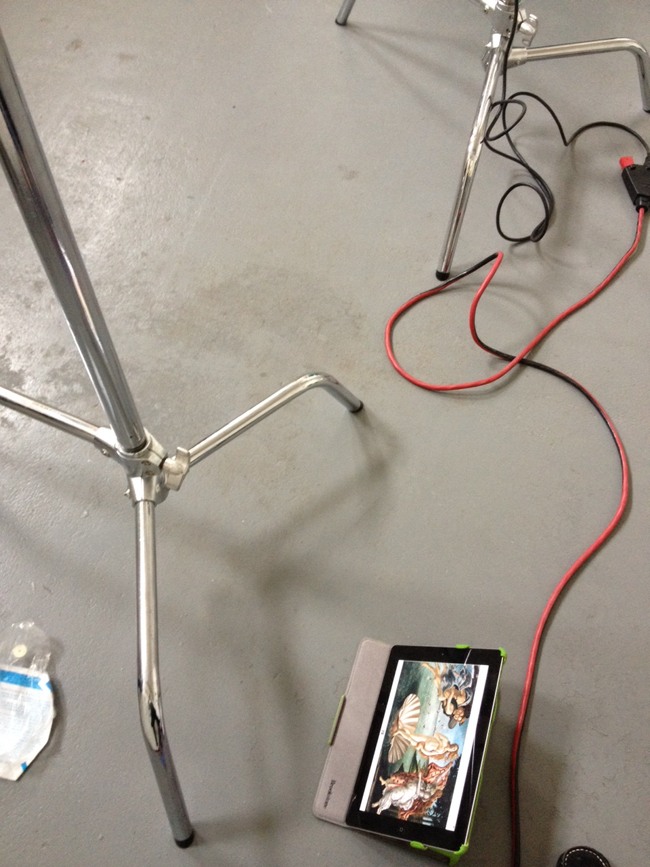 Something else to point out about the 6D, since the room was so small I had to have my camera on a tripod totally backed up to the opposite wall, meaning I couldn’t sit behind it, to look through the view finder. Using the cameras built in wifi and the Canon EOS Remote app, I was able to shoot this using my iPhone has both a trigger and display. I shoot this way a lot as I’m not a fan of being behind a camera when directing people on set. Being able to see what is happening with both eyes, helps me visualize what the photo will look like when its completed.

Jonathan: We only shot for a total of 20 minutes. Thats all it took, and thats all that was needed. The picture we used was actually the last frame we took. Why was it the last frame? because as soon as I saw it, I knew THAT was the one.

For the first time in my professional photo career I knew what it felt to make a picture that actually moved people, to feel. It really is an unmatched feeling. It wasn’t about how much money I was going to make, or how many magazines the photo ended up in, what mattered was making a compelling image that people can relate to, understand, and learn from. What mattered was showing that in any situation, any at all, beauty can be found not in fancy clothes, or makeup, but in simply the strength in determination of an individual with zero desire of giving up.

To see more of Jonathan Thorpe’s work, visit his website.

CREDITS: All photographs shared by Jonathan Thorpe are copyrighted and have been used with permission for SLR Lounge. Do not copy, modify or re-post this article or images without express permission from SLR Lounge and the artist.

Tags #how I shot it #Cancer #Botticelli #Renaissance
Previous

What's A Google Trusted Photographer? Here's How to Become One

How to Shoot Beautiful Wedding Films