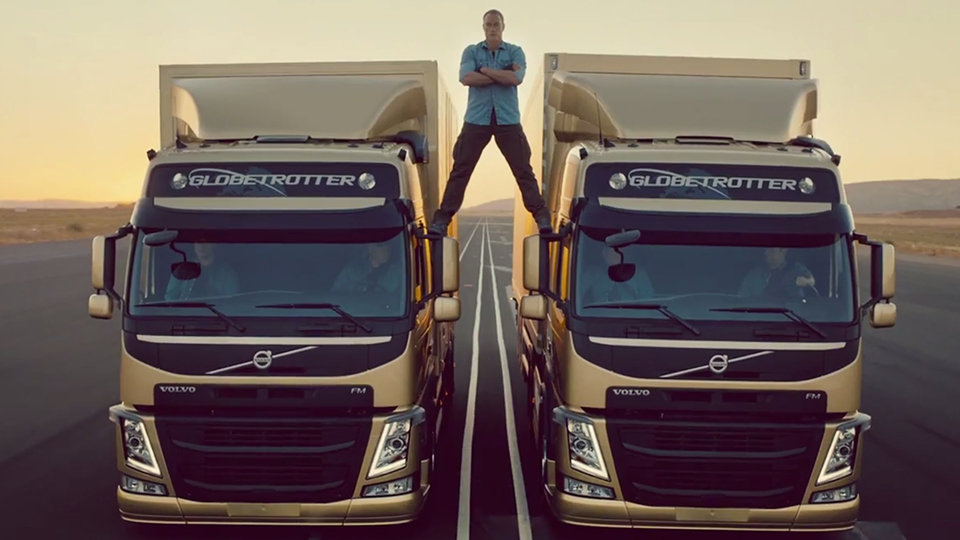 What do you get when you put a 53 year-old action movie star from the 90’s, two semi trucks, and Enya together in one commercial? (Don’t worry, we were shaking our heads too before we took a peek at this awesome Volvo Truck ad).

In an effort to demonstrate the “stability and precision of Volvo Dynamic Steering,” Volvo came up with a pretty creative concept and story to illustrate a topic that, for most people, is kind of yawn-worthy. The ad is 6th in a series of stunt videos that Volvo has released to promote it’s truck. From hamster’s steering a 15 ton truck on a windy quarry to dangling their President from a crane 65 ft over a port, Volvo might have outdone themselves in this 6th “Live Test” video. In this video, Jean-Claude Van Damme is doing his signature splits while standing on the mirrors of two semi trucks, while the trucks drive. Backwards. And to make it even more epic, the entire thing is set to the tune of Enya’s “Only Time.”

With only 15 minutes of morning light, the spot was shot in one take, after three days of rehearsing. The Volvo crew assures us that there are no wires or CG (computer graphics) – just their awesome trucks and a 53 year-old star that proves that he’s still a bad ass.

Here’s the behind the scenes video where they explain to Jean Claude what they want him to do. His face as he processes their concept, is almost as fantastic as the commercial itself.

The Volvo Live Test 6 already has 3.5 million views on Youtube and it was posted just this morning.  This just goes to show that a good concept + a creative story = viral marketing material. Oh, and Enya always helps.

Do ads like this sell product? Or is it just another buzzworthy gimmick?