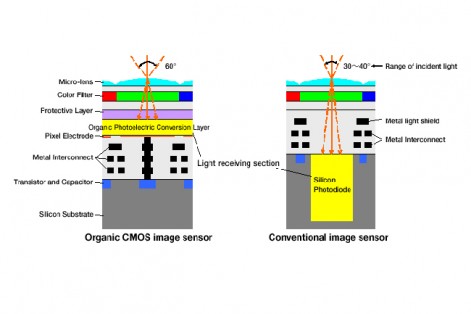 Along with Fuji’s X-trans sensor and Panasonic’s highly-sensitive micro-splitter sensor, this may become one of the biggest breakthroughs in digital camera sensor technology in recent years.

Fuji and Panasonic just revealed in a joint press release that they have been working on the world’s first organic CMOS sensor that promises the industry’s highest dynamic range of 88db signal-to-noise ratio for CMOS sensor. This prevents highlight clipping and improves signal to noise ratio especially in low light.

By comparison, the current king of dynamic range, the Nikon D800E, has a dynamic range of 46dB (Source: Adorama test).

UPDATED CALCULATION: Thanks to Anonymus 43rumors.com, the proper formula to convert dB to EV stops of dynamic range is:

(*Refer to the dynamic range chart on the right hand-side: wikipedia)

Additionally, because the organic photoelectric conversion layer is much thinner than conventional silicon photodiode (0.5 micron vs 3.0 micron), the range of incident angle on the micro-lenses on top of the sensor can be increased from 30-40 degrees to 60 degrees, improving color saturation and “faithful color reproduction with no color mixing.”

Finally, typical CMOS sensor pixel has circuitry built around each pixel, which takes up surface area space. The organic sensor pixel utilizes 100% of the light receiving area, which means that it can “harvest all the light received by the sensor… and boost sensor sensitivity by 1.2 times compared to conventional sensors to deliver clear images even in low light.”

The most promising part is at the very end where the press release states that “the sensor technology has cleared reliability tests involving the application of stress such as temperature, humidity, electrical voltage and light, paving the way for the use of the organic CMOS image sensor in a wide range of applications.”

This is a very exciting news on sensor technology and as we hear more about it, we will keep you up to date. In the mean time, here is the press release from Fujifilm and Panasonic

FUJIFILM Corporation (President: Shigehiro Nakajima) and Panasonic Corporation (President: Kazuhiro Tsuga) have developed organic CMOS image sensor technology that uses an organic photoelectric conversion layer with a photoelectric conversion property at the light receiving section of an image sensor to achieve performance beyond that of conventional image sensors(*2). Applying this technology to the image sensors of digital cameras and other imaging devices expands its dynamic range(*3) and enhances sensitivity (*4) further to prevent highlight clipping in bright scenes and capture a dark subject with vivid colors and rich textures.

The industry has put into continuous efforts to explore image sensor technologies for increasing their number of pixels. This has dramatically improved sensor resolutions, but, in order to further boost image quality, it is necessary to expand the dynamic range, enhance sensitivity and prevent cross-talk or color mixing between pixels. Panasonic took advantage of its semiconductor device technology to boost image quality for its high-performance image sensors. Fujifilm, on the other hand, has developed highly-reliable organic photoelectric conversion layer with high absorption coefficient to be used on a sensor’s light receiving section instead of silicon photodiode(*5) in its effort to build a new image sensor technology.
In the latest collaboration, Fujifilm and Panasonic have combined Fujifilm’s organic photoelectric conversion layer technology with Panasonic’s semiconductor device technology to jointly develop an organic CMOS image sensor that outperforms conventional image sensors. The new organic CMOS image sensor offers the industry’s highest dynamic range of 88dB, advanced sensitivity 1.2 times more sensitive than conventional sensors(*2) and broader range of incident angle(*6) to enable the production of more sensitive and compact cameras with better image quality.

The two companies will promote the application of this organic CMOS image sensor technology to a wide range of products including security cameras, in-vehicle cameras, mobile device and digital cameras.

Fujifilm and Panasonic will present the research results at the 2013 Symposium on VLSI Technology (VLSI2013) to be held in Kyoto on June 11, and the 2013 International Image Sensor Workshop to be held in Utah, U.S.A. on June 15.

I. Industry’s highest dynamic range of 88dB to prevent highlight clipping and produce a vivid and texture-rich image even in low light
Panasonic’s semiconductor device technology has improved the signal saturation value(*7) by four folds compared to that of conventional image sensors. Coupled with the newly-developed noise-cancelling circuit, the sensor technology provides the industry’s highest dynamic range of 88dB, preventing highlight clipping in bright scenes and capturing a vivid and texture-rich image in low light.

(*7) The maximum amount of electric signals that can be handled. Receiving a signal greater than this value leads to highlight clipping.

II. 1.2 times higher sensitivity than conventional sensors to capture clear images even in low light
The transistors and metal interconnects in each pixel, fabricated using Panasonic’s semiconductor device technology, are coated with photoelectric conversion layer, developed using Fujifilm’s organic material technology. The area of the light receiving section becomes limited in conventional image sensors because of the existence of metal interconnects and the need to form light shield film to prevent light incidence into areas other than the photodiode in each pixel. However, the organic CMOS image sensor technology coats the sensor with organic film, which can harvest all the light received on the sensor. This boosts sensor sensitivity by 1.2 times compared to conventional sensors to deliver clear images even in low light.

III. Range of incident angle expanded to 60 degrees for faithful color reproduction (*See the image sensor illustrations on the previous page)
The thickness of the organic film with high absorption coefficient, developed by Fujifilm, has been reduced to just 0.5 microns, or one severalth of the thickness of silicon photodiode in the light receiving section. Since the conventional silicon photodiode measures at least 3 microns in depth, the range of incident angles was limited to around 30 – 40 degrees. The thin film, achieved with the organic CMOS image sensor technology, has enabled the expansion of this range to 60 degrees, efficiently utilizing light entering at an angle for faithful color reproduction with no color mixing. It also gives greater flexibility in lens designs, facilitating the reduction of overall camera size.

Fujifilm has developed a process technology to produce inorganic films for protecting the organic film. It prevents the entry of moisture and oxygen into the organic film to safeguard it against performance degradation. The sensor technology has cleared reliability tests involving the application of stress such as temperature, humidity, electrical voltage and light, paving the way for the use of the organic CMOS image sensor in a wide range of applications.

FUJIFILM Corporation is one of the major operating companies of FUJIFILM Holdings. Since its founding in 1934, the company has built up a wealth of advanced technologies in the field of photo imaging, and Fujifilm is now applying these technologies to other new business fields. Fujifilm brings continuous innovation and leading-edge products to a broad spectrum of industries including medical systems / life sciences, graphic arts, document solutions, highly functional materials, optical devices and digital imaging. Fujifilm aims to help enhance the quality of life of people worldwide by providing top-quality products and services with its leading-edge, proprietary technologies. Through its corporate philosophy, Fujifilm demonstrates its commitment to making a significant contribution to society. For more information, please visit http://www.fujifilm.com.

Panasonic Corporation is a worldwide leader in the development and engineering of electronic technologies and solutions for customers in residential, non-residential, mobility and personal applications. Since its founding in 1918, the company has expanded globally and now operates over 500 consolidated companies worldwide, recording consolidated net sales of 7.30 trillion yen for the year ended March 31, 2013. Committed to pursuing new value through innovation across divisional lines, the company strives to create a better life and a better world for its customers. For more information about Panasonic, please visit the company’s website at http://panasonic.net/.

Is the 15" Macbook Pro Retina the Ultimate Photographer's Laptop?