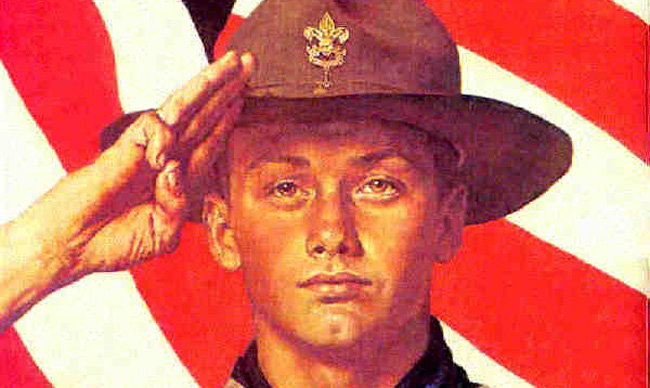 A Boy Scout on a 3 week trip with his troop found himself with a gun to his head after an incident at the Canadian border into Alaska. About ten days into a trip with Boy Scout Troop 111 from Mid-Iowa, they stopped their vans at the border and one of the boys took a photo of a member of the border patrol.

“The agent immediately confiscated his camera, informed [the boy] he would be arrested, fined possibly $10,000 and 10 years in prison,” Jim Fox, the troop leader said. He was then told that it was a federal offense to take a picture of a federal agent. Everyone in the van was detained and searched, along with their belongings.

While complying with the agents orders, one of the boy scouts was taking luggage from the top of the van to be searched, when “He hears a snap of a holster, turns around, and here’s this agent, both hands on a loaded pistol, pointing at the young man’s head,” Fox explained to KCCI News.

The troop was released after a 4 hour ordeal, the photo was deleted and they made it back to Iowa this last weekend with quite a story to tell.

According to reason.com, federal rules specifically permit photographing federal facilities, at least for “news, advertising, or commercial purposes.” And adds that the ACLU also offers guidance for photographing federal agents, “Taking photographs of things that are plainly visible from public spaces is a constitutional right – and that includes federal buildings, transportation facilities, and police and other government officials carrying out their duties.”

Charles Vonderheid with the Mid-Iowa Council Boy Scouts of America said that the boys learned a valuable lesson:

We want to make sure they follow the rules. A Scout is a good citizen. It would be a great lesson in civics for that young man and that troop.

If I was a parent of one of those scouts, I would be upset about a civics lesson my child learned with a gun pointed at his head. But that’s just my personal opinion.

What are your thoughts?