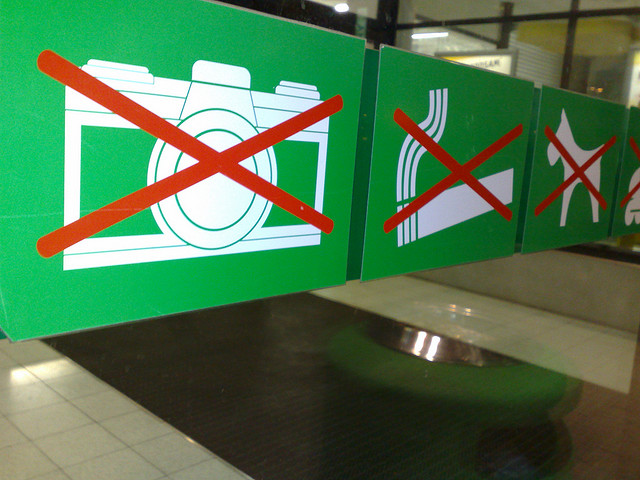 You’ve likely heard of the adage, “It’s better to ask for forgiveness and not for permission.” And be honest, how many times have you muttered that very adage when you’ve decided to hop over a fence bearing a no trespassing sign just to get the perfect photo or maybe photographing someone on the street….um, YOLO right?

Though we’ve probably all broken some law that we deem silly, such as having a sleeping donkey in your bathtub after 7pm (like in Oklahoma), not adhering to a law, no matter how ridiculous or irrational we may think it is, in a foreign country, doing something as simple as photographing a sign may get you arrested and sentenced to 5 years in jail.

[REWIND: POSTING A PHOTO, VIDEO ONLINE WITHOUT CONSENT IS CONSIDERED A CRIME IN UAE]

Dr. Robert Alan Black, a 70-year old American professor is in a jail in Abu Dhabi and facing a possible 5 year sentence for photographing a ‘No photography’ sign, ironically. Black was in the capital of the UAE to lecture at a conference when he took a walk around the city. An avid amateur photographer, Dr. Black liked to photograph buildings and was reportedly amused by the sign that banned photography. He snapped a photo of it, unaware of the extremely strict photography laws in the UAE. He was promptly arrested after and was jailed for over a week before a sympathetic interpreter was able to send a message to his family who had been searching all over the world for him. They ended up contacting the US Embassy, who stepped in to provide guidance.

According to article 168 of the UAE penal code, people caught taking photographs of banned areas such as palaces and embassies can receive up to five years in prison and a hefty fine.

Things to Consider When Photographing in Foreign Countries

When traveling to a foreign country, make sure you know the local laws. Something that you’d normally think nothing of, like chewing gum on the subway (Singapore) or snapping a photo of a passerby on the street without their permission (Brazil) may be against the law and can land you into heaps of trouble. You should check your country’s tourist office,  or ask someone you know who lives in the country you’re traveling for information pertaining to the country’s customs, laws and etiquette regarding photography.

A good resource for Americans traveling to foreign countries is the U.S. State Department’s website, where they list travel alerts, country specific information, etc to help prepare you for your trip.

What could be considered as normal in one culture, could be construed as rude in another culture. Again, do your research. Just because something may be acceptable in your country of origin, does not mean that it is acceptable in a foreign country. It is always good to remember that you do not have the same rights in another country as you do in your home country. Ignoring signs, law enforcement or any official postings is not advised, as they are there for a reason.

When you’re in a foreign country, respect that culture and try your best not to be another clueless tourist, because in some countries like the UAE, not knowing the law is not a defense. Just use common sense.

If you do find yourself in trouble on foreign soil, your best bet is to get word to your country’s embassy for help. Keep in mind though, that embassies are limited to what they can do. Just because you’re an American, it doesn’t give you a free pass out of trouble. Your constitutional rights are null and void in a country with their own set of rights and laws, even if the country is an ally of your home country, such as the case with the UAE and the U.S.

Currently, Dr. Robert Alan Black’s family is trying to raise funds to hire him an Emirati lawyer to represent him (as the UAE law states) which costs tens of thousands of dollars upfront. There is a Facebook page set up to garner support and a petition which has amassed over 3,000 signatures asking the U.S. State Department for diplomacy in helping release Dr. Black.

— Want to read this article again later? Be sure to click on the Save button up top to bookmark this post so you can easily find it again. Don’t want to miss any of my ramblings? Be sure to subscribe to my articles right below my bio – it’s a big green button that says SUBSCRIBE. You can’t miss it! —