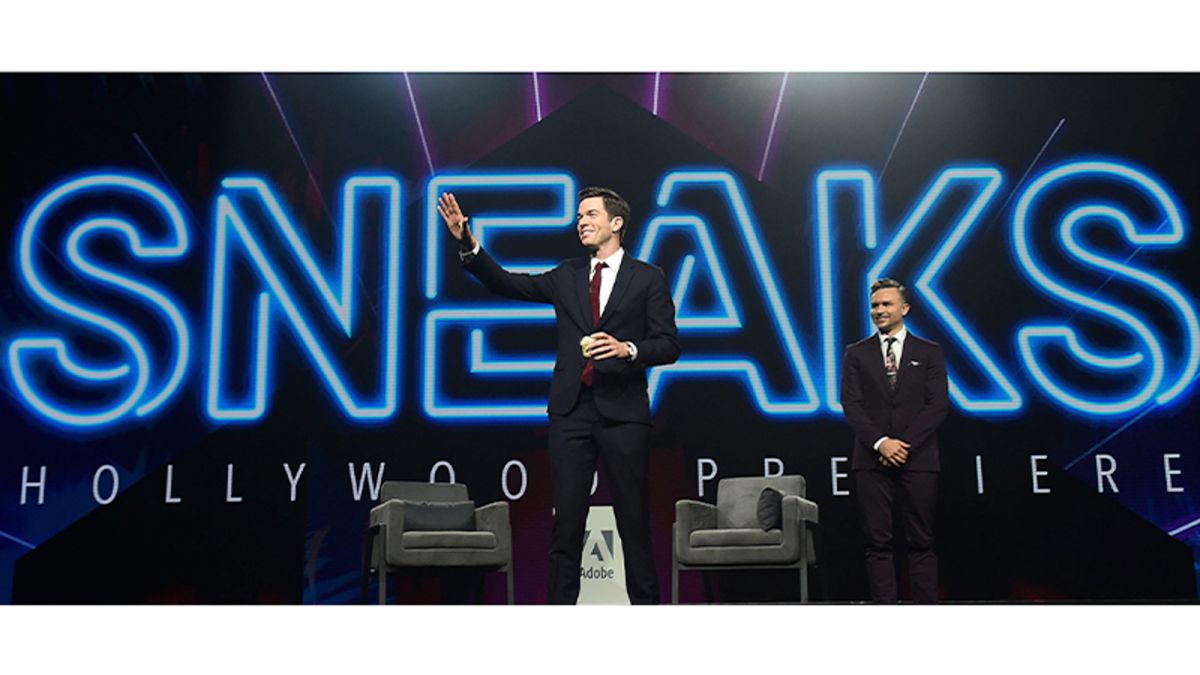 It’s a fan-favorite tradition with MAX where the teams showcase all the latest technology they’re working on for Adobe that may, or may not, end up in the creative suite. Last night at Sneaks I got to see these new product features that could end up into the product roadmap, and I have to say, even though some of the demos had a few technical difficulties, I was blown away by the innovation and creativity that was happening by the brilliant Adobe dev team!

The evening was “co-hosted” by incredible comedian John Mulaney and Senior Creative Cloud Evangelist Paul Tran, who together with a plethora of Adobe Engineers, showcased a list of new ideas and technology that “went all the way to eleven” according to Trani.  (That’s a Spinal Tap reference for those who missed it…trust me…you had to be there)

Well, since not everyone could make it into the room, or the conference itself, we’ve gathered up the videos for all these potential new features and tools below. Have a look at each of these fun, crazy, and impressive projects below and let us know what you think!

When taking group photos, people usually take turns as the photographer, so one person is always missing from the photo. Powered by Adobe Sensei, Project All In eliminates the need for a tripod and a timer by automatically identifying and adding missing people so that no one gets left out.

While this particular project was very rough and in beta, it was INSANELY impressive how it matched and identified missing subjects from a scene and automatically cut/pasted them together to make a proper photograph. It still requires a lot of work, but even in it’s beginner stages it’s kind of mind blowing how fast subject swapping and additions could be made.

Content creators are constantly looking for specific sounds that occur multiple times in audio recordings. Wouldn’t it be great if you could simply select a couple of target sound examples, and have a machine find the rest? Boom. *Powered by Adobe Sensei.

This one was out of my wheelhouse of knowledge, but it was INCREDIBLY impressive at how fast and easy it was to remove unwanted noise and distractions from your audio clips. So tell me audio engineers, are you impressed?

Another tool that I’d personally not use much, but was still incredibly impressed with. I know a lot of designers and animators who’d probably rejoice at the amount of time and effort saved that this tool could bring. What about you?

I had a few discussions about this project and its applications with some colleagues at MAX yesterday, and we all agreed, that in a world that’s increasingly connected and “Augmented”, this tool has incredible value to marketing and advertising specialists….let alone the applications in gaming, entertainment, and storytelling!

Whether used as an inspirational tool for designers or to bring sketches to life, Project Image Tango mixes two assets to create a new image that has the detailed shape of one and the intricate texture of the other. *Powered by Adobe Sensei.

Now, this project was CRAZY. I’ve seen similar projects in beta in the past where the A.I. would guess what your drawing was and “fix it” or at least name what you’re doing….well Adobe took things to the next level here with #ImageTango. The ability to create something new with design and layout variations in a few simple clicks…well…it’s a designer and creators dream! There’s a mountain of applications for this within the fashion industry alone!

In today’s digital world, animated texts are used everywhere. While popular, the process of converting text to animated keyframes is tedious and tiring. Project Fantastic Fonts provides predefined effects so that a previously exhausting task is now quick and painless.

Again, this was a tool that’s pretty far removed from my day-to-day, but it doesn’t mean I didn’t appreciate it! Especially geared towards the mobile developer/designer, this application lets you take advantage of the gyroscopic tools in iPad/iPhone devices to truly take personal control over the animations and customization of your text.

The ability to track a person is critical for editors as they produce videos, but it’s not easy. Project Go Figure makes it possible to track using skeletons and contours, enabling smooth and robust tracking even in a crowded scene. *Powered by Adobe Sensei.

Now this was kind of incredible! Something I know nothing about, so please tell me if there’s other technology out there that is comparable to this, but personally I was amazed at how easy it was to use (at least in the sense of the demo) to create animations from scratch!

Quickly solve the challenge of relighting outdoor photos and videos with Project Light Right. Relighting outdoor videos and images has long remained beyond the reach of the casual photographer, especially when it comes to large-scale outdoor scenes, where controlling the lighting is close to impossible. Light Right quickly solves the challenge with 3D scene geometry. *Powered by Adobe Sensei.

Now, this project here, this is the one that had my jaw on the floor! As a landscape and portrait photographer, chasing light is well…the bane of our existence! This application is a quite literal game-changer in the world of photography….and while many will balk at the manipulation of the image (yes yes, film is the true visual platform), sometimes you just don’t have the time or budget to capture that image and location at the perfect time or conditions….and sometimes you just want something beautiful in your library. This tool…I mean…just watch the video and you’ll see what I mean!

Enhances amateur audio recordings and turns them into professional-sounding recordings with the click of a button. The technology helps with enhancements such as denoising, dereverbing, equalization, and environment matching so that you can take your audio to the next level. *Powered by Adobe Sensei.

Again, sort of out of my day-to-day, but this was insanely impressive. I’ve done a little bit of audio clean ups before and it took me HOURS to do what this tool was able to do in just a few seconds.

A plugin that allows people to enrich their artwork by “painting with light” in Adobe Illustrator. The integration of a simple 2D path tracers might just open up a whole new area of 2D illustrations.

This tool, is another that had my jaw on the floor. I want to see how it could integrate into a photo or video application, or even if it’s possible to merge those worlds….either way….this is freaky technology and very worth keeping an eye out for.

Automatically detect facial features and adjust them to enhance a portrait or add a creative character to a fun shot. Project About Face also allows you to identify and undo these adjustments to revert back to the original image. *Powered by Adobe Sensei.

Now here’s an interesting tool, in the world of anti-retouching and body positivity…this tool can identify manipulation in a photo, even something as simple as some shadow and highlight recovery! And in some cases, it can even “Restore” a manipulated image back to its default state. I’m sure a lot of people out there will hate on this one, but i’m intrigued to see it released into the wild, especially in the photo-contest and photojournalism world. We gotta be safe from those deep-fakes after all!

And that’s about it, to learn more about all the technologies highlighted during Adobe Sneaks, check out the Adobe Blog and be sure to let us know what you think of it all in the comments below. Remember, while these are all pretty cool, it’s possible that one, or even all of these will never see the light of day in a production-environment. We’ve got no guarantee we’ll get any of these, but i’m sure that if we keep letting Adobe know what features we liked the best, things may move along faster in the right direction. Adobe tends to move forward with these projects based on the audience feedback and excitement…so if any of these catch your eye, be sure to let them know by commenting on it at Adobe and on their social media channels, as well as here on our site in the comments!

The New 47.3 Megapixel Leica SL2 is a Literal Powerhouse and You’d Be Crazy to Pass It Up