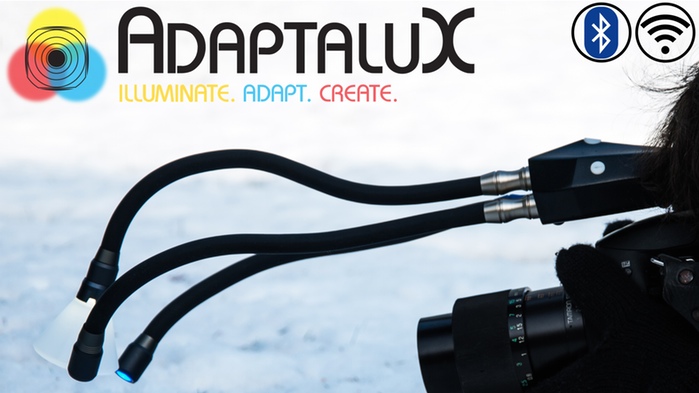 If you’re a macro photographer, then this Kickstarter project, if funded, could open a myriad of creative lighting options for you all in an ultra-portable, pocketable package. The Adaptalux was created by Samuel Granger who found that lighting a macro photograph was both costly and “cumbersome” and none of the lighting equipment designed for macro photography worked as well as he wanted them to.

Among the issues he had with macro lighting equipment were that the equipment was limiting. It would work only for only some subjects and not others; they took forever to set up or change; and they were not simple solutions for his lighting needs. With a background in Product Design, Samuel went to work creating something to solve his macro photography lighting problem and the result is the spindly-armed Adaptalux that is in its last few days on Kickstarter.

The Adaptalux is made out of three parts: the Control Pod, the Lighting Arms and the Effect Components. The Control Pod is Bluetooth and Wifi ready and is the main electronic component to the system. The Lighting Arms look like little octopus tentacles are an “unbelivably bright” light source with a continuous LED light that has an output of up to 165 lumens each. The five lighting arms with five different colors to choose from connects to the pod and are fully flexible, allowing you to have control of where the light falls. The Effect Components range from filters to diffusers, backdrop setters and more to offer limitless creative options for your macro photography.

With only 4 days left and just shy of their £100,000 goal, the Adaptalux is *this* close to being funded. The basic starter pack will retail at around £155 and you can add-on from there. Watch the video below and head over to the Kickstarter page to read more about the Adaptalux and to support this project.