SLR Lounge > Photography News > News & Insight > D800 for $2,200?! A Tale of False Advertising – Why I Will Never Purchase From Staples Again 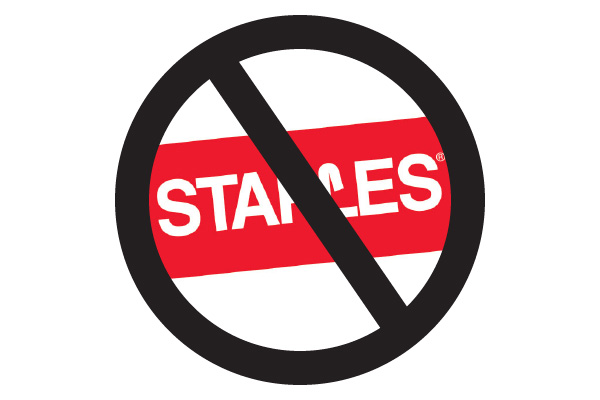 UPDATE: Many people are of the belief that we were unhappy because an incorrect or misprinted coupon wasn’t honored. This isn’t true. Read the entire article and you will see why we are unhappy. We are unhappy because of how the situation was dealt with, and how it seemed that the coupon wasn’t honored simply because we didn’t purchase the extended warranties as explained in the section “The D800 Deal Was No Longer Valid!?” below.

This is an opinion piece on a recent experience with Staples in regards to not honoring a coupon they themselves published. This isn’t the first time we have experienced a company not taking accountability for incorrect advertising. But, the overall inconsistency and approach to handling the situation is why we want to make our opinions public on such poor business practices.

How it All Started

Just yesterday (December 6th, 2012), Joe happened to stumble upon a coupon from Staples from mu-43.com, a Micro 4/3 forums. This coupon is directly from Staples website as shown by the following link :

Just in case they decide to remove the coupon link for some reason, here is a screenshot of the actual coupon. Note that it was not altered in any way, shape or form. 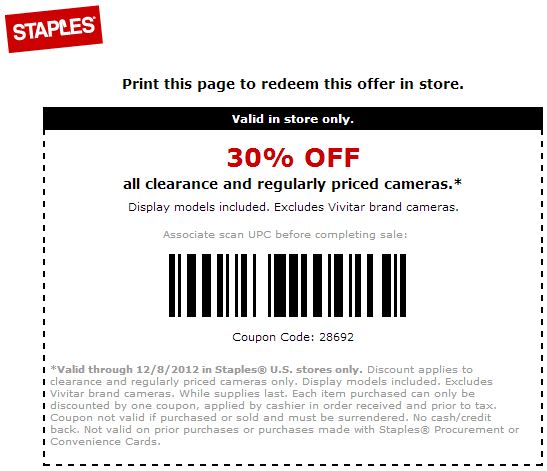 This coupon essentially states that you can get 30% off all clearance and regularly priced cameras. It includes display models, but excludes Vivitar brand cameras. The coupon must be redeemed in-store. However, it makes no mention that you may not purchase an online item in-store. Lastly, only one item may be discounted and the coupon must be surrendered.

So we thought, let’s head over there and buy some Nikon D800 in-store from the Staples online website. Sounds great right? They even have a specific kiosk for purchasing online items in-store. So it shouldn’t be a problem.

Just to make sure we don’t go waste our time, I said to our staff Joe and Tim, “why don’t we have one of you go there first, try it and make sure it works.” Who knows, maybe they will say that the coupon was a misprint or something. Joe and Tim went to the store, selected the item from staples.com, and then gave the Staples employee the coupon. The employee called the store General Manager whom we will here on refer to as “Bill”. Bill came and reviewed the coupon. Everything looked correct, Bill put in the discount and our staff left with our $2,200 Nikon D800. Don’t believe me? Check out the image below from Joe’s Samsung S3 showing the price at the register. 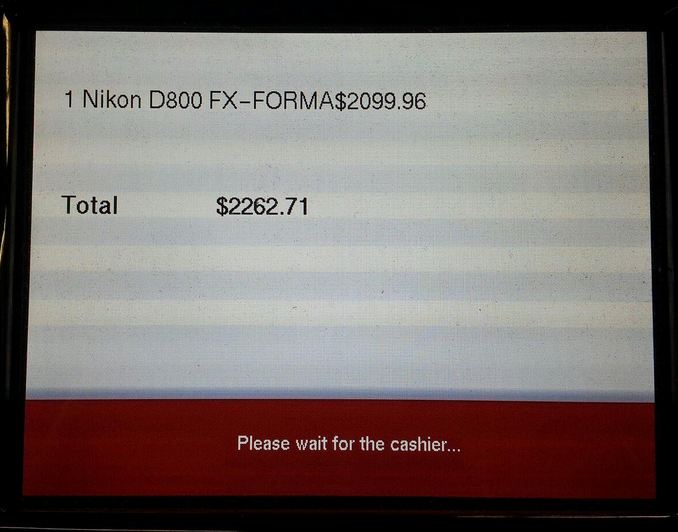 So, Joe and Tim confirmed that the deal was good, and it was indeed a good deal! At this point, Justin, Chris, Tony and myself took off to each go buy a D800. Great deal like this, we figured it was time to stock up for our studio. We knew that they would only allow one coupon redemption per person as they told them. So, we planned to take 4 coupons and get 4 more for each of our lead shooters.

Upon arriving, we each added a D800 to our online shopping cart and the same store manager Bill came over to help. Bill was polite, but seemed to be making up rules as he went along. At first, we choose the D800 kit online. He said the coupon couldn’t be used on the kit since it already showed that there was a “savings” on purchasing the kit and coupons couldn’t “double dip.” Again, nothing on the coupon mentioned that, and it seemed that Bill was making things up as he went along. No problem though, I didn’t argue, I just selected the D800 Body only ($2,999) which didn’t show any “savings”. He then stated that the coupon would be valid when applied to that item.

At this point, Bill vigorously insisted that we add the extra store purchased “warranty” to the orders. We told Bill that we haven’t had a good experience with store bought warranties, and that we also have insurance which covers everything anyway. Bill was cordial, but continued to aggressively press his point even to the point of saying word for word, “guys I am saving you $5,000 and you can’t give me any back? Help me help you.”

We explained to Bill our experience with store-bought warranties. How they often don’t cover what the sales people think they do, push back warranty service to the manufacturer, and so on. We know this because we are dealing with a B&H extended warranty on our Vivitar flashes. It has been an absolute nightmare. It doesn’t make sense to pay extra and deal with these warranty companies when it is covered already under our insurance.

Right after we said no for the final time and had our cards out ready to pay, Bill was clearly unhappy and said “hold on a minute, let me go and make a phone call to corporate just to make sure everything is good.” Bill leaves for approximately 15 minutes, comes back and then tells us that the coupon is only valid for in-store cameras. He would not honor the coupon.

Now I was quite unhappy, it felt like Bill went and checked with corporate simply because we didn’t purchase the additional warranties. At this point, for legal purposes I informed Bill that I write for an online magazine/blog, and our conversation would be going into an article on my experience.

I told Bill, “The coupon makes no mention of any restriction on purchasing an online or an in-store item. It simply says that the coupon must be redeemed in the store.” I also said to Bill that “if the coupon was in err, I would have expected that Tim wouldn’t have been able to purchase the D800 in the first place.” Bill remained cordial, he didn’t raise his voice or get upset, and said “Yeah, I talked to corporate, I am making the call on this.” Bill said, “I want your business, but I want it the right way.”

Now I was upset. “The right way?” I questioned Bill. I went on, “We are not breaking any laws here Bill. Your company posted a coupon online. You then honored it once, and now you are ‘making the call’ that you won’t be honoring it again. I understand that mistakes happen. Maybe the advertisement itself wasn’t written to include all of the correct requirements to the promotion. But, you aren’t even saying it was a mistake. Besides, if it was a mistake, how is that our fault or responsibility? How are we to know whether it was a mistake or not? What makes it wrong to try and come use a coupon your company released? Perhaps when Black Friday rolls around, I should question whether or not I really get $500 off a TV? I would have expected that Staples would honor the deal for those that are already there to redeem the coupon. Shouldn’t your company take responsibility for your own advertising, even if it is incorrect? At least plainly state that it was a misprint.”

While Bill remained polite, he simply reiterated, “I can’t honor the coupon, I am making the call.” He didn’t confirm nor deny the coupons validity or whether it was a misprint. Had he simply apologized and told me it was a misprint, it would have all ended there. Instead, after we rejected the extended warranties we were told we couldn’t get the deal because he was “making the call.”

As nobody was present, it would be impossible to prove whether or not Bill was actually on the phone with corporate, and whether they said to not honor the coupon. One thing is nearly 100% certain though, Bill would have made all the sales without question had we simply added the additional extended warranties. Bill was ready to ring us through the register and only stopped when we finally were certain we wouldn’t be purchasing the extended warranties.

Now let me tell you all we (Justin, Chris and I) run 3 businesses, Lin and Jirsa Photography, SLR Lounge, and UNDFIND. I fully understand that mistakes are made in regards to advertising. We have made plenty ourselves. However, we have always sided with the customer in every instance. In some circumstances, this meant giving away free or discounted products/services. But, the key point is that we always honored the advertised deal to clients/customers that had already seen it, despite it being correct or incorrect. If we had a problem with the advertisement, then once we were made aware we simply corrected the problem and moved on.

What does it say about a company who puts out a coupon, brings people into the store, chooses to not honor the coupon and to not admit it was a misprint? Shouldn’t companies take responsibility for their own false advertising? What do you all think? How about choosing not to honor a coupon because we didn’t purchase an extended warranty?

I am a reasonable person, I don’t expect a company to honor a coupon mistake that would put them out of business (though this most likely was not a mistake of that magnitude). If it was a mistake, they would have caught it within 10-20 coupon uses. But, at least have the good sense to admit that it was a mistake or a misprint and apologize. Instead of an explanation, all we got was “I am making the call on this.”

Conclusion and the Correct Coupon

In conclusion, all the stores were closed by the time we got out last night. This morning we tried one more Staples store to see if we could get the deal. We were told that an internal memo was already passed around to all the General Managers stating that the deal was printed incorrectly. Since then, the coupon has already been corrected online which is now as shown below: 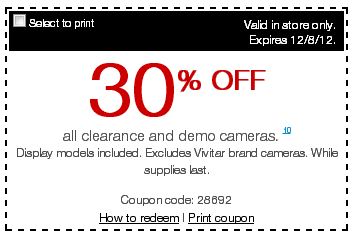 Before I end, let me add that not getting the camera really wasn’t a big deal. I was upset by how the company was handling the situation. How it seemed that the only reason we didn’t get the deal was due to not purchasing the extended warranties (whether that was the case or not would be impossible to prove). How there was a complete lack of accountability for their own mistake. How there was no apology nor was their any admittance that the coupon was a mistake to begin with. Instead, it was simply “I am making the call, I can’t honor it.”

We aren’t looking for anyone’s sympathy (because seriously, we obviously don’t NEED 5 Nikon D800, we all just wanted the nice upgrade, haha!). But, our business isn’t going to suffer because we don’t have this camera upgrade. This article is simply an opinion piece and we want to hear your thoughts and opinions on these types of business practices. However, it does go without saying that due to their lack of accountability and understanding, as a company we will never patronize Staples again. Oh well huh?

Nikon D800 is available at Amazon.com