5 Techniques to Level Up Your Street Portraits

Video: 5 Techniques to Level Up Your Street Portraits

In this article/video, we’re going to work through some typical scenes that you might encounter when shooting street portraits, and I’ll share five ideas and compositional techniques to help level-up your street photography. I recently had a chance to hit the streets with my friend, David Suh, who is an awesome photographer. We went to downtown Pasadena, as well as Santa Monica, to photograph strangers. Even though I’m out photographing strangers, the tips and techniques I’m sharing here will work equally well for working through engagement or wedding portrait sessions. You can fall back on these techniques if you ever find yourself scrambling to get an interesting shot, regardless of the circumstances.

Truth be told, I’d never done this before. I found it to be a great learning experience, especially when having to walk up to somebody, ask permission to take their picture, build a rapport, and then shoot the images, all within a two-minute window. I’ll save the how-to and my tips on that for another article. For now, I’ll focus on a subject that I’m more familiar with, which is how to create great compositions in different locations. These tips will come in handy when you’re pressed for time. As a wedding photographer, this is something I’m very familiar with. 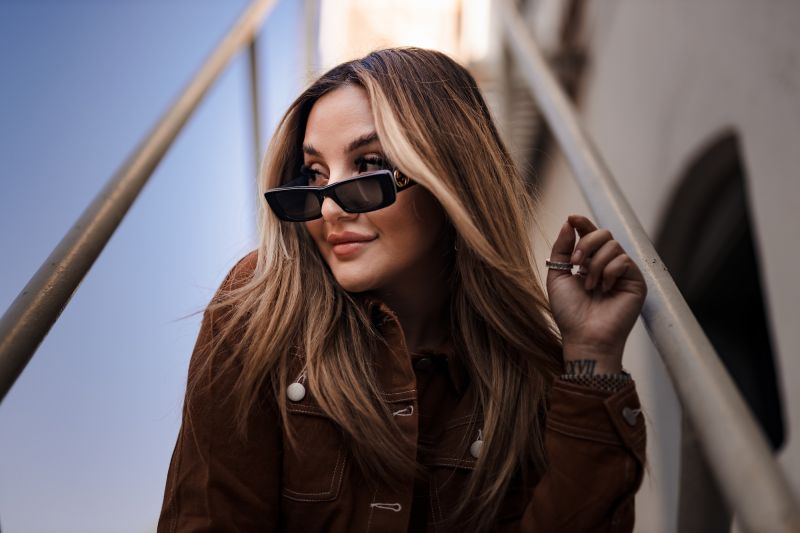 The very first stranger who allowed us to take her picture was Erica. She was actually out shooting with her friend because she owns a clothing brand, which you can find here. David went first to photograph Erica, which gave me an advantage as I was able to look around for a backdrop. The first thing I noticed was a staircase, which is common in city and urban environments. Staircases make for an interesting backdrop, but they also work compositionally to provide leading lines. When it was my turn to shoot, the first thing that I had Erica do was actually move up on the staircase. I wanted to get down low and use the lines and the staircase itself to frame and lead into Erica.

Another great thing about this particular staircase is that it’s basically sandwiched between two buildings, so we have light blocked on each side with an overhead strip of sky, which sort of acts like a giant strip box. This giant soft strip box has fantastic lighting, especially if she looks out toward the light (see image below).

For this shot, I kept the camera angle low, shooting from the bottom of the staircase, going up. I would have loved to have shot this on a 35mm, but I didn’t have one with me. Instead, I used a 50mm on an EOS R. When you’re doing street portraits (or any type of portraiture), one of the mistakes that I see people make often is moving on too quickly after they get a couple of shots. For example, I took three shots, and I liked all three of these, but I still had more time, so I looked for different angles (think wide, think medium, think tight). I started wide and then worked my way, capturing more details as I moved closer to the subject.

Capturing these different angles allows me to tell this entire story, especially knowing she has a clothing brand. I wanted to feature the clothing, the items that she’s wearing, which also explains why we’re having her look away from the camera so that our focus is drawn to the clothes. 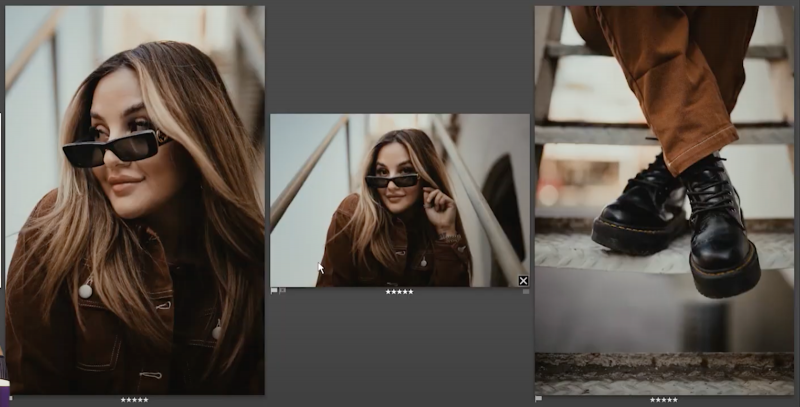 I shot all of the images in this set in under two minutes.

Urban locations tend to have very interesting walls and textures, so when I saw this red brick wall, I knew I wanted to shoot against it. I just needed to find one or two people who would agree to be in the shot. Luckily, we found two young business women who were selling chocolates nearby. In case you’re wondering, of course we bought some chocolates.

Anyhow, I want to point something out here; let’s compare a couple of shots (see above). Because I didn’t have anything wider than a 50mm, I started with a straight-on shot with just a little bit of brick, and it looks very much like a walk-up or point-and-shoot photo. It might’ve looked more interesting if I had a wide-angle lens to showcase more of the environment, but I didn’t. What I want you to do when you’re featuring walls and texture is to take an angle, especially if you can shoot at a shallow depth of field. Doing so will exaggerate the lines in the frame and result in something like the shot on the right, which is far more interesting than the walk-up shot on the left.

I started by photographing the girls from an angle and captured a series of images within the one or two-minute limit we set for ourselves during the shoot. While I try to think of different shots I want to capture, I often fall back on things that I already know work. I shoot a lot of couples portraits, for example, and I’ve found that if you’re working with two subjects, it’s very easy to use one of them to help frame the face on the other person. In this sequence, I asked one of the friends to stand behind the other one. I then focused on the person in the background while using the person the front to kind of frame the other person’s face. I love the look of these types of portraits and they’re easy to set up. If you’re ever out in these locations with two subjects and you find yourself grasping for ideas, just open up your aperture and capture a shot like this with one person framing the other.

Make an effort to think about how to use foreground, and whenever possible, think about the story as well. One interesting thing that you can do that works well anywhere is getting close to an object and focus on one piece while allowing the other part to go out of focus. While shooting in Pasadena, we met a trumpet player named Barry. I thought this technique would work perfectly for Barry’s portrait. I didn’t necessarily have the backdrop that I would want, but what I did have was a great prop in the form of his trumpet. He is a fantastic musician, so it makes complete sense from a storytelling angle to include the instrument.

I moved in close to focus on his face while allowing the trumpet to extend out of the frame. As you can see, with this type of composition, there’s no need to worry about having a perfect background. I simply framed Barry against a white wall. 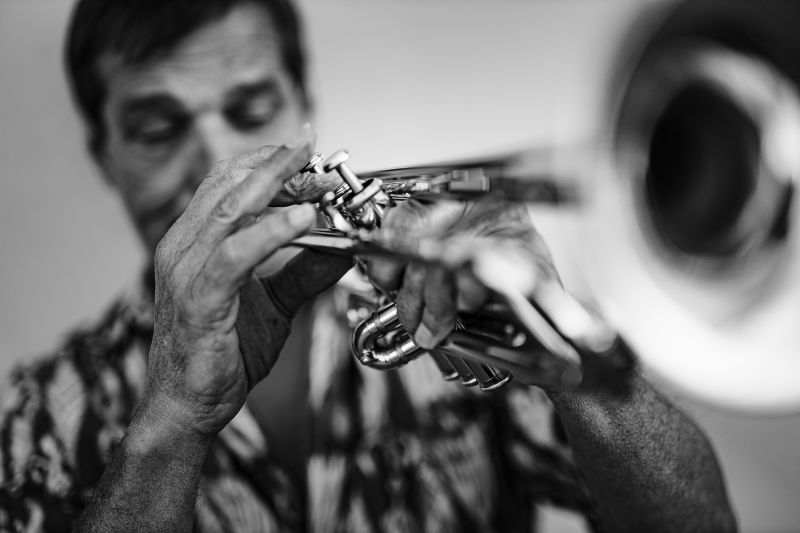 After I captured a couple of shots, I shifted my focus to Barry’s hands. While I’m focused on the hands, Barry’s eyes do not (and should not) look into the camera. To get a more authentic portrait, I asked Barry to look down and play the trumpet. If he would’ve looked into the camera while his eyes are out of focus, it would look like I made a mistake. 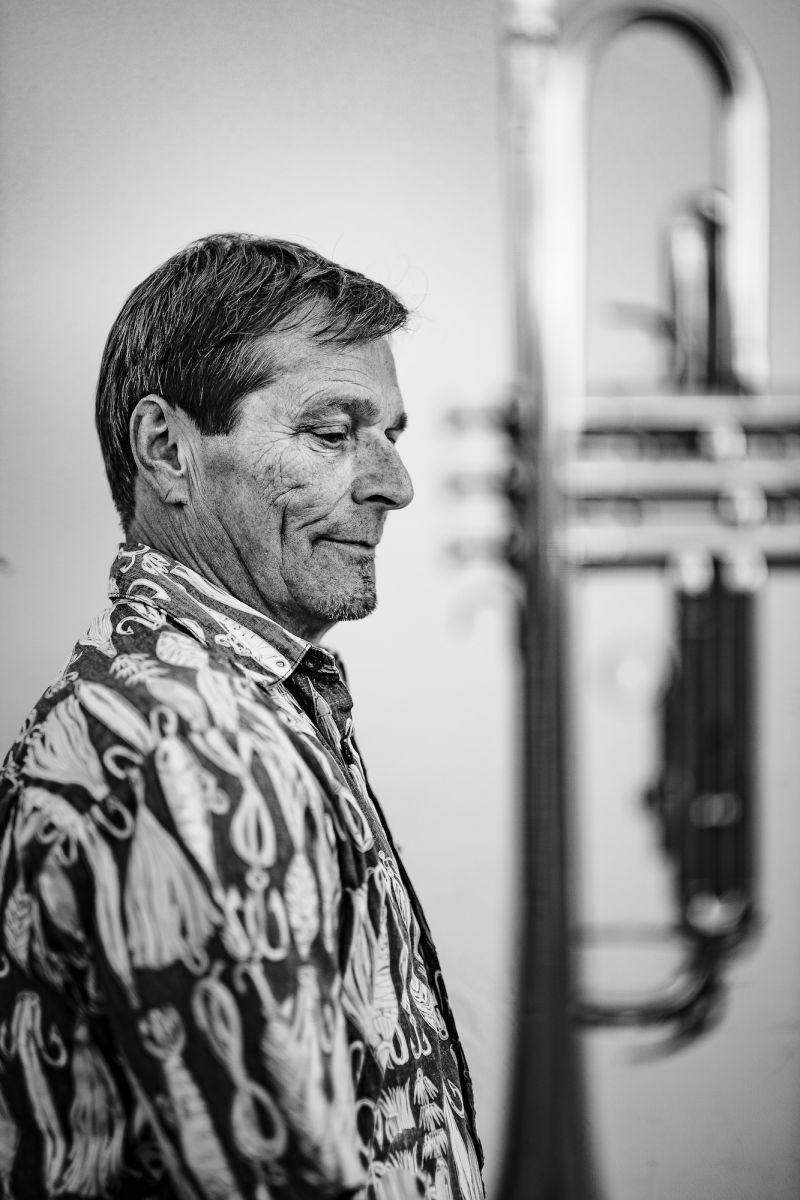 In another shot, I wanted Barry to stand up against the wall while I held his trumpet in front of my lens. I shot the image using the trumpet as an out-of-focus foreground element, but you can still tell what it is. The trumpet also frames Barry against the white wall. Who would’ve thought that a simple white wall could provide so many options? 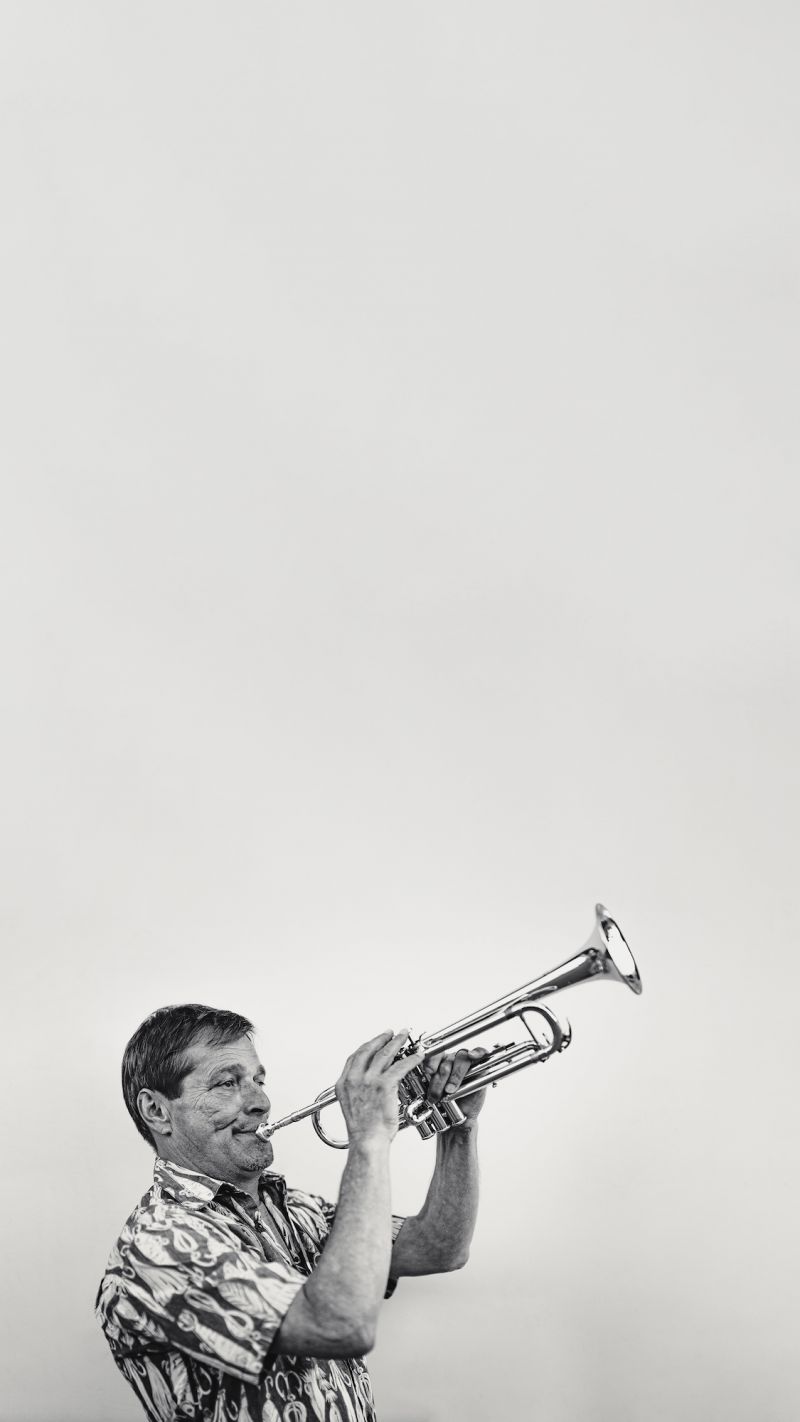 Yet another compositional tool you have available when shooting against a clean white wall is negative space. The above shot uses negative space to draw attention to Barry. I could dive deeper into how I thought of this shot, but the point here is that you have a lot of control over the story you’re telling with just depth. With a prime lens, it really doesn’t matter what the background is. Even when you’re stuck with a white wall, you can still get a lot of really great stuff out of it.

Urban environments can sometimes offer visual overload, but there are a lot of objects we can use to conceal different parts of the frame. While shooting Nicole, I liked how it looked when I let the flare enter the lens. What I didn’t like as much about this scene was all the number of cars in the scene, or just off to the side of it (see the BTS image above). To “fix” this, I stood against a ticket machine (where you buy your parking passes) and I used it to frame out all of the cars. What was once an obstacle now becomes an interesting foreground piece. I then allowed just a bit of sun to poke through.

Another ubiquitous element in urban environments are reflective surfaces. Even a simple storefront window can be used to add visual interest with a reflection.  While out capturing street portraits, we met Boris, who agreed to let me take his picture while he was hanging out and waiting for a business meeting to start.  I asked Boris for just a couple minutes to take a picture and he agreed. 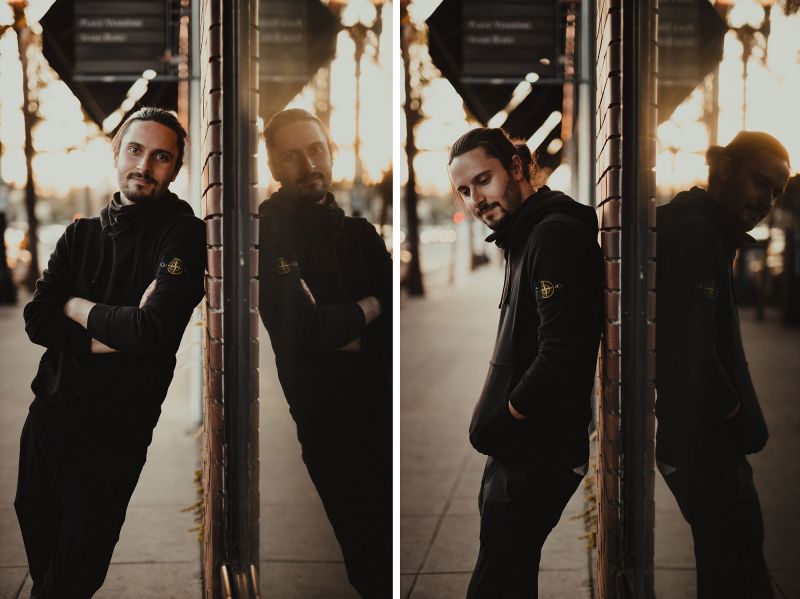 For these shots, I asked Boris to lean up against a brick wall near a store’s front window. It not only backlit Boris but also gave me a great reflection to work into my composition. While here, I captured a sequence of shots from a few different angles.

I hope you all enjoyed the article/video and are walking away with tons of ideas when it comes to shooting urban portraits. We have a lot of composition tools at our disposal, including those that are already built into the environment. If you’d like to dive deeper into your photography educations, we cover all of the tips and techniques included here in more detail in our full workshops, all of which are part of our Premium subscriptions.

DJI Added to "Economic Blacklist" in the United States